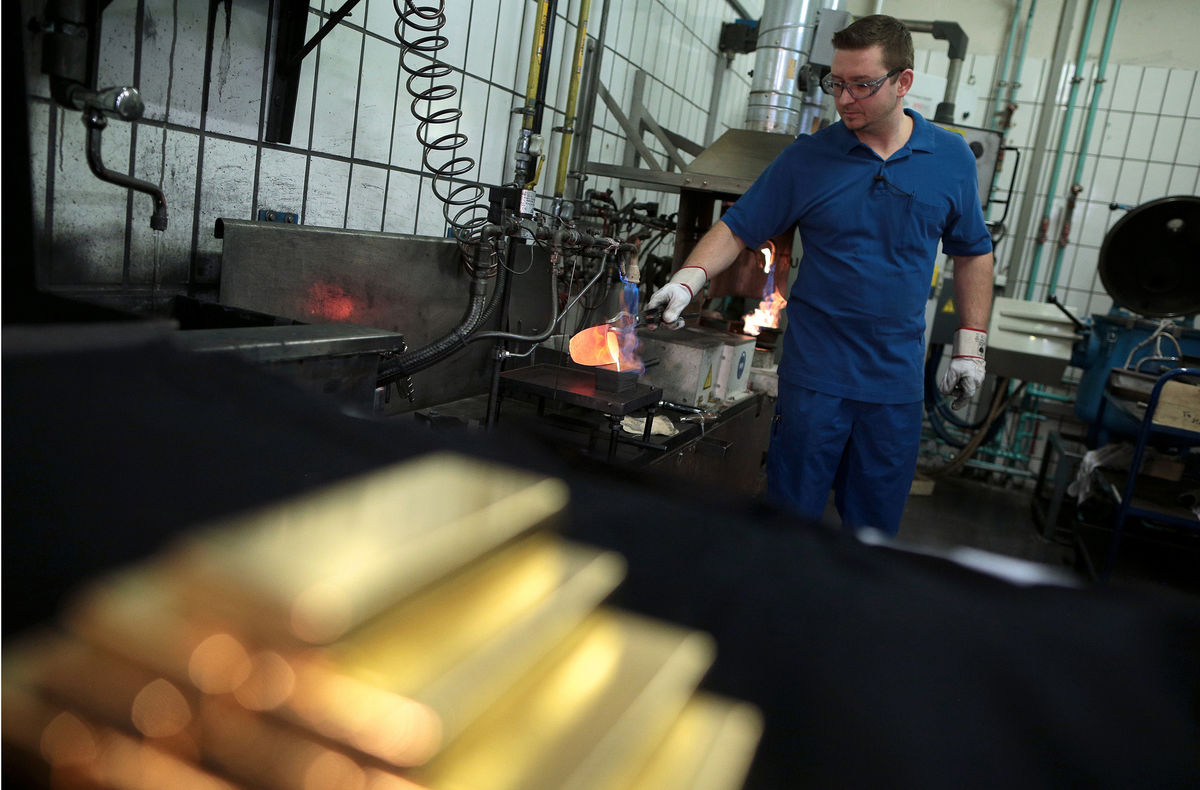 Investors’ desire for precious metals is deepening after Mario Draghi’s $1.2 trillion pledge drove gold to a five-month high and silver to the brink of a bull market.

Their buying helped boost the value of exchange-traded products backed by gold and silver by $8.2 billion this month, the most since September 2012, data compiled by Bloomberg show. Hedge funds and other speculators in futures and options are the most bullish on gold in two years and have bet more on silver in all but two weeks since the start of November.

At a time when the price of almost every other commodity is sinking, silver and gold are headed for monthly gains. The European Central Bank president’s stimulus sent the euro to an 11-year low against the dollar, pushed government bond yields lower and raised the appeal of alternatives to currencies that are being revalued.
[dt_quote type=”pullquote” layout=”left” font_size=”big” animation=”none” size=”1″]“Silver is tied to gold, and they move with trust,” David Rosenberg, the Toronto-based chief economist at Gluskin Sheff & Associates, which oversees C$8 billion ($6.4 billion), said Jan. 22. “There’s an increasing number of global investors who are starting to lose trust in the world’s central banks.”[/dt_quote]

The net-long position in gold climbed 27 percent to 145,732 futures and options in the week ended Jan. 20, according to U.S. Commodity Futures Trading Commission data. The same measure for silver reached the highest since July.

Gold fell 1 percent to settle at $1,279.40 an ounce on the Comex in New York today, after touching the highest since August last week. Silver fell 1.7 percent to $17.983 an ounce today. A settlement at $18.496 would leave the metal up 20 percent from the closing low in November, meeting the common definition of a bull market.

Silver’s 15 percent advance this year in futures is almost twice the gain in gold. Even so, gold is still trading at about 71 times the price of silver, compared with an average of 58 in the past decade.

Evidence of demand in the physical market is also apparent. China’s silver imports climbed in December to the highest since February, customs data showed last week. The U.S. Mint sold a record 44 million ounces coins made from the metal in 2014.

Goldman Sachs Group Inc. says low inflation and higher U.S. interest rates will drag down gold prices later in 2015. The bank forecast an average of $1,089 next year on Jan. 23, from a previous estimate of $1,200. Bullion dropped 29 percent in the previous two years, and silver plunged 48 percent as the American economy improved.

Weakening global growth will hurt industrial demand for silver, used in solar panels and electronics, according to Jessica Fung, a commodities analyst at BMO Capital Markets in Toronto. The International Monetary Fund last week made the steepest cut to its global growth outlook in three years.

“Even though we forecast a little bit of growth, it is not strong enough to impact the silver price at this point, because we also have growth on the supply side as well,” Fung said by phone Jan. 21. “That’s keeping the physical market in check.”

A measure of net-long positions across 11 agricultural products fell 8.6 percent to 415,186 contracts.

Investors increased their bets on a cocoa rally before prices capped the longest rout in more than two years. The net-position rose 1.3 percent to 51,769 contracts. Long holdings slid 2.7 percent, while short wagers dropped 14 percent, indicating that some bearish speculators locked in profits as prices fell.

Cocoa futures are down about 19 percent since touching a three-year high in September after an outbreak of Ebola didn’t hamper shipments from West Africa, which produces 70 percent of global supply. Bean grindings fell in the fourth quarter in Asia, Europe and North America, signaling waning demand.

“There was probably some inventory building ahead of Ebola concerns, and that’s being worked down,” Walter “Bucky” Hellwig, who helps manage $17 billion at BB&T Wealth Management in Birmingham, Alabama, said by phone Jan. 22. Prices are “continuing to reflect the Ebola premium coming out, better supply conditions and, perhaps, a decline in chocolate demand.”