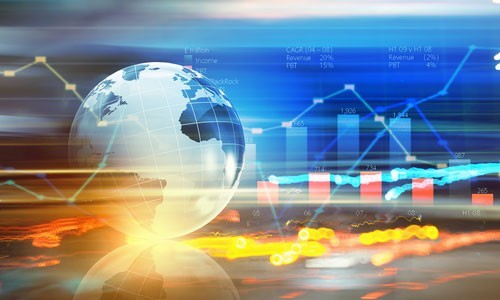 An unsettling trend has emerged from the heavy selling that sent global markets tumbling this year: Investors are getting nervous about the world’s biggest banks.

The concerns about the banks are clearly reflected in the stock markets, where shares in banking giants are plunging. But there are also ominous signs in markets that investors use to bet on the perceived creditworthiness of large financial firms.

A crucial benchmark for the banking sector, the KBW Nasdaq Bank Index, was down more than 3 percent on Monday and had lost nearly 20 percent of its value this year.

There were other signs of nervousness.

Investors are again rushing into benchmark government bonds. The yield on the 10-year Treasury note, which falls as its price rises, declined to 1.75 percent on Monday; it yielded 2.27 percent at the end of last year. The price of gold is rising. The Vix, which measures investors’ expectations of volatility and is known as Wall Street’s fear gauge, rose over 10 percent.

But the plunge in bank stocks seemed to stir up the most concern.

When investors sell bank shares or bet against the banks in credit markets, it can be a signal that a period of financial turbulence has entered a new, potentially more serious phase. It suggests that banks — meant to act as the gears of an economy, transmitting credit to firms and households — are becoming more vulnerable to the market volatility and any underlying economic weaknesses. In sluggish economic times, banks may suffer higher losses on some loans, while the current low interest rates make it hard for lenders to earn robust profits on other loans.

Analysts noted that the declines in bank shares had occurred as other traditional indicators of fear flashed more brightly. “The fear trades are becoming more obvious — and one of those is dumping financial stocks,” said James W. Paulsen of Wells Capital Management.

It was not just bank stocks showing pain.

The Standard & Poor’s 500-stock index was down by more than 2 percent for much of Monday but, after a late rally, the benchmark closed down 1.42 percent. It has lost over 9 percent of its value this year and is now 13 percent below the nominal high that it reached last year.

The Nasdaq index, which contains many technology stocks, declined 1.82 percent. It is now 17.92 percent below the nominal high that it reached last year. A decline of 20 percent or more would put the Nasdaq in a bear market.

While many large technology companies have strong profits and sturdy balance sheets, their shares are often highly valued, making them vulnerable when markets sell-off. And some analysts think the fall in technology shares is a sign that the froth is finally coming out of the market, putting it close to a bottom. “This is reminiscent of the late stages of a correction rather than the early part of one,” Mr. Paulsen said. Correction is the Wall Street term for a market decline of 10 percent or more.

Still, the recent plight of bank stocks does not bode well.

On Monday, shares of Deutsche Bank, Germany’s largest bank, plummeted nearly 10 percent in Frankfurt, while those in Standard Chartered, a British bank, fell nearly 6 percent, and stock in Citigroup declined more than 5 percent.

Deutsche Bank and a handful of other European banks are contending with their own problems that could explain the depth of their recent declines. Banks issue debt to raise money for their loans and operations. In recent weeks, investors have paid a higher price to buy insurance against a bank defaulting on such debt. The cost of using so-called credit-default swaps to gain protection for five years on Deutsche Bank’s debt has doubled since the start of this year, according to data from Markit.

Outside of Europe, though, the moves in bank shares are hardly reassuring.

Citigroup’s shares, for instance, are down by more than a fourth so far this year. And its stock trades at nearly half of the bank’s book value, which is a theoretical measure of the value that would be left for shareholders if the bank were liquidated. The discount to book value exists at other large banks and effectively indicates that investors have doubts about the banks’ ability to earn a strong return on their capital.

Still, Citigroup made over $17 billion in profits last year, has stable management and, looking at its balance sheet, possesses the financial strength to weather an economic slowdown.

There is a good chance that investors have become too pessimistic about the big banks’ prospects, and their stocks could bounce back if the wider funk in the market passes. Most banks, after all, are substantially stronger than they were in 2008. And, since then, the banks have managed to earn profits even as they have dealt with a barrage of government lawsuits as well as economic and financial turbulence in Europe and Asia.

Still, the declines in bank shares may not indicate that banks are particularly fragile right now but that investors think they will struggle to earn solid profits in the future, at least in part because of ultralow interest rates around the world.

Monday’s trading illustrated the deep stress in the energy sector. Shares in Chesapeake Energy, a beleaguered oil producer, lost a third of their value on Monday. The trade publication Debtwire reported that Chesapeake had hired restructuring lawyers at Kirkland & Ellis, leading investors to speculate that Chesapeake was considering filing for Chapter 11 bankruptcy protection as the low price of oil weighs on the energy industry.

Chesapeake put out a statement late Monday morning that Kirkland & Ellis had been one of its legal advisers since 2010 and was counseling the company in its financial restructuring efforts. But the oil driller took pains to note that it “currently has no plans to pursue bankruptcy.”