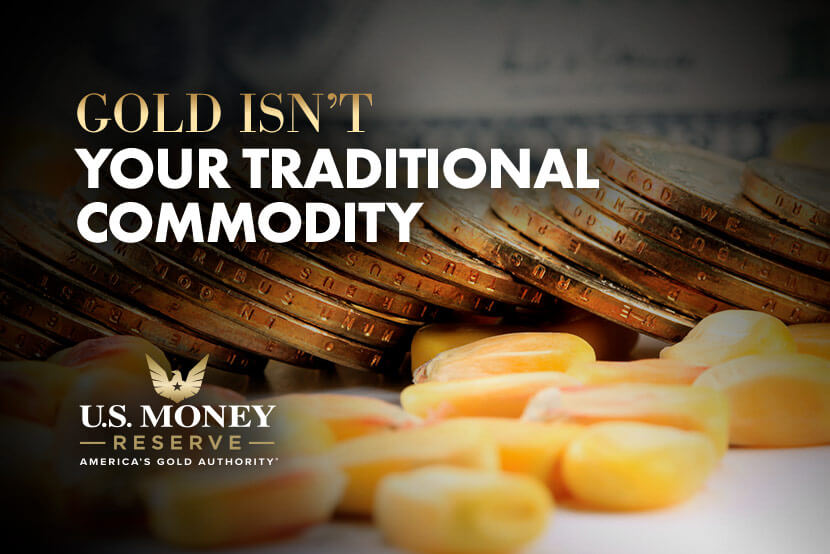 Is Gold a Commodity? Yes, But It’s Not a Traditional Commodity.

When we think of commodities, our minds might immediately drift to products like crude oil, coal, corn, and sugar. We might call these the “dictionary definition” of commodities. Gold, too, is a longstanding commodity, though I hold that gold is not a “traditional” commodity—and it could be a beneficial addition to your portfolio because it’s more than just a commodity.

What Is a Commodity?

Let’s start by defining the term “commodity.” A commodity is a product, such as a natural resource or agricultural product. The individual units of a commodity are essentially interchangeable.

Examples of commodities include:

Is Gold a Commodity?

In a fungibility respect, yes—gold is a commodity. Any ounce of gold is interchangeable with any other ounce of gold (of the same purity). But that’s where the similarity between gold and other commodities ends.

There’s a reason why thousands of years ago, humans adopted gold, rather than some other
commodity, as a medium of exchange in their commercial lives: Gold’s combination of luster, malleability, density, and scarcity sets it apart from all other commodities known to humankind. Gold is uniquely portable, identifiable, and available in finite quantities—the perfect combination for a reliable medium of exchange and store of wealth.

As Dr. Adam Hayes, a lecturer at the University of Wisconsin-Madison and Hebrew University of Jerusalem, explains, “Like no other commodity, gold has held the fascination of human societies since the beginning of recorded time. Empires and kingdoms were built and destroyed over gold and mercantilism. As societies developed, gold was universally accepted as an acceptable form of payment. In short, history has given gold a power surpassing that of any other commodity on the planet, and that power has never really disappeared.”

The role of gold has been so vital in the past that it served as the basis of monetary systems around the world for more than 300 years, dating from England’s Great Recoinage of 1696.

Over the next 125 years, gold vied with silver and paper money for dominance, until Great Britain formally established a gold standard in 1821, the first nation to do so. Originally operating on a bimetallic system of gold and silver, the United States followed suit with adopting a de facto gold standard following the Coinage Act of 1834. An international gold standard emerged after Germany adopted one in 1871. By the turn of the century, most developed countries were linked to the international gold standard, which prevailed until 1914, when the Great War severed relations among nations worldwide.

Fifty-seven years later, in 1971, President Nixon finally ended the direct convertibility of U.S. dollars into gold. Then, over the next nine years, the price of the yellow metal rose from $35/oz. to almost $700/oz.

The gold standard helped curb the power of central banks, anchor world currencies, and add predictability to international exchange rates. In addition, gold has long been viewed as a hedge against inflation and a store of wealth, and it has served as a critical financial asset for nations and their central banks.

“For thousands of years, gold has occupied a unique role in the financial systems of cultures worldwide. Unlike virtually every other commodity, gold has [appeal] far beyond its applications in industry,” Commodity.com says.

Why Can Gold Be Considered a Top Commodity?

In a 2021 report, the World Gold Council outlined several reasons why gold, in the form of bullion coins and bars, is the “most effective” commodity asset. It has:

The World Gold Council also notes that gold allocations of 2 to 10% in a typical retirement portfolio have delivered better risk-adjusted returns than those with broad-based commodity allocations.

“Ultimately, commodities can be a relevant tactical asset, but a strategic gold allocation can supplement or replace a broad-based [position] in commodities alone, as it may offer more widespread benefits,” the Council says.

As a commodity, gold serves as a “good counterpoint” to traditional securities like stocks and bonds, adds Bankrate.

Request a free Gold Information Kit to learn more about the benefits of gold as a portfolio diversifier.