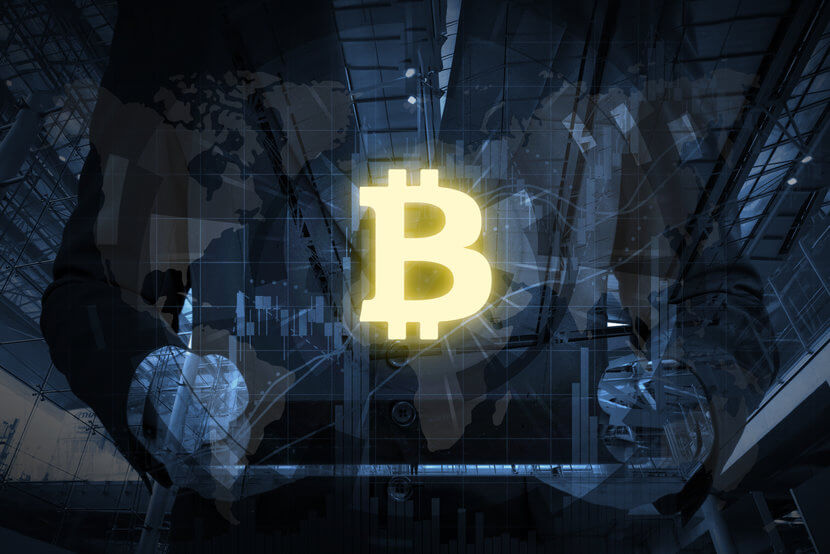 Will Cryptocurrencies Ever Replace Gold?

Gold has been shining bright for thousands of years, including the year 2017. Gold prices gained 9 percent in the first quarter and 10 percent so far this year, reports Nasdaq. Despite such success, gold has taken a backseat to cryptocurrencies in some circles, leaving precious metals owners and market analysts alike wondering, “Could there be a new gold of the digital era?” It's a valid question, but one that could be based on faulty reasoning. Read on to learn about cryptocurrencies, the risks associated with the most popular cryptocurrency, bitcoin, and why it can't compare to one of the world's oldest stores of wealth—gold.

A cryptocurrency is a digital currency that uses cryptography for security. It lives within the internet and has no single governing authority. Cryptocurrencies make it easy for parties to anonymously transfer funds to one another without the interference of a financial institution and at little to no cost.

Bitcoin: The most popular cryptocurrency

As of July 2016, there were more than 710 cryptocurrencies available for trade in online markets, with bitcoin reigning as the most popular. Bitcoin is a digital currency based on math. It was created in 2009 by an anonymous individual, alias Satoshi Nakamoto, who determined the rules for how bitcoin would be used.

For a transaction to occur within the bitcoin system, a complex mathematical puzzle must be solved. Solving the puzzle essentially verifies the transaction and updates a public ledger, a ledger that can be accessed by anyone with an internet connection. Though the ledger is public, bitcoin transactions are anonymous. Names of buyers and sellers are never revealed, only digital wallet IDs.

Bitcoins can be bought or sold using different traditional currencies on cryptocurrency exchanges, as well as earned or “mined” by solving complex mathematical puzzles. Through “mining,” new bitcoins enter the marketplace.

A quick note! Bitcoin is complex. We've provided a brief overview, but we encourage you to keep learning. Check out CNN Money's infographic, What is Bitcoin? to get started.

So, will cryptocurrencies replace gold? Doubtful.

The rise in media attention for bitcoin has led many to wonder whether cryptocurrencies are on their way to replacing gold, the world's oldest store of wealth. On the surface, cryptocurrencies seem to have many advantages: they function outside of central banks and governments, give users control over their wealth, and provide a certain layer of anonymity. Dig deeper, however, and the risks start to outweigh the benefits. Could cryptocurrencies, especially bitcoin, push gold to the side? It's doubtful and here’s why:

Cryptocurrencies are vulnerable to cyber theft

Cryptocurrencies exist on digital exchange platforms that are vulnerable to cyber-attacks. They’re accessed through the internet and could not exist without the internet.

Countless hacks have already occurred where bitcoin is concerned. Back in 2014, Mt. Gox was the premier bitcoin exchange…until it practically imploded. The exchange filed for bankruptcy, citing that hackers stole 850,000 bitcoins worth about $590 million, cites Credit Suisse. Only 24 percent of those “coins” were recovered. In 2011, hackers lifted the equivalent of $8.75 million from the same platform, reports Wired.

Recently, in August 2016 hackers stole 119,756 bitcoins on the platform Bitfinex, worth an upwards of $70 million. “The cyber theft led to the accounts of all customers on the exchange receiving a haircut of 36 percent,” reports CNBC.

Is physical gold vulnerable to cyber theft? No. Is it dependent on the internet? No. Without the internet, bitcoin would disappear, but gold wouldn't. Physical gold has been a reliable medium of exchange for thousands of years and has a track record you can rely on. It can be held in your hand, stashed in your closet, or carried in your pocket. Gold exists in the real world, not the digital world.

Cryptocurrencies can be unpredictable, even volatile

Bitcoin is “known to be highly volatile with wild price swings,” explains CNBC, with fluctuations of over $100 in a matter of hours. “A comparison on bitcoin's performance over the past year against the Nasdaq—a tech-heavy stock index—and the typical safe-haven asset of gold, shows that the cryptocurrency has more in common with the former.” Researchers at Stansberry Churchouse make a similar point, arguing that bitcoin is “way more volatile than gold.” 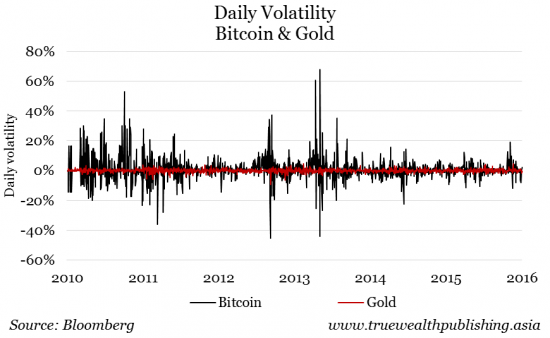 Just take a look at the chart above. Gold's movement remains relatively steady while bitcoin seems to bleed up and down the page.

Credit Suisse's European Tech analysts further report that the value of bitcoin “has been three times as volatile as the price of oil and 11 times more than the post-Brexit exchange rate between the dollar and the British pound.” Could something that temperamental be a reliable payment method or store of wealth?

Is physical gold unpredictable? Bitcoin's unpredictability is well noted. Given that it's been around for less than 10 years, the cryptocurrency doesn't have a lot of historical data to lean on. Gold, however, has decades of recorded data from which buyers and market analysts can consult. We can say with confidence that historically when stocks go down, gold goes up. What can you say about the movement of bitcoin and other cryptocurrencies?

Let's revisit the chart above. Imagine that gold's movement is like the wave pool at a water park, while bitcoin’s is like whitewater rapids in the Grand Canyon. Where would you rather hang out?

Physical gold is real money that stays in your control. Designated official legal tender, the 1 oz. Gold American Eagle Coin is backed by the U.S. government for its gold content, weight, and purity. It's recognized by financial markets worldwide and is an international standard of trade. Call 1-844-307-1589 to buy gold today. You could be holding it in your hand within the week.

Bitcoin isn't the only cryptocurrency out there. It just happens to be garnering the most attention. There are hundreds of digital currencies in existence and anyone with an internet connection and some web knowledge can create a new one. With so many to choose from, what if you pick the wrong one? What if the one you choose falls out of favor in a few months or years? What if your country deems cryptocurrency transactions illegal? It could happen.

Both gold and cryptocurrencies can provide the economic freedom to transact across borders without institutional interference, but cryptocurrencies come with geographic limitations. Norway, Thailand, Russia, Bangladesh, Bolivia, Ecuador, India, and Korea have all taken a stand against bitcoin, either rejecting it as a currency or banning cryptocurrencies outright. In Bangladesh, any transaction through bitcoin or another cryptocurrency could lead to a punishment of up to 12 years in prison. Talk about risky business!

Is the future of gold uncertain? Far from it. Gold has outlasted every government and paper form of money—making it essentially the only global currency that has stood the test of time. And unlike most cryptocurrencies, many types of gold coins are authorized as legal tender in their respective countries.

Demand for physical gold remains strong today, with demand for gold bars and coins up 9 percent year over year, writes Nasdaq, and above the 100 tons milestone—the fourth time on record. (Remember? There are records we can consult when it comes to gold!) Meanwhile, gold supply is declining, a fact that's governed by the laws of nature, not the laws of an anonymous cryptocurrency creator. Call 1-844-307-1589 to talk about your financial future and how gold can play an important role in shielding your wealth from the digital doom that could be on the horizon for bitcoin.