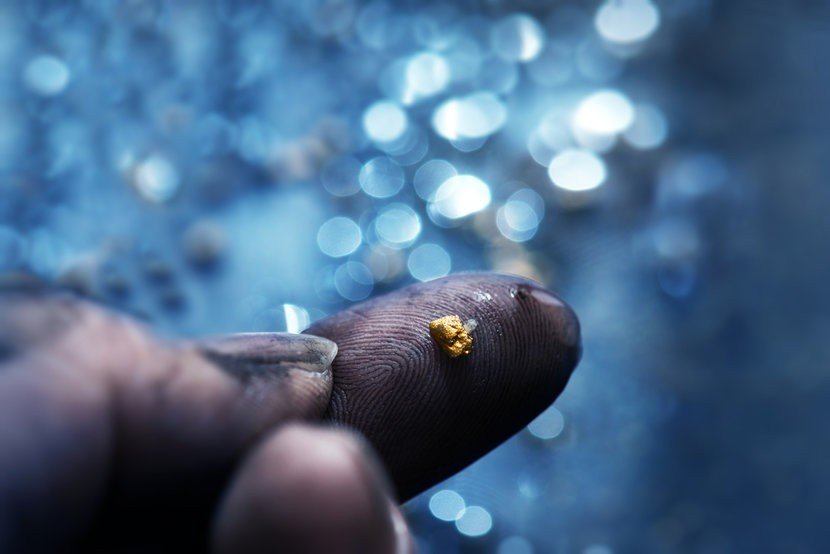 With Gold Supply Declining, Are Prices Set To Rise?

Gold is up almost 5.5 percent since the start of the year, reports Kitco, and could be set to continue its uptick in the shadow of an uncertain Trump presidency. While few analysts and news outlets seem to want to separate movement in gold prices from the new president-elect, there's another factor that's set to support gold prices for much longer than any presidential term, and that's a reportedly dwindling gold supply. Global gold output has been contracting since 2013, writes Business Insider, and the outlook isn't looking bright and shiny. Read on to learn more about the current state of gold output, how it could impact gold prices, and what analysts are predicting for the years to come.

The state of gold output

Less gold is being discovered

There's only so much recoverable gold in the world, which is one reason the precious metal is so highly sought after around the globe and has been for much of recorded history. Gold remains one of the rarest elements in the world, making up roughly 0.003 parts per million of the earth's crust. To get more, you have to dig more.

Nowadays, though, more digging isn't necessarily resulting in more gold. Producers' budgets for finding gold have increased over the past decade, while new finds and overall mine supply have decreased.

“The amount of gold discovered last year was down 85 percent compared with 2006,” writes BloombergMarkets, as illustrated in the graph below. 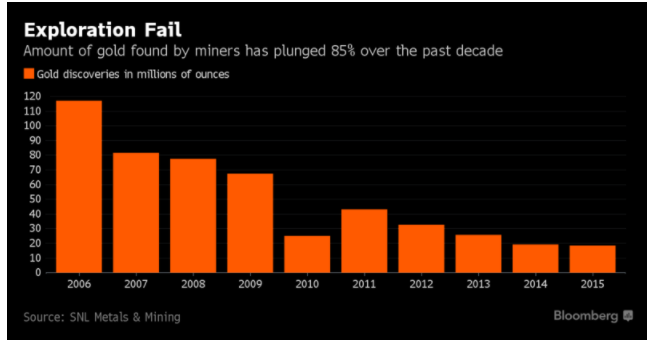 More broadly, reports Thomson Reuters, “there are relatively few new projects and expansions expected to begin producing this year, and those in the near-term pipeline are generally fairly modest in scale, underpinning our view that global mine supply is set to begin a multi-year downward trend in 2016.”

First, note that mining reserves are different than bank reserves. In the U.S., the Federal Reserve requires certain financial institutions to set aside funds in order to deal with unexpected bank runs or large withdrawal requests. A reserve acts as a buffer to protect the financial institution from certain liabilities.

A mining reserve, on the other hand, is the amount of known metal that's economically worth mining. As defined by Nordic Mining, it is an “economically mineable part of a mineral resource where appropriate assessments and studies have been carried out to show that the deposit can be mined at a profit after consideration of all factors impacting a mining operation.” In short, it's the amount of gold a mining company determines is economically worth their time to mine.

As BloombergMarkets illustrates in the graph below, major gold producers' reserves have shrunk by 40 percent since 2011. Mining companies continue to invest in exploration and assessment, but to little avail.

Supply and demand: Gold in action

Even though uncertainty around Donald Trump's presidency, future interest rate hikes, relations with Russia and China, slow economic progress, and a host of other international risks are all currently spurring demand for gold, the supply may not be there for long. Understanding the economic concept of supply and demand is foundational to understanding how the price of gold could be impacted by the current gold mining situation.

As Goldcorp's CEO points out, the industry doesn't currently have the gold supply to meet increased demand. “Once supply from mines starts to decline and people start to realize the impact that's going to have, I think it's going to be incredibly bullish for gold,” says Telfer. “If gold went to $2,500 an ounce tomorrow, Goldcorp's production wouldn't change for the next four years. It can't react to change.”

The gold industry as a whole is subject to the law of supply and demand, as is the gold coin market. For example, in 2009 the United States Mint depleted its inventory of the bullion version of the 1 oz. Gold American Eagle coin. Demand was so great that the Mint couldn't make the proof version of the coin.

The 1 oz. Gold American Eagle coin has sold out before and this inventory could sell out. With the supply of gold in such unstable, unknown territory, today could be an opportune moment to start expanding your precious metals portfolio. Take the first step by buying the Gold American Eagle coin. Call 1-844-307-1589 to order one of the world's most popular gold bullion coins!

“There's really no way of knowing how high gold could go”

Gone are the days of the California gold rush, when ambitious explorers were able to secure their family's future by scouring riverbeds for exposed chunks of gold. New gold deposits are becoming increasingly more difficult and expensive to find and extract. On top of that, the number of years between discovery of a gold deposit and production is increasing, with the average lead time for gold mines worldwide standing at close to 20 years, finds Business Insider.

Exploration is likely to continue as it always has, though at a much higher cost and perhaps on another planet. President Obama signed legislation in November 2015 permitting commercial mineral extraction on asteroids and the moon.

“Geologists believe asteroids are packed with iron ore, nickel and precious metals at much higher concentrations than those found on Earth, making up a market valued in the trillions of dollars,” writes Mining.com.

The writing on the wall is clear. “There's really no way of knowing how high gold could go,” reports Business Insider.

Gold's limited supply is one factor among many that could influence prices this year, which means now may be an opportune moment to buy gold. Gold coins can play an important role in protecting your wealth. Call 1-844-307-1589 to speak with a knowledgeable Account Executive and receive a free one-on-one consultation.