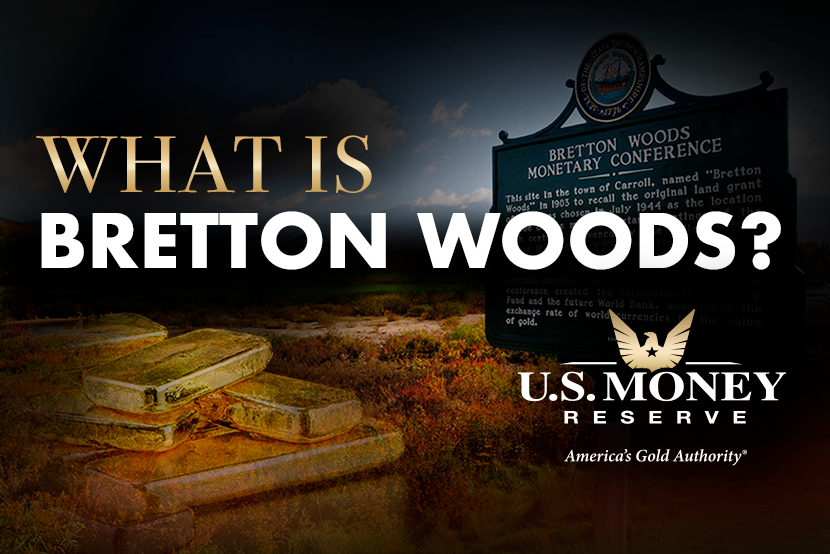 What Is Bretton Woods? We Recognize & Explain

The year 2019 marks the 75th anniversary of the Bretton Woods Conference, which created the World Bank and its sister institution, the International Monetary Fund (IMF). Learn how the Bretton Woods system affected gold—and what we can learn from it today.

In July 1944, shortly after D-Day, delegates from 44 nations gathered at the Mount Washington Hotel in Bretton Woods, New Hampshire, to establish a new international monetary system for the post–World War II era. Attendees relied on lessons from previous gold standards and experiences of the Great Depression to forge the postwar system.

“It was an unprecedented cooperative effort for nations that had been setting up barriers between their economies for more than a decade,” according to a Bretton Woods history published by the Federal Reserve System.

In coming together at Bretton Woods, the 730 delegates sought to do three things:

Out of Bretton Woods arose the IMF and the International Bank for Reconstruction and Development, now part of the World Bank Group. As explained by the Federal Reserve, the IMF was designed to monitor exchange rates and lend reserve currencies to nations with balance-of-payments deficits, while the World Bank was tasked with providing financial aid for postwar reconstruction and economic initiatives in less-developed countries.

The Bretton Woods system fixed the U.S. dollar to gold at an exchange rate of $35 per ounce, while all other currencies had fixed but adjustable exchange rates pegged to the dollar, the World Gold Council says. The system became fully operational in 1958.

A Rocky Period for Bretton Woods

During the era of the Bretton Woods system, the world economy grew rapidly, remained pretty stable, and encountered only minor recessions, according to the World Gold Council.

However, the 1960s brought signs of stress, as balance-of-payments deficits caused foreign-held dollars to exceed the U.S. gold stock. This implied that the U.S. couldn’t meet its obligation to redeem dollars for gold at the official price, the Federal Reserve says.

A chronic U.S. trade deficit drained U.S. gold reserves, but there was a backlash about the notion of devaluing the dollar against gold, the World Gold Council says. For one thing, this would have required nations with surpluses to bump up their exchange rates against the dollar.

In 1961, the London Gold Pool was formed. Eight nations combined their gold reserves to bolster the $35-per-ounce mark for the price of gold versus the dollar, according to the World Gold Council.

The Collapse of Bretton Woods

That same year, London’s gold market shut down for two weeks after a sudden spike in demand for gold. As a result, according to Reuters, the nations in the Gold Pool declared they would stop buying and selling gold on the private market.

As noted by the World Gold Council, the two-tier system was “inherently fragile.” Meanwhile, the U.S. deficit was worsening, and this complicated matters.

“With speculation against the dollar intensifying, other central banks became increasingly reluctant to accept dollars in settlement; the situation became untenable,” the Council says.

The IMF places blame for increasing overvaluation of the U.S. dollar on enormous increases in domestic spending for President Lyndon B. Johnson’s Great Society programs and military spending related to the Vietnam War.

According to the IMF, the Bretton Woods system unraveled between 1968 and 1973.

Amid that collapse, in 1971, President Richard Nixon proclaimed the U.S. would “temporarily” halt on-demand convertibility of the dollar into gold for the central banks of other nations; this move meant the beginning of the end of Bretton Woods and led to gold being traded freely on world markets. A subsequent effort to resuscitate fixed exchange rates fell apart.

By early 1973, major currencies started floating against each other and against the U.S. dollar, sealing the demise of the Bretton Woods system, according to the IMF and the Office of the Historian at the U.S. Department of State.

“The Bretton Woods international fixed-exchange rate system was short-lived, lasting only 15 years from its effective start in 1958 to its abandonment in 1973. But it took much longer for the world’s major monetary authorities to complete the transition to today’s system of mainly floating exchange rates and inflation targeting,” American Express says.

After the Downfall of Bretton Woods

The IMF says that since the implosion of the Bretton Woods system, its members have been able to pick any form of currency exchange, except for aligning their currency with gold. The options for IMF nations are:

“While countries can no longer tie all their currency conversion needs to the U.S. dollar, nor link that dollar to a fixed amount of gold, the legacy of Bretton Woods continues in the form of the IMF and World Bank,” according to the business school at Northeastern University. “The IMF still exists as a holder of reserve currencies, and the World Bank remains as a lender of funds to developing and growing economies, following the end of its role funding the postwar reconstruction of Europe.”

Bretton Woods and the Price of Gold

As for gold, the prices of it and other precious metals have soared since the demise of the gold exchange standard in the 1970s, according to a 2016 commentary published by KITCO.

Decades later, U.S. currency continues to no longer be backed by gold.

In 1974, a year after the Bretton Woods system evaporated, President Gerald Ford repealed the federal prohibition on public ownership of gold and public involvement in gold transactions, according to the Federal Reserve Bank of Richmond. Ford’s signing of Public Law 93-373 wiped out actions taken in 1933 and 1934 by President Franklin D. Roosevelt that required people to turn in their gold coins and bullion in exchange for paper dollars. With his signature, Ford returned gold to its pre-1933 status, thereby opening the floodgates for the buying and selling of the precious metal.

Fittingly, Ford’s portrait appears on the front of a $1 gold-colored presidential coin issued by the U.S. Mint in 2016.

Tradition says diamonds are an appropriate gift for a 75th anniversary. But we think gold is more appropriate this year, in honor of the spirit of Bretton Woods. Buy gold online or call 1-844-307-1589 today.