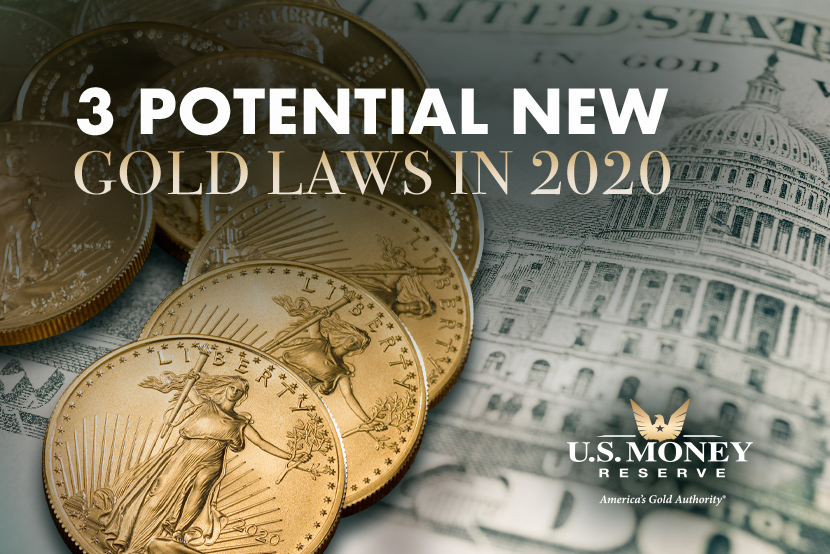 Gold-Friendly Legislation to Watch in 2020

You heard the Schoolhouse Rock! song in grade school. Now it’s time to revisit the jingle with a look at gold legislation that could someday become law. From a push to get back on the gold standard to a desire for increased insight into the Federal Reserve’s gold holdings, pending legislation spans the gamut of gold topics. Being aware of and understanding these potential new gold laws could help you know when it’s the right time for you to buy gold. Here are three pieces of legislation that you should consider following.

In response to a weakening dollar, bill H.R. 2558 suggests that the Secretary of Treasury define the dollar in terms of a fixed weight of gold, based on the price of gold at the end of the market day. It also proposes making Federal Reserve notes exchangeable with gold.

In doing so, the bill aims to stabilize the dollar, put control of the money supply in the hands of the market (not the government), help the economy grow, and most importantly—restore American middle-class prosperity.

Government transparency is a hot topic. It has been for a long time. The United States is said to have tons of gold locked away in Fort Knox, but very few people have seen the gold or know exactly how much gold is physically there.

Bill H.R. 2559 directs the Government Accountability Office to report gold reserves every five years. The report would require a full audit of all gold reserves and their location, provide an analysis of the reserves’ security, and announce any amount of gold that is minted and sealed in vaults.

This bill also demands a paper trail for all gold swapped, leased, or sold by the U.S. government over the past 15 years.

Why watch H.R. 2559? Allowing the public to see how gold is being used by the U.S. government may help instill trust in the system and bolster the validity of gold ownership nationwide.

The Queen of Soul, Aretha Franklin, might soon be posthumously presented with the Congressional Gold Medal in honor of her legacy. After her death in 2018, bill S. 409 was drafted to commemorate not only Aretha Franklin the singer, but also Franklin as a philanthropist and civil rights advocate.

In the 1960s, Aretha’s music served as a call to action that brought thousands of people into the civil rights movement. She also contributed heavily to human health causes and gender equality.

“Being the queen is not all about singing,” Franklin is known for saying. “It has much to do with your service to people. And your social contributions to your community and your civic contributions, as well.”

Aretha’s list of accolades is long and includes such honors as receiving the Presidential Medal of Freedom and the National Medals of Arts and Humanities awards and being the first woman inducted into the Rock and Roll Hall of Fame. Over the span of six decades, Aretha Franklin inspired generations of musicians and politicians alike.

Why watch S. 409? S. 409 reminds us of the power of American coinage to commemorate, honor, and perpetuate the legacy of our nation.