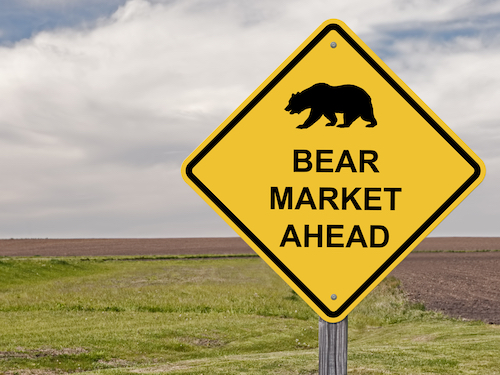 Is a Rolling Bear the Most Unnerving Spectacle on Wall Street?

A bear market is generally considered to be a period in which stock prices fall by 20 percent or more and features a self-sustaining sell-off. It’s often accompanied by widespread pessimism and losses across all of the broad market indexes—like the Dow, the S&P 500, and the Nasdaq.

But that’s not exactly what we’re experiencing at the moment. Equities have been wildly volatile, and the indexes have flip-flopped between sharp drops and modest climbs—invariably landing right back where they were in January.

Over the past few years, market losses have been sector-specific—as energy, healthcare, raw materials, and consumer staples have all gotten walloped. In the past few weeks, the technology sector has been under siege as Facebook, Amazon, and Netflix have traded in and out of bear market territory.

And while industries have taken turns grappling with losses, there has not been a uniform rout or an across-the-board retreat. Overall, the collective “market” has not fallen by more than 20 percent to justify a bear designation—at least not yet.

But something is afoot. It’s different, disconcerting, and in many respects a bit more insidious. We’re experiencing a “rolling bear market”—pockets of weakness that seem to rotate indiscriminately through equities. We don’t quite know which sector will tumble next or which industry will plummet in the near term. It’s a bobbing and weaving market cycle—a shareholder “rope-a-dope” of sorts where our attention is drawn to one part of our portfolio while the other part runs the risk of being evaporated.

For anyone holding a stock-based retirement account, it’s nothing short of a rolling correction.

Morgan Stanley’s chief equity strategist, Mike Wilson, identified the “rolling bear” back in September and attributed it to the “removal of central bank liquidity.” Last week he doubled down: “Growth, tech, and discretionary stocks were among the final holdouts from the rolling bear market. These stocks have now begun to underperform, and we think there is more ahead.”

With the advent of trade tensions, weak earnings, slowing global growth, a stumbling housing sector, and a wilting Chinese economy, the rolling bear could very well put down some roots. And rising interest rates could help it dig in.

Legendary analyst Edson Gould, who studied market cycles from the 1930s through the 1970s, came up with the “three steps and stumble” rule. It’s a tenet of market lore and a policy indicator that has reliably projected that equities will plummet after the Fed raises interest rates three times in a row. The “stumble” marks the arrival of a bear market and a serious setback for investors.

With the Fed vowing to make good on its plan to raise interest rates again this year—and several more times next year—this rule clearly demands our attention.

It’s time to play defense. With a rolling bear on the loose, a portfolio only holding equities and other paper assets could spell serious trouble. The current market climate is unfamiliar and unpredictable. Political uncertainty is rising, monetary policy is tightening, and the market’s biggest drivers are falling—sector by sector and industry by industry.

Morgan Stanley’s Mike Wilson concludes, “Rolling bear markets aren’t over until they touch every last corner, with the highest-quality areas eventually taken out to the woodshed.”

Depending on what you’re holding in your portfolio, you could very well get mauled.