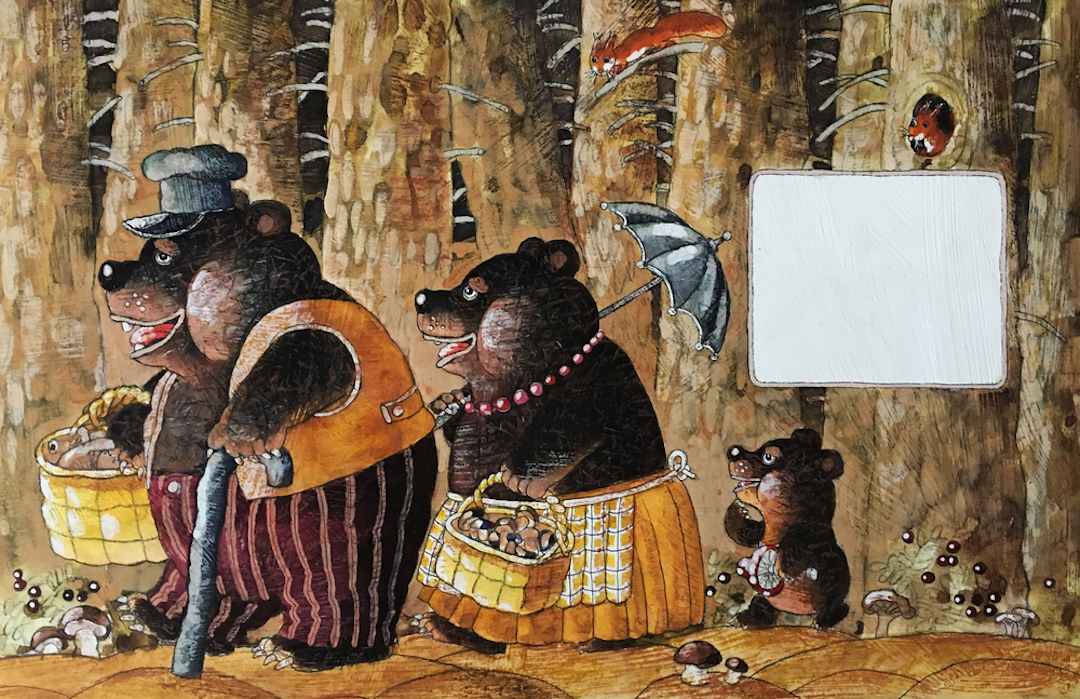 A Goldilocks Economy and the Real Story of the Three Bears

In the Goldilocks tale first published by Robert Southey in 1837, called “The Story of the Three Bears,” the Great, Huge Bear; Middle-sized Bear; and Little, Small, Wee Bear go off into the woods while their porridge is cooling. Shortly thereafter, an old woman comes upon their house:

“She could not have been a good, honest old Woman; for first she looked in at the window, and then she peeped in at the keyhole; and seeing nobody in the house, she lifted the latch.”

The woman does, in fact, try various bowls of porridge, the chairs, and the beds before jumping out the window and running back into the forest. In some versions of the tale, the bears chase her. In other versions, they drown her, and in still others, they impale her on the steeple on top of St. Paul’s Cathedral.

While the moral of the story involves respect for boundaries and personal property, it is also a commentary on things being in balance, i.e., not too hot or cold, too hard or soft, too high or low. These notions of parity and evenness are routinely applied to fiscal matters, and in a “Goldilocks Economy,” things are deemed “just right.”

Investopedia defines a Goldilocks Economy as one that is “not so hot that it causes inflation, and not so cold that it causes a recession.” It is often characterized by “a low unemployment rate, increasing asset prices, low interest rates, brisk but steady GDP growth, and low inflation.”

We’re currently thought to be in this type of idyllic place—job creation is up, the markets are on a historic run, home prices are soaring, Fed policy remains accommodative, GDP is rising, and inflation rates are holding steady.

But the belief that the economy can truly be “just right” is foolhardy. As a matter of fact, it can be downright dangerous. In early February 2007, The Wall Street Journal published a now-haunting opinion piece, “The Goldilocks Economy: Can it Last?” It reads, in part:

“This past week produced a string of good news for the U.S. economy. Gross domestic product, the most closely watched barometer of growth, expanded by a healthy 3.5% annual rate in the fourth quarter. Inflation worries eased, as the Federal Reserve's preferred inflation gauge rose at an annual rate of only 2.1% in the quarter. The central bank responded by leaving interest rates unchanged, helping to drive the stock market to record highs.”

Needless to say, it didn’t last. In the months that followed, a crippling housing crisis emerged, countless mortgage lenders went belly up, billions in hedge funds were liquidated, the foreclosure rate almost doubled, and the country slipped into one of the worst recessions in modern history.

In a world teeming with volatility and risk, there are few moments when things are truly “just right.” Unemployment can run too low, the markets can surge too high, bubbles can form, and unforeseen hazards can blindside the economy.

We must look beyond the fables and folk tales to the real-life cycles of booms and busts, feasts and famines, profits and losses, where Goldilocks is actually an old hag, the porridge is rarely perfect, beds are never right, bears are more likely to chase us, and history almost always repeats itself.

The only way to truly live happily ever after is quite simply to prepare for it. Understanding allegory is one way. Owning physical gold as a store of wealth is another.