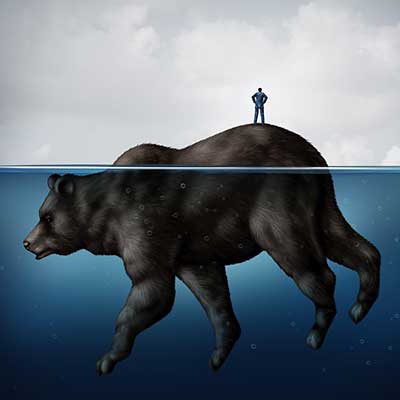 There is nothing to fear but the “fear index” itself

With North Korea playing chicken with missile tests, the Cold War on permafrost, and Tehran free of sanctions and flush with cash—one would expect a world of worry on Wall Street. Add insurmountable sovereign debt, stagnant GDP, a shrinking middle class, a massive federal balance sheet and exasperating hyper-partisanship—and portfolio protection seems like a practical course of action. And yet, the Volatility index (VIX) hovers at historic lows.

The VIX is a measure of market anxiety published by the Chicago Board Options Exchange. It essentially calculates anticipated fluctuations of the S&P 500 over the coming 12 months. The VIX, also known as “the fear index,” reflects both market sentiment and expectations. The index is reflected as a percentage of implied volatility. So, a lower reading suggests market stability while a higher one is often associated with pronounced variation and risk.

On Monday, the VIX fell below 9.7—its lowest level since 1993. The index, which has a long-term average of about 20, has been below 10 only three times since 1990, and in each case stocks were down a year later. In January of 2007, the VIX fell to 9.89. A little over a year later the Dow tumbled 416 points for its biggest one-day loss (at that time) in six years. What followed in the fall of that year occupies one of the darkest places in stock history.

The painful, bubble-fueled 17-month bear market of the financial crisis started in October of 2007 and lasted into March of 2009. It decimated both Main Street and Wall Street, upended the entire U.S. financial system and caused a panic that spread around the globe. When it was done Lehman Brothers and Bear Stearns were broke, and the S&P 500 had lost approximately 50% of its value.

So, what’s fueling the current Big Board calm? Yes, the U.S. stock market has been riding a string of all-time highs. The UK economy has proven remarkably resilient since “Brexit” and its impending divorce from the EU. Donald Trump’s surprising election victory has not been the tragedy that many feared and has instead led to a surge in business optimism, particularly in light of his tax reform agenda. And with the defeat of Wilders, Hofer and Le Pen—global populism seems to be in check. Let the good times roll, right? Not so fast.

The plummeting “fear index” is by no means a declaration that all is right with the world. Unfortunately for those that are chilling in the equities comfort zone, the VIX may not be a fair reflection of well-being or danger. While the Fed was busy lowering rates, printing money and propping up markets during the financial crisis, it was also artificially suppressing volatility. The unprecedented rounds of stimulus and injections of “federal feel-good” has effectively undermined the system of warnings and alerts that have helped to guide asset allocations for decades. So, while Wall Street is unnervingly tranquil, we are awash in a sea of economic risks and trapped in an unbalanced valuation bubble that can explode at a moment’s notice.

Remember, the VIX is not a comfort index; it is a fear gauge. When it’s extremely low, it may very well be extremely misleading. The real worry is complacency and being unprepared when the next crisis hits. The real danger is the lure of Goldilocks stocks that bait us into risk when we should actually be seeking safe haven.