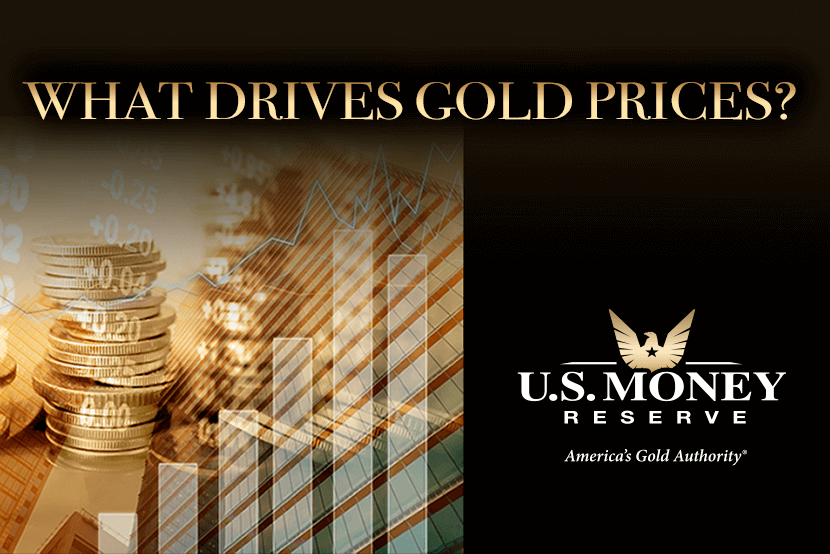 What Drives Gold Prices Over the Short Term and Long Term?

Do you watch gold prices like you immerse yourself in college football? If so, you’ve probably noticed that different things trigger gold prices to go up or down at different times, similar to what happens with gasoline prices.

As America's Gold Authority®, U.S. Money Reserve is uniquely positioned to speak to how gold prices work. Follow along as we explain how short-term and long-term drivers of gold prices differ and overlap, and how you can incorporate this knowledge into your precious metals portfolio strategy.

In the short term, the price of gold can shift for several reasons, all of them tied to what’s happening “in the moment.” Here are a few of them.

What the Federal Reserve does regarding interest rates correlates with the rise or fall of gold prices, and also the stock market.

A trade war with China. Stepped-up tensions with Iran. Tariffs on goods imported from Mexico.

Historically, the price of gold slumps before an election and rallies after. As we pointed out in an examination of the 2016 election and gold prices:

“In 2004, gold trended lower the first three weeks of October before rallying about ten days before the election; in 2008, gold prices decreased…during two weeks in late October and experienced a similar pre-election slump again in 2012.

Supply and demand affect everything from gasoline to airfare to housing. You can put gold into that category, as well.

If demand for gold suddenly spikes—propelled by an increase in interest rates, for example—the price normally spikes along with it. But if demand weakens, then the price usually declines.

In terms of gold supply, no one knows for sure how much gold is left in the earth. The U.S. Geological Survey estimates that there are about 57,000 tons left to be mined. That might sound like a lot but compare it to the amount of gold that’s already been extracted. What you’re left with is a cube that’s about six meters on each side—a cube that would stand nearly as tall as an adult giraffe.

Lack of confidence in the economy

A sudden lack of confidence—or bout of confusion—surrounding the economy can spur gold prices upward, too.

For example, gold prices spiked to their highest in more than five years on June 20, 2019 after the Federal Reserve hinted at possible interest rate cuts as early as July, notes CNBC. But, will they? Wall Street strategists are skeptical, as are analysts from Goldman Sachs and Bank of America, reports The Wall Street Journal. Then again, the CME Group puts a rate cut possibility at 85 percent, so who knows? In the meantime, people turn to gold (and gold prices turn up!).

According to the World Gold Council, there’s an “unequivocal link” to gold prices from wealth and economic expansion. Demand for gold historically has been correlated positively to economic growth.

Here’s one way of looking at this: As global incomes jump, so can demand for gold jewelry and technology that includes gold, like smartphones, tablets, and computers. Income growth also encourages savings, which helps spur demand for gold bullion coins and gold bars.

Macroeconomic variables, such as interest rates, might increase or decrease the relative cost of holding gold. This greatly affects opportunity cost, which translates into the benefits that might slip away when someone picks one alternative, such as cash, over another alternative, like gold. (The cash vs. gold debate is almost as old as time. Read more about it in Cash vs. Gold: Which Asset Could Prove Better.)

Price momentum—what the present and future look like for gold prices—can enhance or depress the direction of gold’s long-term performance, according to the World Gold Council. Downward momentum, resulting in lower prices, might translate into an excellent time to buy gold as part of a long-term strategy.

Overlap of Short-Term and Long-Term Drivers

What drivers do you see right now? Our Account Executives see them, too. Call U.S. Money Reserve at 1-844-307-1589 for a one-on-one wealth consultation and conversation.