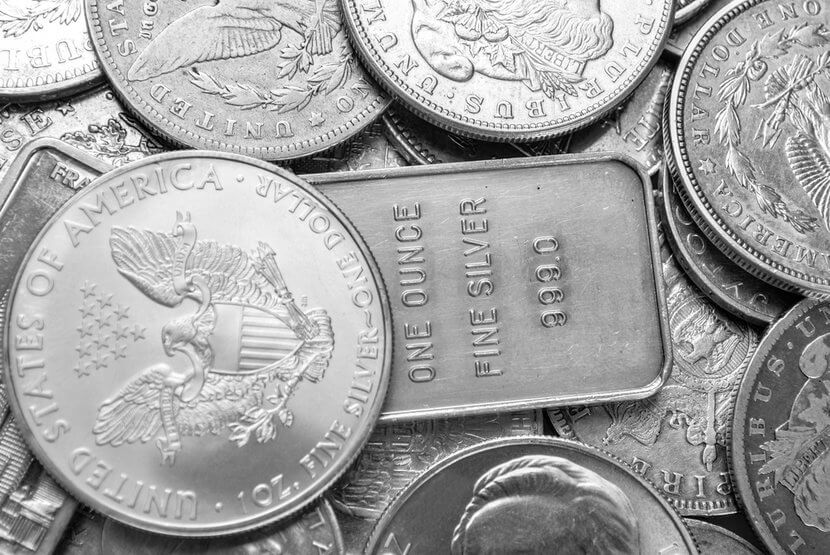 A Long-Term Outlook on the Price of Silver

In July, silver made impressive gains on the coattails of Brexit, jumping to more than $20 an ounce to its highest level in roughly two years. Towards the end of August, however, prices dropped towards roughly $18 an ounce, but have steadily rebounded throughout September.

While silver and gold have gained from the safe-haven rally following Brexit, ongoing threats of a domestic interest rate hike, and the unpredictable presidential race, some analysts argue that silver has further to run than gold, reports CNBC. Why could silver prices be on the rise in the near future and potentially into 2017? See what market analysts are observing and why now could be one of the best times to buy silver coins.

“Silver is a metal that most people don't really think about when they think about precious metals, but it does have this dual property towards both an industrial metal and a precious metal,” notes PureFunds CEO Andrew Chanin on CNBC.

Many of the reasons experienced wealth holders choose to buy gold are actually shared by silver, though silver has the added benefit of “having a lot of demand coming from industrials,” he adds.

One industry in particular is putting increased demand on silver: alternative energy. Jeremy Wrathall, mining team leader at Investec, told CNBC that “silver has (more room to run) because silver is increasingly used in solar panels now… Solar panels [are] a growing source of demand for silver.”

A feasibility study conducted by global research associates at Capital Gold Group projects the demand for silver utilized in solar panel manufacturing to “sky-rocket in the next five years, driven by sustainability initiatives of multinational corporations and governments worldwide.” Accordingly, the report projects that silver bullion prices are set to increase in the next five years alongside the demand for solar panels.

Solar Energy Industries Association (SEIA) forecasts the same increase in demand for alternative energy, with solar panel installations expected to more than double by the end of 2016 in the U.S. The industry is booming on an international scale as well, with India planning to ramp up solar power generation to 100 GW by 2020 with the help of the World Bank Group.

Though alternative energy drives a large portion of the industrial demand for silver, the precious metal is also increasingly used in smartphones, flat-screen TVs, alloys, solders, and a variety of other electronic devices. From an industrial perspective, the demand for silver isn't likely to wane as 1) developing countries expand their demand for electronic luxuries and 2) more nations look for ways to reduce pollution.

The mined supply of silver is down 9.2 percent this year and is estimated to drop again next year, to 13 percent less than what was mined in 2015, reports Societe Generale via Bloomberg. In its “Silver Yearbook 2016,” New York-based CPM Group seconded this sentiment, noting that silver mines are set to experience the first annual decline since 2011, also noted by Bloomberg. 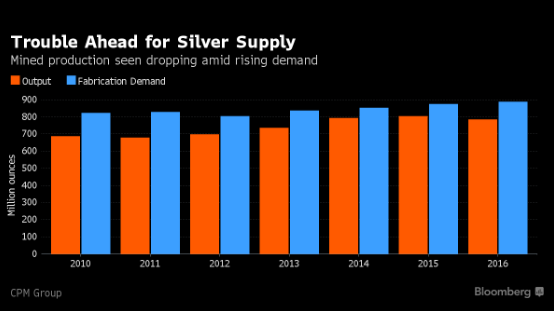 “There's a constrain in silver supply that has led to the rally in price,” says Hitesh Jain, head of alternative research at IIFL Wealth Management. While silver mining companies are pushing hard to open up new avenues, progress is slow and legislative hurdles are wide.

Vancouver-based Pan American Silver Corporation, for one, is struggling for approval to start mining one of the world's largest silver deposits in Argentina. In order to do so, Argentina's new federal government will have to convince local authorities in the mining area to repeal a blanket ban on open pits. Pan American's Chairman Ross Beaty feels hopeful, though, and he's looking to boost production in a bid to tap a long-term silver bull run that he says will withstand monetary policy “noise,” he told Bloomberg Markets.

With industrial consumption of silver expected to grow and silver production expected to decrease, 2017 could mean major gains for the price of silver. 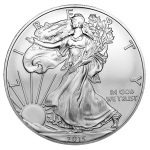 Silver coins remain one of the most accessible, cost-effective ways to enter into precious metals ownership. The 1 oz. Silver American Eagle, in particular, is the ideal choice for any discerning wealth holder looking to add an affordable precious metal to their portfolio. Call 1-844-307-1589 to learn more and secure your purchase today.

Banks revisiting their silver forecasts across the board

In July, Swiss bank UBS upgraded their silver forecast by more than 4% to an average silver price of $16.80 an ounce, reports Kitco, a forecast that stands just a few dollars shy of silver's current standing. For 2017, their precious metals strategist expects silver to average $18.30 an an ounce. HSBC followed suit shortly after, upping their full-year average forecast to $18 an ounce and their 2017 average forecast to $19.25.

“We believe silver prices may remain well bid…into 2017,” said HSBC via Kitco, and “we base this on solid fundamentals, as mine supply is likely to contract while industrial and jewelry demand should increase. Tighter supply is a key factor in our mildly bullish outlook for silver.”

As of September 19, the price of silver was $19.12 an ounce, only 13 cents shy of HSBC's 2017 forecast. Given that silver is already up 35 percent this year, as noted by Bloomberg Markets, the white metal could soon surpass the forecasts of UBS and HSBC, just as it did earlier in the year.

While domestic economic conditions could begin to stabilize in the U.S. towards the end of 2016, conditions around the world remain strained. As such, the price of this shimmering, post-Brexit haven may continue to surpass the forecasts of major banks in 2017, especially given the diminishing supply of silver. Silver coins remain one of the most affordable ways to diversify a wealth portfolio of any size, but could there be a point when they aren't?

For many precious metals buyers, high-performance certified silver coins are an essential part of their portfolio's protection and growth. These coins, in particular, are prime for long-term profit potential, as certified silver coins offer insulation from spot price volatility. Call 1-844-307-1589 to speak to an Account Executive and learn more. Whether you have questions about the price of silver or the type of silver that may best suit your financial goals, you'll find that U.S. Money Reserve's Account Executives are experienced, knowledgeable, and ready to answer your call.