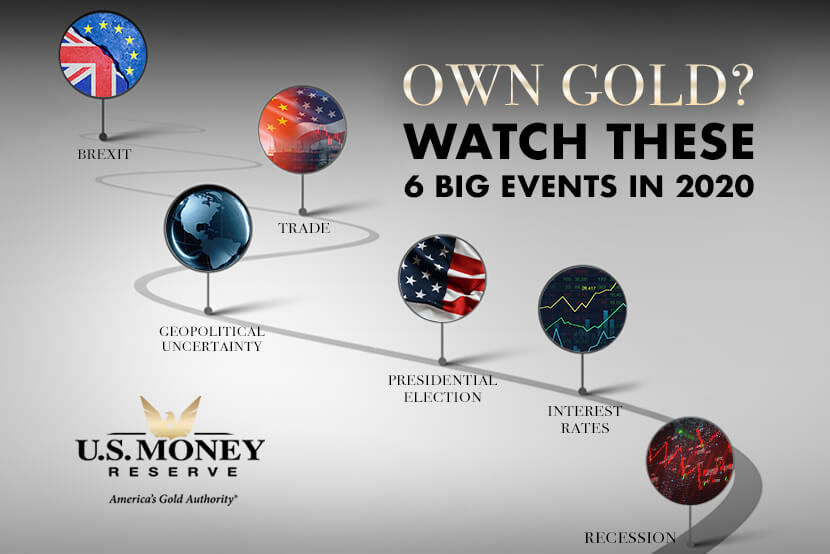 If You Own Gold, Pay Attention to These 6 Major Events in 2020

To help plan for your long-term financial well-being, you need to know what’s ahead, economically, politically, and otherwise. Some market analysts believe the U.S. is in for a recession. Others dismiss that belief as nonsense. Still others predict 2020 will be the most volatile year in history, with or without a recession.

What major political and economic events could have the most significant impact on gold prices in 2020 and likewise, your precious metals portfolio? Here, we dissect six of the scenarios.

In November 2020, U.S. voters will go to the polls to pick a president. The choice boils down to the incumbent president, Donald Trump, or the Democratic nominee.

Before and after the presidential election, the price of gold could experience ups and downs. Changes in the price of gold could depend, for instance, on new economic proposals issued by the candidates or on the outcome of the election itself. These developments could send gold prices upward or downward, based on how the events are perceived in the broader market.

When discussing gold prices during the 2016 presidential election, we pointed out that historically, the price of gold slumps before an election and rallies after. Election 2020 could fall in line with that historical precedent.

It looks like 2020 will be the year that the United Kingdom’s “Brexit” from the European Union finally happens. As of January 23, 2020, the Brexit bill completed its passage through the House Commons and the House of Lords and received royal sign-off. The U.K. will finalize its E.U. divorce on January 31. Barring unforeseen circumstances, the U.K.’s ties to the E.U. will be severed three-and-a-half years after U.K. voters approved a Brexit referendum.

Throughout this year, the U.K. and the E.U. will grapple with changes brought about by Brexit. For instance, a post-Brexit trade deal must be worked out.

How will Brexit impact gold prices? A delay in Brexit or disagreements over the post-Brexit structure could set off a hike in gold prices. But if everything goes smoothly with Brexit, gold prices could stay steady.

The truce between the U.S. and China—in the form of a “phase one” trade agreement signed in January 2020—promises to substantially de-escalate the trade war between the two global economic powers.

However, trade volatility could return if the U.S.-China deal falls apart. If that were to happen, jitters in the market as a whole could spur a rise in gold prices. However, a more favorable U.S.-China trade environment could mean flat or falling gold prices.

U.S. tensions with Iran and Iraq have been on the rise recently, and there’s no telling when those tensions could flare up even more. Thousands of miles away, the unpredictability of future unrest in Hong Kong lingers. Then, of course, unpredictable global conflicts always loom, such as the nuclear threat still posed by North Korea.

When this sort of high-stakes global uncertainty hangs over the U.S. and the world, it can lead to a jump in gold prices. By the same token, relative calm can contribute to relatively stable gold prices.

Predictions of a recession in 2020 have tapered off in recent months, but what if a recession were to hit this year?

If we enter a recessionary period, demand for gold could likely intensify, spurring higher gold prices. During the 2007 to 2009 recession, the price of gold soared 24 percent amid a drop-off in the broader market. During that time, many asset holders turned to gold as a safe haven. If history repeats itself, a recession could very well prompt another rush to gold.

From market insight videos to free eBooks, we do our best at U.S. Money Reserve to keep you in the know about everything that’s happening in the world and explain how it impacts your world. Take note of these major events and turn to U.S. Money Reserve for the latest updates on changes in gold prices.