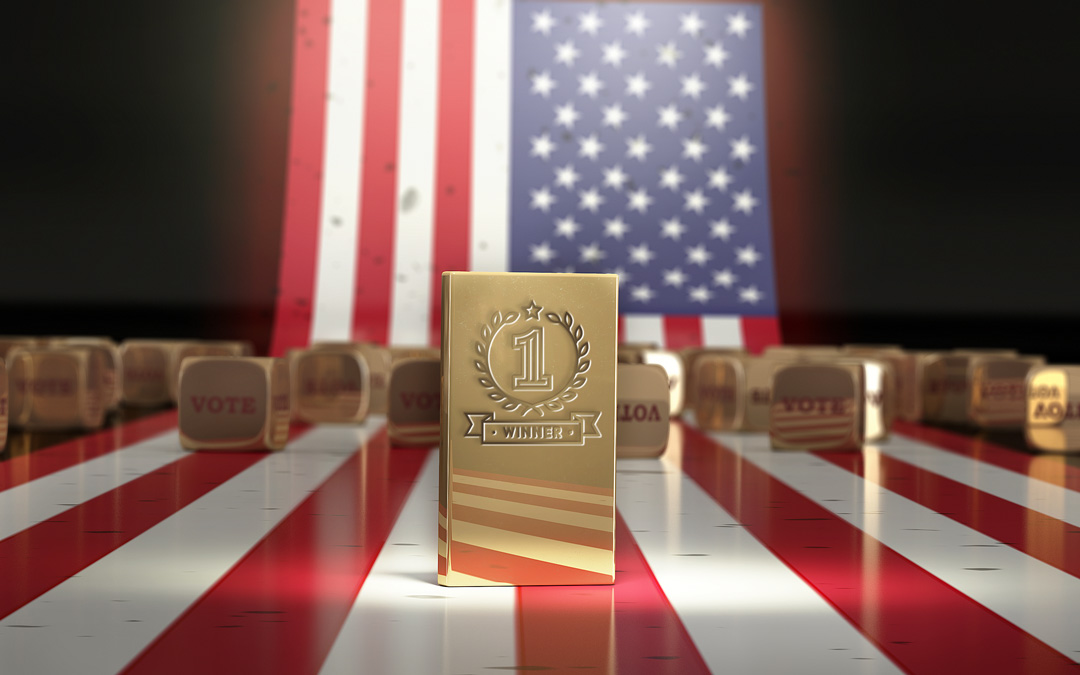 One week from today, we should know which direction the country has chosen for the next four years. Until then, our clients have been clamoring for physical gold like never before. Whether they are looking into rolling over an IRA, transferring a 401(k), moving out of cryptocurrency, or just adding to an existing diversified position with even more gold, silver, or platinum, the message is clear:

No matter the outcome of the 2020 presidential election, the next four years will be filled with significant changes, challenges, and concerns.

If you are a regular reader of this newsletter, you know that I stay far afield from fear-mongering headlines, scare tactics, and partisan politics. That said, the gold market can be largely affected by factors related to political uncertainty and economic instability. As a company, we regularly follow the latest news, established economists, reputable financial analysts, and various industry reports to be informed at every level possible.

But the hundreds of clients we speak to each and every day help us keep our finger on the pulse of consumers and their concerns about their financial future.

As always, many important issues drive a person to select a particular candidate. With that in mind, I want to focus on what we have been hearing from many of you: your thoughts on the election’s possible outcome, specifically as it relates to future economic policy and how that could impact the portfolios and retirement plans you have all worked so hard to build.

There is a sharp difference in viewpoint and policy between the two candidates. As the public awaits the results of Election Day, millions of Americans have begun to prepare their portfolios for either outcome. We at U.S. Money Reserve, along with many analysts, and—based on the call volume of our clients—even more of you believe that in either scenario, now is the time for “wealth protection.”

Why gold can win if Joe Biden wins the presidential election

According to many analysts, if Joe Biden wins the office of the presidency, there could be a major economic disruption. They reason that his economic and environmental policies could result in a significant loss of income for Americans across the nation.

Why gold can win if Donald Trump wins the presidential election

On September 11, 2019, President Trump tweeted, “The Federal Reserve should get our interest rates down to ZERO, or less.” He reiterated these arguments on May 12, 2020, when he tweeted, “As long as other countries are receiving the benefits of Negative Rates, the USA should also accept the “GIFT.” Big numbers!” A policy of prolonged low interest rates can be harmful for the power of the dollar versus other currencies and thus help bolster the importance of owning physical gold.

It is also worth noting that the price of gold steadily rose during Trump’s first term. This rise even preceded the recent economic crisis. For example, gold’s price was $1,210 per ounce near the beginning of Trump’s term and was in the $1,500-per-ounce range before the coronavirus outbreak.

Some factors that benefit gold are true for either candidate.

Regardless of who hold the keys to the Oval Office, there are some realities we must face.

There has never been a clear trend on what happens to gold prices directly after an election. That being said, Citigroup recently suggested gold could hit a new record high. “Uncertainty over the contest and delays about the outcome may ‘be under-appreciated by precious metals markets,’” analysts, including Aakash Doshi, said in a quarterly commodities outlook. The bank’s forecast implies a surge of more than $200 per ounce for bullion by the year’s end.

Regardless of who wins the White House, one thing is clear for all Americans: The future is filled with considerable unknowns. Given the ongoing economic and political uncertainty, it’s critical to protect your wealth and act now to safeguard your future in the event of any outcome. Many of our clients are turning to a method of wealth protection that has been trusted for decades: gold. Are you?