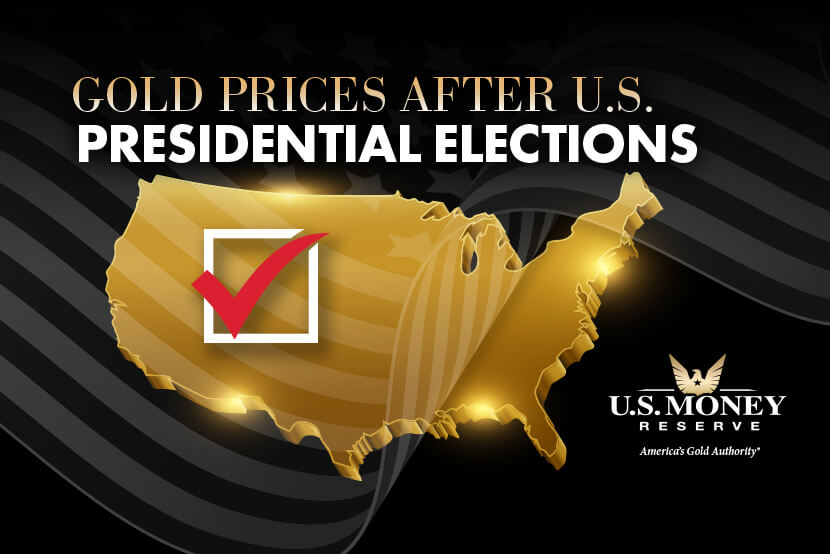 A Historical Look at Gold Prices After U.S. Presidential Elections

The 2020 presidential election has been a tumultuous one. With gold prices hovering between $1,900/oz. and $1,930/oz. in October, could prices go up once the election is decided in November? We examine elections dating back to the 1980s to see what we can learn about post-election gold prices.

Just as U.S. presidential campaigns can go up and down, so too can gold prices fluctuate after presidential elections.

In the first year of Barack Obama’s first term, gold surged to record highs, according to MoneyWeek. However, gold then experienced four years of market stress.

Under George W. Bush, gold enjoyed eight years of a bull market, rising from below $300/oz. to more than $900/oz., according to MoneyWeek. Yet after Bush won a second term, gold saw a brief blip, retreating 10%.

Gold also retreated after Bill Clinton was elected to his first term. But in his first year in the White House, gold bounced back, MoneyWeek notes. His second term, though, produced all-time lows of around $250/oz.

In his only term, Clinton’s predecessor, George H. W. Bush, watched the price of gold go down, according to MoneyWeek. Before that, gold jumped during Ronald Reagan’s second term, although it sagged right after he was elected. But in Reagan’s first term, gold headed into a valley, plunging from more than $600/oz. to less than $300/oz., MoneyWeek reports.

According to TV station KOMO, gold prices usually increase in September ahead of a presidential election and decline in the days before Americans head to the polls in November. On average, gold prices continue to taper until the following January.

Here’s a different look at the performance of gold after three previous elections:

So what’s the upshot of all this?

“A close look at historical gold price movements in the aftermath of previous U.S. presidential elections suggests little evidence of a clear relationship between the gold price and the election outcome based on party affiliation,” according to data, analytics, and technology provider Refinitiv.

Refinitiv goes on to explain that gold “seems to have recorded better and worse years under the leadership of both parties—and even exhibited contrasting performance under the same administration during two successive terms.”

The company concludes that underlying macroeconomic conditions play a greater role in the movement of gold prices than do pure politics.

Refinitiv believes that the near-term outlook for gold after the 2020 presidential election indicates near-term price volatility no matter the outcome. However, Refinitiv also predicts that gold prices will set a new high before year’s end. In the midterm to long term, the environment for gold remains “highly favorable,” the company reports, as either Donald Trump or Joe Biden will be dealing with economic instability, low interest rates, and continuing tension between the U.S. and China.

According to Kitco News, some experts envision that gold’s price forecast could be further impacted by which party ends up controlling Congress and whether the presidential election results are contested.

Investment bank JPMorgan Chase & Co. foresees a 2 to 5% spike in gold prices if Biden and fellow Democrats lead a “blue wave,” Financial News reported. But if Biden wins and the Republicans retain the Senate, JPMorgan analysts predict a 2% rise in gold prices. Meanwhile, a Trump win could knock 5% off gold prices in the short term, but a contested outcome could boost gold prices by 2 to 5%.