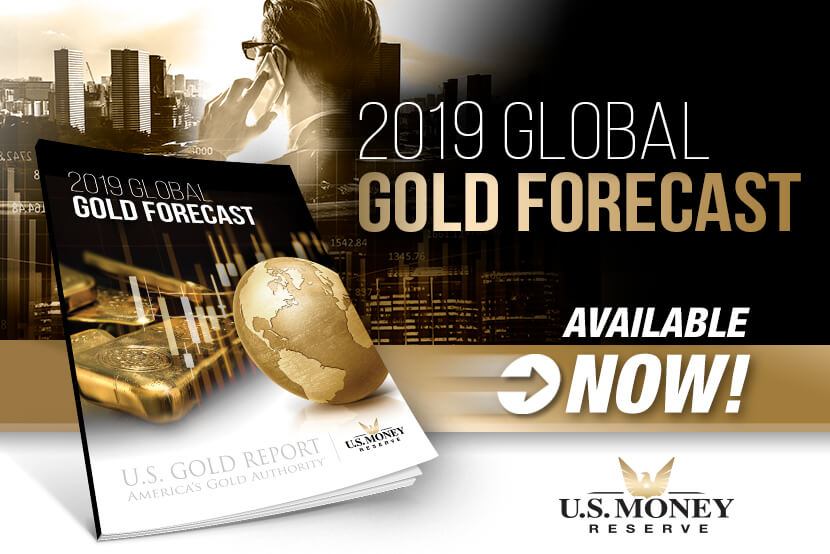 The economic outlook for 2019 is filled with warnings of a downturn, with many prominent economists and experts predicting a U.S. recession could start in late 2019 or early 2020.

Of particular note are the following three predictions. They’re poised to burden the U.S. economy but be a boon for gold.

Trade tensions, higher interest rates, and mounting consumer debt are just three of eight factors that could weigh down the U.S. economic expansion and boost gold in 2019, whether that takes the form of a recession or another type of economic downturn. Follow along to learn more about just some of the insights featured in the 2019 Global Gold Forecast. You’ll want to download U.S. Money Reserve’s full special report for an in-depth analysis of all eight of the looming threats to the U.S. and global economies.

A glimmer of hope emerged in January 2019 in the ongoing trade battle between the U.S. and China, two of the world’s economic heavyweights—the nations launched negotiations aimed at resolving the stalemate. Yet observers wonder whether China will adhere to its end of the bargain if the U.S. and China do declare a trade truce.

The main global concern hovering over the U.S. economy stems from trade friction with China. In fact, while China’s economic slowdown could swing the other way in early 2019, the U.S. could see weaker economic growth as the boost from federal tax cuts fades, according to CNBC.

Loretta Mester, president of the Federal Reserve Bank of Cleveland, told the Wall Street Journal that she expects U.S. economic growth to slide from 3% in 2018 to between 2% and 2.5% in 2019, with growth of 2% projected for 2020. More dire outlooks indicate U.S. economic growth could slip below 2% in the second half of 2019, CNBC reported.

Joining the chorus of economic observers who believe the U.S. will enter a recession by the end of 2019 are nearly half of the country’s CFOs, according to the Duke University/CFO Global Business Outlook. In 2019, CFOs anticipate below 3% growth for the U.S. economy, the survey shows.

“The end is near for the near-decade-long burst of global economic growth,” said John Graham, a finance professor at Duke’s Fuqua School of Business and director of the CFO survey. “The U.S. outlook has declined, and moreover the outlook is even worse in many other parts of the world, which will lead to softer demand for U.S. goods.”

China plays an enormous role in the demand for U.S. goods. In January 2019, economist Mark Zandi of Moody’s Analytics told CNBC that the U.S.-China trade war was starting to inflict “real economic damage.” One high-profile victim of the damage is Apple; CEO Tim Cook pinned much of the blame for the company’s projected revenue shortfall on weak iPhone sales in China and the U.S. trade skirmish with China.

What do trade tensions mean for gold?

If the political crisis between the U.S. and China deepens, it could push buyers out of risky assets and toward the safe-haven appeal of gold—one of the only long-standing stores of wealth in the world. A deceleration of global growth also could drive risk-averse buyers around the world toward gold.

>> Bottom line: The rocky U.S.-China relationship, including tit-for-tat trade tariffs, could wreak havoc on the U.S. economy in 2019. Download our exclusive global gold forecast to learn where your wealth may be safest.

Rising interest rates may position gold as your best store of wealth.

Economists and many other observers, including consumers, will be keeping a close eye on the Federal Reserve in 2019.

Ultimately, warned MarketWatch, the Fed will be the “ultimate arbiter” of how the U.S. economy proceeds in 2019. If the Fed “overreacts” and lifts interest rates too much, their action could spawn the first recession in a decade, MarketWatch warned.

In December 2018, Fed Chairman Jerome Powell said the Fed had detected “some softening” of the economy and signaled a “fairly high degree of uncertainty” about how the Fed would approach rate hikes in 2019, although Powell then changed his tone and indicated the Fed would be “patient” regarding further rate increases. Stay tuned.

While he’s forecasting just one rate increase in 2019, Raphael Bostic, president of the Federal Reserve Bank of Atlanta, acknowledged in January 2019 that “clouds” and “nervousness” hang over the economy in 2019.

What do interest rates mean for gold?

Managing Partners at Incrementum, Ronald-Peter Stoeferle and Mark J. Valek, summed it up nicely: “Rising interest rates could actually prove positive for gold. Market developments in recent years are testifying to the fact that this assessment is correct.”

>> With the rate-hike environment in limbo, dig into our exclusive special report to stay informed about how rising interest rates could jeopardize the U.S. economy but boost gold prices.

Student loan debt and other types of consumer debt are dragging down American consumers. They’re now saddled with more debt than in 2008, during the recession, meaning they could be less prepared to ride out an economic slump than they were during the twin disasters of the housing crisis and financial market collapse.

In 2019, consumer debt in the U.S.—including student loans, auto loans, and credit cards—is on track to exceed $4 trillion, according to the Wall Street Journal. To make matters worse, U.S. mortgage debt is edging closer to its early 2008 peak of $10.7 trillion.

Here’s what the bleak U.S. debt picture looks like from the standpoint of student loans, auto loans, and credit cards.

Student loan debt soared to a record of nearly $1.47 trillion in November 2018, up from $675 billion in June 2009 at the end of the recession, according to Bloomberg. College graduates who are 24 to 33 years old (part of the millennial generation) are finding it especially difficult to repay their student loans.

Auto loan debt climbed to $1.2 trillion as of September 30, 2018, with delinquencies of at least 90 days rising by 4%, reported Forbes. Especially worrisome is the increase of delinquencies among subprime borrowers.

“Recent dire warnings about practices in the subprime car loan industry have drawn comparisons to the 2008 mortgage crisis,” CityLab noted in December 2018.

“Credit card debt is the stain on millions of Americans’ finances that doesn’t scrub off easily, if ever,” said Kimberly Palmer, a credit card expert at personal finance website NerdWallet. “High interest rates combined with expenses that continue to outweigh income mean that some households are unable to fully rid themselves of debt and, in fact, continue to take on more.”

What does more consumer debt mean for gold?

As American consumers continue swimming in debt, gold remains a monetary standard and a reliable safe haven. This stability could be especially comforting as economic uncertainty prevails in 2019.

>> To learn more about what’s in store for the economy and gold in 2019, including troublesome consumer debt, download our exclusive special report.