4 Facts You Need to Know About the U.S.-China Trade War – USMR Market Insights 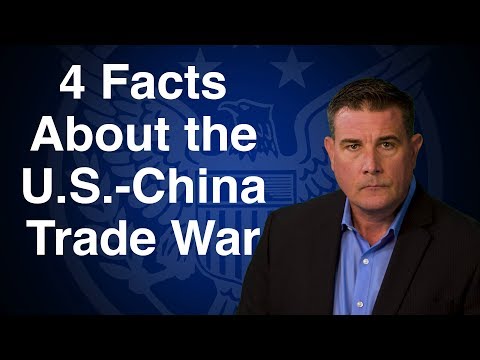 Sales Manager Coy Wells explains some missing details about the U.S. China trade war, and how these details will affect day to day life.

4 Facts You Need to Know About the U.S.-China Trade War – Video Transcription

Hello, my name is Coy Wells with U.S. Money Reserve's Market Insights. Today we're going to again talk about the trade wars taking place between United States and a big portion of our allies around the world, including China. One of the things that we talked about several months ago is that the trade war that initially started between the United States and China would eventually become a moot point. Right now, it's just the number one topic on the national television. The reason I say that it could become a moot point is a lot of people don't realize that China has an arsenal of weapons that they could actually use against the U.S. economy over the course of time in regards to trumping Trump's trade war. The number one issue that sits as a nuclear weapon that technically China could use against you use economy as U.S. treasury bonds.

A lot of people don't realize that several months ago, China started selling back U.S. Treasury bonds to the United States. China removed themselves as the largest holder of U.S. Treasury bonds in the entire world and the new leader is now Japan. If China continues to send back U.S. Treasury bonds, it will cripple the U.S. economy here in the United States. The second thing that China could do is they could start devaluing the Yuan. A lot of people remember that the Obama administration and the Trump administration accused China of currency manipulation. A lot of people don't realize that if China really wants to get under the skin of the United States in regards to the trade war, they only have to devalue their currency by about eight percent. That's not a big decrease in the value of the Yuan. If they decrease the value of the yuan by eight percent, the trade war, the trade deficit that Trump is wanting to impose on China becomes a moot point. The variable is none. It's zero.

Number three, right now, is that China has a huge influence on other countries. During the Obama administration and going into the Trump administration when they were accusing the Chinese currency of being devalued in the currency war taking place during that era, a lot of people don't realize at the same time China was trying to play a card or a place in the world economy and what they did is they devalued their currency, allowing foreign countries to dump the U.S. dollar, buying the Yuan and the Yuan and China being one of the largest traders and importers and exporters in the entire world. By doing that, China allowed foreign countries to buy the Yuan at half price, using U.S. dollars to do so, while the U.S. dollar was still at a very high point at that point in time, allowing these countries to buy the Yuan at half price. By doing that, China said, look, just buy our currency with U.S. dollars, you'll get more of them when we devalue our currency. All we gotta do is continue to keep doing what we're doing and we're going to have our yuan back up to where it is and about six months to a year, doubling the money that they made. And that's exactly what happened.

Fifty four nations around the world did that with China. That means they got out of U.S. dollars, they bought the Chinese Yuan, and all of a sudden the International Monetary Fund revoked their ruling on not a vote in as the world reserve currency and became a world reserve currency in October of 2017. With that happening, China became the sixth world currency be being involved with the SDR, the special drawing rights that are now being used around the world. Why this is important to understand is this: China has a huge influence on the world right now and they have because they are such a large economic footprint and so is the United States. The fourth thing that can happen is, is that China also has a large influence over companies and corporations because they are the largest importers and exporters. They can place additional pressure on these countries because they are now using the Chinese Yuan alongside with the U.S. dollar. These key factors are very important to understand is, as I mentioned months ago, that the trade war would become a moot point. It gives us the impression and illusion here in the United States that we are doing everything possible and we are.

The Trump administration is doing what it has to do to try to help improve the economy and the tariffs and trade that is taking place amongst other countries is what Donald Trump feels that the right thing to do and it is, but it has to be fair and balanced all the way across the board. Other countries have the right to be able to do the same thing that we're doing to them. At the end of the day, this is going to ultimately be a wash in the long term. The reason this is important to understand is that it is giving a boost to the U.S. economy and a confidence in the people inside the United States, which has now allowed the U.S. stock market to go on one of the longest bull runs ever seen in U.S. history. It has never happened before in history. That tells us that our money, as we've talked about in the past, is seeing in a market that is a point that has never gone this long. That means your money is sitting in an area that is literally at a tipping point.

As always, we continue to try to provide you with the best information available with U.S. Money Reserve and Market Insights, and we have new literature that is now going to be coming out: the U.S. Economy, House of Cards. This is a fantastic brochure. This will talk about some of the trade wars and the information that we talked about today. This literature will provide you with additional information in regards to the U.S. economy and how the things that we've talked about over the course of the past few months can impact and influence your finances longterm. As always, thank you for watching U.S. Money Reserve and Market Insights and as always click on the link below or call the phone number to get your free copy of the House of Cards.