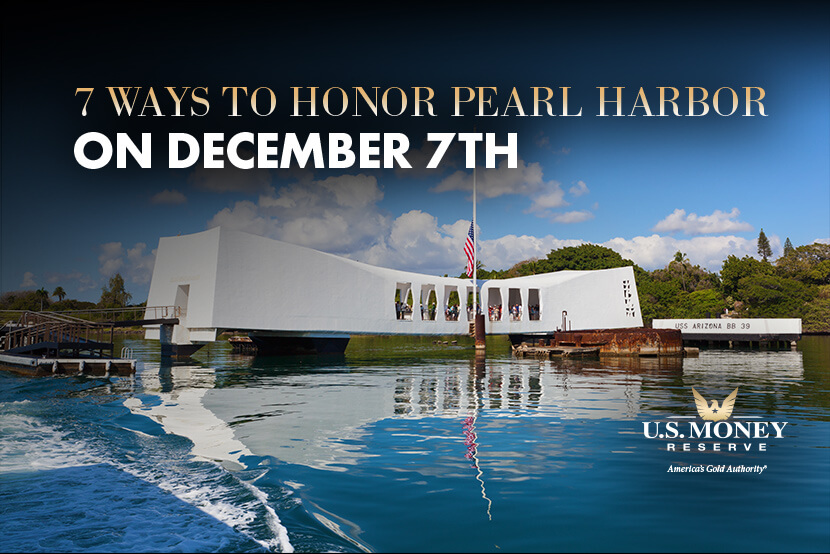 December 7 marks National Pearl Harbor Remembrance Day in the United States. This day helps us recognize our freedom and honor the brave individuals who lost their lives during the Japanese attack on Pearl Harbor on December 7, 1941.

This year’s ceremony will focus on Battlefield Oahu since the attack encompassed the entire island of Oahu with assaults on Army and Marine aviation bases as well as civilian facilities.

Want to contribute to this special day? Here are seven ways you can recognize our noble veterans and honor the memory of those who perished.

The American flag flies at half-staff until sundown on December 7, as poignant an honor as any afforded our country’s heroes. For flags displayed on homes—and therefore unable to be set at half-staff—a growing custom is to affix a black crepe streamer to the staff on which the flag hangs, just below the top.

“On a standard-size flag, the crepe should be no wider than one foot,” advises CBS Detroit.

It’s a streaming world now, with many households subscribing to a video service such as Netflix or Amazon Prime. Depending on the availability of such titles (since many movies come and go), consider watching a documentary such as Remember Pearl Harbor and History of Pearl Harbor: A Documentary. More of a bookworm? Consider the well-reviewed All the Gallant Men: An American Sailor’s Firsthand Account of Pearl Harbor. You can also watch this quick one-minute video from U.S. Money Reserve and share it with friends and family.

Each year that passes takes us further away from that fateful December 7, 1941. To ensure that future generations remember the courage and sacrifice on display that day, take time to educate the youth in your life. There are many online resources, including this one from PBS that features videos, discussion ideas, and more. You can also share videos (like the one-minute clip above) on social media.

Take a break from your typical social media posts to recognize the veterans and non-veterans alike whose lives were changed irrevocably at Pearl Harbor. You don’t need to be an influencer to add your voice to the chorus of Americans posting relevant photos, videos, or just a straightforward text-only “We remember.”

In previous years, the U.S. Defense Department and U.S. Navy have used social media for this very reason.

“Pearl Harbor was a significant event [more than] 70 years ago, but it still remains significant today. It can seem distant; we decided to use social media to connect and show how relevant it is,” explains Lt. Cmdr. Chris Servello, Navy director of emerging media.

Even better than a social media post is a phone call to someone who served in the military. It doesn’t have to be anyone directly connected to Pearl Harbor; personally thanking the veterans you know makes a great tribute to those lost at Pearl Harbor and throughout our nation’s military history.

Even though not all veterans have seen war, “A common bond they all share is an oath in which they expressed their willingness to die defending this nation,” writes Evelyn Murphy of the American Legion Auxiliary Unit #7. “We are their friends, their family, their co-workers, and their neighbors. It is up to us to ensure that every veteran feels that his or her service to this country is appreciated by their fellow Americans.”

Not sure where to start or how to find a veteran to thank? Consider participating in a creative service project like Wings of Gratitude. This initiative from U.S. Money Reserve was created to encourage families to give back to their communities by sending uplifting messages of appreciation to our nation’s military men and women.

6. Plan a Visit to the Pearl Harbor Memorial

Nothing can convey the scope of the attack on Pearl Harbor as effectively as a visit to the Pearl Harbor National Memorial in Hawaii. Have a trip already planned for the Aloha State? Add the Memorial to your itinerary. Passionate history buff? It’s worth the effort to visit one of our country’s most iconic landmarks. There you’ll see the Lone Sailor Statue—a two-piece bronze statue of a sailor and his sea bag. The base of the statue includes steel from the USS Arizona, one of the ships sunk on the “day that will live in infamy.”

Can’t make it in-person? Take a virtual reality tour and step back in time from the comfort of home. You’ll “walk the deck of the USS Arizona before it was sunk by an armor-piercing bomb,” see Pearl Harbor from the rooftop of the memorial, and so much more.

7. Observe a Moment of Silence

Pearl Harbor Remembrance Day activities don’t need to be elaborate. One remembrance can be as simple as a quiet minute or two. The attack on Pearl Harbor commenced at 7:55 a.m. local time. Whatever your time zone, take a moment to silently reflect upon the day’s events, what they meant to the people of Oahu, and how they changed the course of history.

The majesty of the artwork displayed on U.S. Money Reserve’s Pearl Harbor gold and silver coins helps put the fateful events of December 7 in your hand. That artwork, combined with the coins’ precious metal purity and the day’s historical events, has made them immensely popular—call 1-844-307-1589 to purchase yours over the phone today.