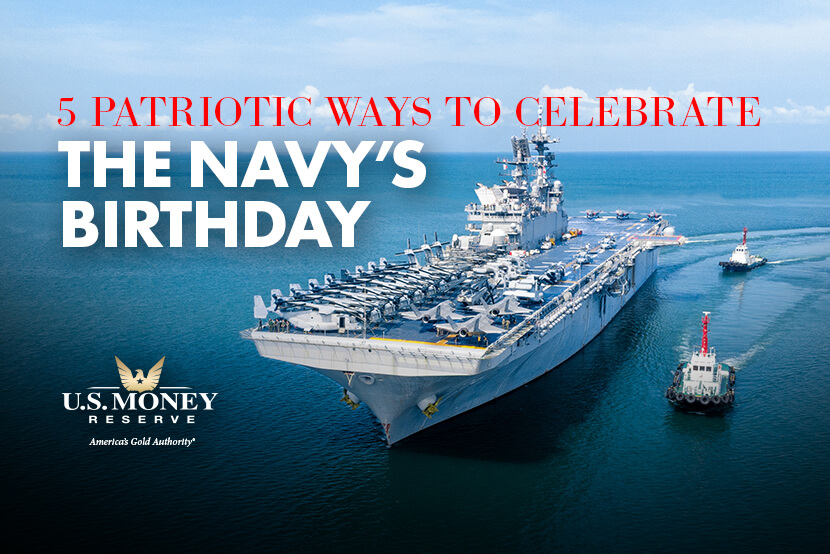 The U.S. Navy is a force to be reckoned with—and a force that we at U.S. Money Reserve believe deserves nationwide honor and recognition. If you haven’t heard about the Navy’s birthday, then it’s time to learn how you can celebrate the occasion alongside your fellow Americans and service members.

The Birth of the U.S. Navy

A resolution passed on October 13, 1775, by the Continental Congress established what is now the U.S. Navy with “a swift sailing vessel, to carry ten carriage guns, and a proportional number of swivels, with eighty men, be fitted, with all possible dispatch, for a cruise of three months….”

After the American Revolutionary War, the U.S. Constitution empowered the new Congress “to provide and maintain a navy.” Acting on this authority, Congress created the Department of the Navy on April 30, 1798.

In 1972, Admiral Elmo Zumwalt, chief of naval operations, authorized recognition of October 13 as the birthday of the U.S. Navy. Since then, each chief of naval operations has encouraged a Navy-wide celebration of this occasion “to enhance a greater appreciation of our Navy heritage and to provide a positive influence toward pride and professionalism in the naval service.”

October 13, 2020, marks the Navy’s 245th birthday. The theme of this year’s commemoration is “Victory at Sea,” highlighting the Navy’s efforts in the Pacific Theater during World War II.

How to Celebrate the Navy’s Birthday

Now that you’re equipped with the Navy’s history, how can you celebrate the Navy’s birthday? Here are five suggestions.

1. Consider a visit to a naval museum—in person or via a virtual tour.

Visit a naval museum to surround yourself with exhibits, relics, and in-depth stories related to the Navy and its accomplishments.

Similarly, if you want to fully immerse yourself in all things Navy, consider touring a naval ship. More than 160 decommissioned naval ships across the U.S. are open to public tours. These include aircraft carriers, battleships, submarines, and patrol boats.

Note that many museums and ships offer virtual tours and online experiences for enthusiasts who prefer to “visit” from home!

Your time, money, and support can have a big impact on Navy nonprofits. Consider learning more about a Navy-related charity that ties into your interests, family history, or local community.

If you’re not sure where to start, check out the U.S. Navy Memorial Foundation. Their mission is to honor, recognize, and celebrate the men and women of the Sea Services, past, present, and future, and to inform the public about their service. That mission directly supports October 13, 2020—the Navy’s birthday!

On the U.S. Navy’s 242nd birthday, the Lone Sailor Statue was raised at Pearl Harbor with support from U.S. Money Reserve.

“The Lone Sailor Statue is a patriotic symbol of appreciation to the brave men and women in the Sea Services who voluntarily risk their lives to protect freedom,” said Angela Roberts, CEO of U.S. Money Reserve, at the unveiling ceremony. “We feel honored to help solidify America’s appreciation into a beautifully sculpted statue.”

This year could be your chance to make history, too. What can you do to show your support for our nation’s Sea Service members?

You don’t have to leave home to expand your horizons. Gather loved ones and host a “historic” watch party of Navy-centric videos! Head to WorldWarIIFoundation.org and browse videos like, “The Navy Heroes of Normandy” that includes dozens of interviews with Navy D-Day veterans, or “D-Day: The Price of Freedom.” The film follows five D-Day veterans as they return to France decades after they landed on the beaches of Normandy. Each has his own unique story and takes you to the place where he fought, sharing all too vivid memories along the way.

Celebrate the Navy’s birthday by improving your overall knowledge and awareness of this Armed Forces branch. Select books from the Chief of Naval Operations Professional Reading Program for a taste of hand-picked literature that’s designed to help Sailors learn more about their “heritage and gain a better understanding of what it means to be a 21st century Sailor.”

5. Own unique coins that honor significant moments in military history.

Military-themed coins can act as present, physical reminders of the past. U.S. Money Reserve’s Pearl Harbor coins honor the 75th anniversary of the attack on Pearl Harbor and a portion of the proceeds went toward raising the Lone Sailor Statue in Honolulu, HI.

The Iwo Jima exclusive series, which debuted in 2020, honors the 75th anniversary of another important battle of World War II. The series includes two gold coins and two silver coins:

“This is a once-in-a-lifetime series. The Iwo Jima 75th Anniversary coins beautifully commemorate one of the most iconic moments of World War I—the raising of the American flag at Iwo Jima,” says John Rothans, Master Numismatist at U.S. Money Reserve.

Honor and celebrate the Navy’s birthday by purchasing one or more of the coins in our exclusive Iwo Jima coin series. Call or shop online today!