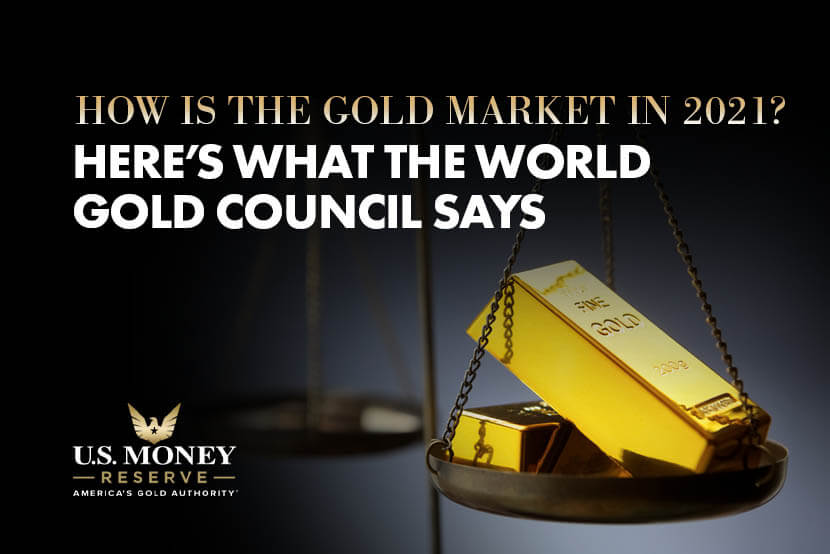 How Is the Gold Market in 2021? Here’s What the World Gold Council Says.

Last year was a wild ride for most people, and nothing seemed to go according to plan. Even so, the gold market was a safe haven for those looking for ways to weather the economic storm with confidence. Is 2021 shaping up similarly for the gold market? Or will it go in a different direction? We reviewed the World Gold Council’s most recent findings for more perspective.

What Is This Year’s Outlook for the Gold Market?

In a recent video, John Reade, chief market strategist of the World Gold Council, said he believes observers of the gold market are underestimating the uptick in consumer demand for the precious metal.

“I’m consistently surprised by how fast consumer demand is coming back in major markets, particularly in India and China,” Reade said.

The U.S. Mint certainly has witnessed a surge in demand for gold.

Reuters reported that sales of U.S. gold bullion coins from the Mint soared 258% in 2020 compared with the previous year. The increase stemmed from greater demand during the pandemic, along with manufacturing capacity issues.

The supply crunch at the Mint could continue throughout 2021. This year, the Mint has a “limited window” to produce gold coins, according to Reuters. The Mint is restricting the distribution of gold, silver, and platinum coins to certain dealers because of heavy demand and lean metal supply.

The Perth Mint in Australia also is experiencing a gold rush. The Mint reported a 285% spike in sales of gold coins and bars in March compared with the usual monthly average. In the first quarter of 2021, the Mint sold more than 330,000 troy ounces of gold, setting a quarterly record.

In an April blog post, Neil Vance, general manager of minted products at the Perth Mint, noted that “the market continues to take everything we can make at present,” citing above-average demand in the U.S. and Germany.

Reade’s guest on that World Gold Council video, George Cheveley, a portfolio manager at asset management company Ninety One, said he believes gold is fairly priced or even underpriced at this point. He suggested that gold stands to benefit from a sustained rise in inflation. Gold is seen as a hedge against inflation.

“Inflation is not going to go out of control, but it’s still going to remain high,” Cheveley said.

USA Today notes that gold’s performance stems from its status as a “real” asset. It’s virtually indestructible, unlike paper money, and it’s “physical and tangible,” unlike Bitcoin and other cryptocurrencies.

Both Cheveley and Reade dismissed the notion that Bitcoin is replacing gold as an asset or is causing weakness in the gold market. Gold wields advantages over Bitcoin, such as more diversification, more liquidity, and less volatility, they stressed.

Edmund Moy, former director of the U.S. Mint, says he owns both gold and Bitcoin—but for very different reasons.

“I own gold for insurance to offset the effects of inflation and as a safe haven to offset any steep losses in other parts of my portfolio. Bitcoin’s role in my portfolio is that of a speculative asset, rather than to protect wealth,” Moy wrote in a February opinion piece for MarketWatch.

Stay in the know when there’s a significant market move. The price of gold increased almost 19% in 2019 and 24% in 2020. We could be surprised by how it moves in 2021, 2022, and beyond. Sign up for U.S. Money Reserve Market Insider emails for weekly insights from our news team and CEO.