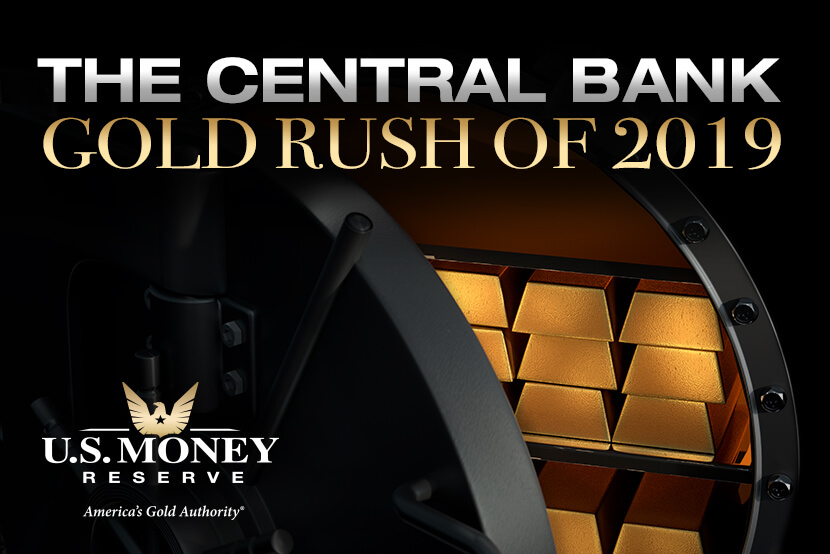 Here’s How Much Gold Central Banks Are Buying in 2019

Worried about global economic and political trends, central banks around the world are on a gold buying spree.

That’s a whopping 68% spike, “representing the strongest start to a year since 2013,” according to the Council.

“Diversification and a desire for safe, liquid assets were…the main drivers of the purchases,” notes the Council.

The first-quarter numbers for central banks follow on the heels of the upswing in gold purchases by central banks in all of 2018. Central banks helped lift overall gold demand in 2018 by 4 percent, explains the Council.

Central banks added 651.5 metric tons to their official gold reserves in 2018, up 74 percent from 2017 and the second highest yearly total on record.

“Net purchases jumped to their highest level since the end of U.S. dollar convertibility into gold in 1971, as a greater pool of central banks turned to gold as a diversifier,” according to the Council’s recap of 2018 gold-buying activity.

Which countries are buying the most gold?

Leading the way for gold purchases by central banks in 2018 was Russia’s central bank, which bought 274.3 metric tons to reduce reliance on the U.S. dollar. Other big buyers included Turkey, Kazakhstan, India, Iraq, Poland, and Hungary, according to CNBC.com, citing data from the World Gold Council.

China’s central bank is also scooping up gold. In April 2019, the central bank upped its gold reserves for the fourth consecutive month, according to Business Insider. The weaker U.S. dollar is driving Chinese demand, according to Stephen Innes, head of trading and market strategy at SPI Asset Management. 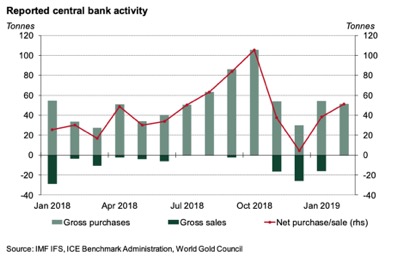 Why are central banks buying gold?

So, why do central banks buy gold in the first place? Here are three key reasons:

In 2018, the World Gold Council, in partnership with YouGov, surveyed 22 central banks to better understand how they manage their gold reserves. Of the central banks surveyed, 18 held gold. Seventy-six percent of central banks surveyed view gold’s role as a safe haven asset as highly relevant, while 59 percent cited its effectiveness as a portfolio diversifier. The survey data was released in September 2018.

Additionally, the survey showed that central banks turn to gold to improve risk-adjusted returns and use it as valuable collateral.

For now, banks have no plans to pull back.

Perhaps most importantly, the survey indicated that none of the central banks planned to reduce their exposure to gold over the following 12 months, and 18 percent planned to increase their holdings of bullion.

“Despite a decade passing since the global financial crisis, times seem no less certain. Central banks reacted to rising macroeconomic and geopolitical pressures by bolstering their gold reserves,” the World Gold Council noted in its 2018 report on gold demand.

What could central banks be preparing for that you might not know about? Call 1-844-307-1589 to learn more about how gold coins and bars can help you weather the unknown.