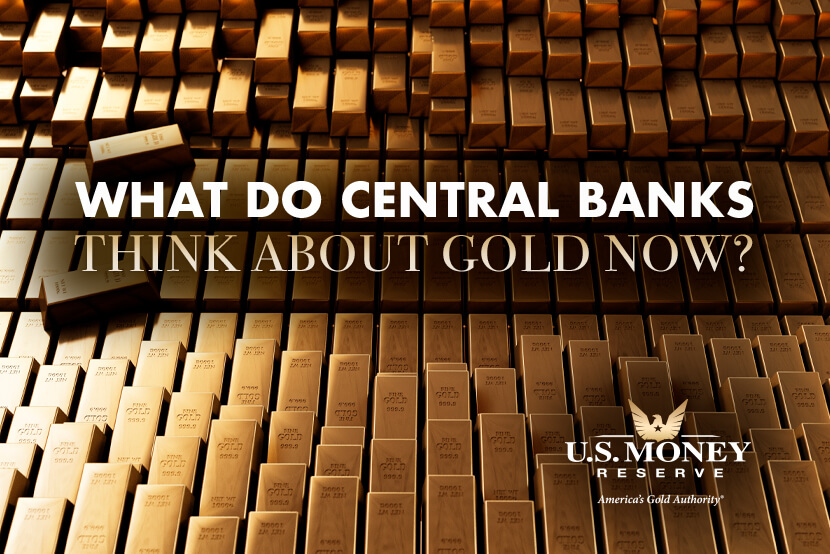 What Do Central Banks Think About Gold Right Now?

The number of central banks buying gold is expected to rise substantially in 2020. According to the 2020 Central Bank Gold Reserves (CBGR) survey, 20% of central banks anticipate increasing their gold reserves over the next 12 months, compared with just 8% of respondents in the 2019 survey.

Keep in mind that a central bank manages a country’s money supply and is responsible for promoting the stability of a nation’s financial and economic system. A central bank monitors the commercial banking system, prints the national currency, and wields the power to increase or decrease the amount of paper money that’s released into a country’s economy. With that level of power and involvement, a central bank’s actions can prove to be important economic indicators that everyone can learn from.

So what’s behind the uptick? We analyze the 2020 Central Bank Gold Reserves survey to find out.

Aside from negative interest rates, drivers of central bank purchases of gold include increased political risks and various geopolitical changes.

“These shifts may suggest a reevaluation of gold’s role amidst ongoing financial and economic uncertainty,” according to the survey, “while also reflecting long-term concerns about fiscal sustainability as government stimulus is deployed to cushion the global economy.”

What’s on the Horizon for Central Bank Purchases of Gold?

Three fourths, or 75%, of those surveyed foresee a rise in global gold holdings of central banks over the next 12 months. That’s up from 54% in the 2019 survey.

“Ultimately, the combination of recent market developments and persistent long-term trends has strengthened central banks’ interest in gold, pointing to continued purchases from the official sector,” the survey reports.

Arthur Hecht, the author of the Hecht Commodity Report, expects central banks to keep bulking up their gold reserves because:

What’s the Current Climate for Gold Purchases by Central Banks?

Purchasing activity by central banks has slowed as of May 2020. However, experts don’t envision central banks selling more gold than they’re buying, Kitco News reports, and they anticipate that buying will remain above historical levels. In the first quarter of 2020, central banks added 145 metric tons to their gold reserves, up 8% year-over-year and 34% quarter-over-quarter.

Which Countries’ Central Banks Are Leaders in Gold Purchases?

Turkey, Russia, China, Kazakhstan, and Uzbekistan are among the nations whose central banks have led the recent gold rush.

Many countries are “looking for a safe haven in these years in which interest rates have been very low and central banks have been printing large amounts of money to stimulate the global economy,” according to The Conversation, a news website. “Gold continues to have intrinsic [appeal], so it reassures countries—especially if they fear inflation and downturns.”

What Does Central Banks’ Gold Buying Mean for You?

Gold-buying activity by central banks signals potential reasons to consider putting gold in your portfolio. Chief among those reasons is that gold:

The volume of gold purchases by central banks has neared record levels. What might central banks be preparing for that you don’t know about? Call 1-844-307-1589 and check out our free resource library to learn more about how physical gold can help you weather the unknown.