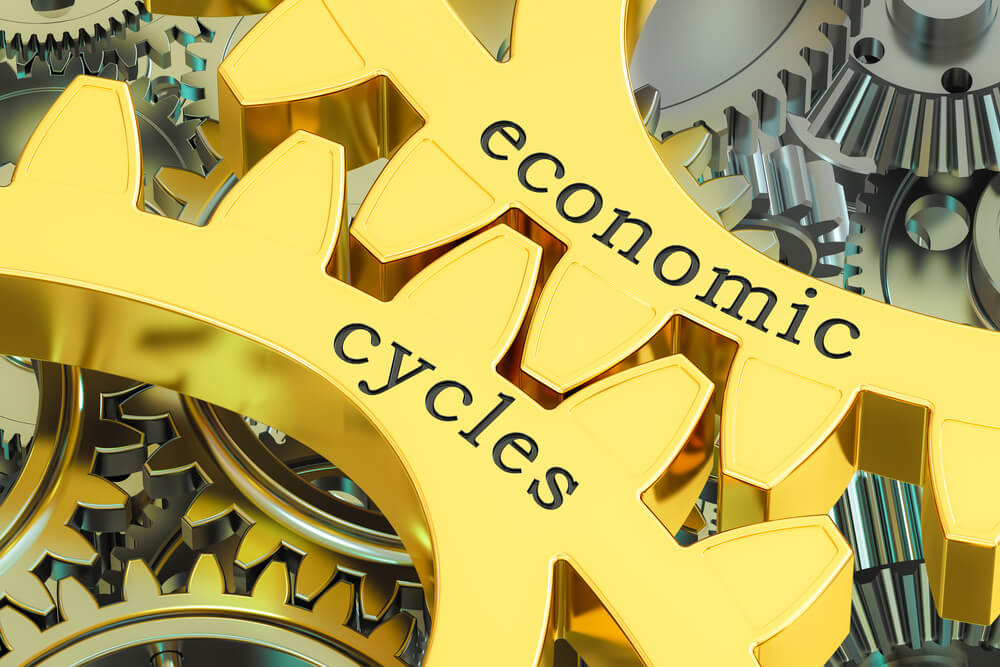 When it comes to downturns in the economy, is hindsight only 20/20—or can you protect your assets by adjusting your allocations based upon the economic cycle?

Wait—there’s an economic cycle? There is, indeed, and the leading authority on the patterns, fluctuations, and duration of the cycle is the National Bureau of Economic Research (NBER). Analysts at the NBER have identified highs, lows, and turning points of more than 30 U.S. business cycles since the mid 1800s.

The NBER, a nonpartisan organization, cites four stages of the economic cycle: expansion, peak, contraction, and trough, which they describe as follows:

“An expansion is characterized by increasing employment, economic growth, and upward pressure on prices. A peak is the highest point of the business cycle, when the economy is producing at maximum allowable output, employment is at or above full employment, and inflationary pressures on prices are evident. Following a peak, the economy typically enters into a correction, which is characterized by a contraction where growth slows, employment declines (unemployment increases), and pricing pressures subside. The slowing ceases at the trough, and at this point the economy has hit a bottom from which the next phase of expansion and contraction will emerge.” 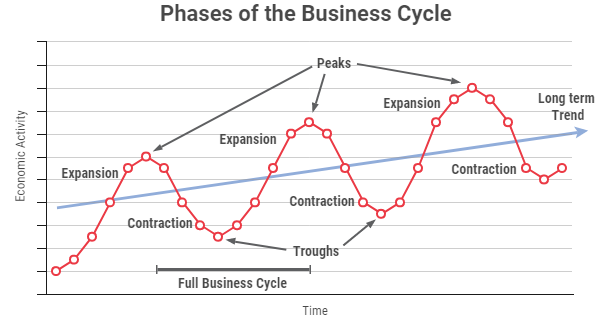 On September 20, 2010, the Business Cycle Dating Committee of the NBER determined that a trough in business activity occurred in the U.S. economy in June 2009. It marked the end of the recession that started in December 2007 and the beginning of the current economic expansion.

Hindsight? Not exactly. The committee measures GDP, employment, income, real sales, consumer spending, and even the Federal Reserve’s index of industrial production. And the committee carefully considers past patterns and historical averages.

For instance, the 2010 announcement also pointed out that the 2007–2009 contraction lasted 18 months and was “the longest of any recession since World War II.”

Ironically, that recession was preceded by the longest economic expansion on record—the 120 months (or 10 years) from March 1991 to March 2001. This period of economic growth concluded, according to the NBER, when business activity peaked in spring 2001, marking “the end of an expansion and the beginning of a recession.”

We are now 112 months into our current economic expansion, and the word “peak” is being tossed around with both caution and dread. A peak is the pinnacle of the business cycle, characterized by maximum output, full employment, and rising inflation.

And according to the NBER, a peak is also the end of an expansion followed by a contraction in which economic growth decelerates and unemployment rises.

This is when foresight needs to come in. You can reduce your odds of getting clobbered in the markets and preserve your wealth by understanding where we are in the current economic cycle. Is the economy still expanding? Has it actually peaked? Are we now in a pre-recession period and on our way to a trough bottom?

Honestly, any one of those high points is justification for diversifying out of volatile assets—taken together, however, they are nothing short of a rallying cry to secure a safe and strategic position with precious metals.