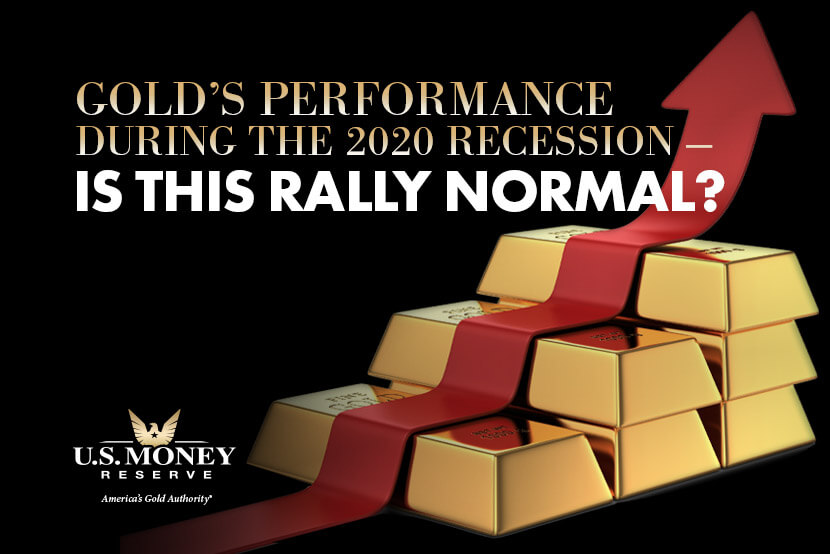 2020’s Massive Gold Market Rally: Is This Normal for a Recession?

It’s official. According to the National Bureau of Economic Research, the U.S. is in the midst of an economic recession. With gold prices hitting new milestones, some people wonder whether this is normal—is this how gold is supposed to perform during a recession? What might we expect in the coming months?

Learn about the current recession and what we can learn from gold’s past performance during recessionary times.

In June, the National Bureau of Economic Research declared that the U.S. had entered a recession, which the Bureau defines as a “broad contraction of the economy.” This contraction includes declines in employment and manufacturing. The Bureau determined that the current U.S. recession began in February.

No one knows when the recession will end. However, many economists predict it could conclude in late 2020 or early 2021.

How Does This Recession Differ From Others?

The Great Recession, which lasted from December 2007 to June 2009, hit the U.S. because of factors such as the subprime mortgage crisis, a dramatic cutback in bank-to-bank lending, and a stock market crash. In 2001, the dot.com recession resulted from tech stocks’ overinflation, the 9/11 terrorist attacks, and several accounting scandals. The Gulf War recession, which stretched from July 1990 to March 1991, was triggered by increases in interest rates that slowed the economy.

This time around, a public health crisis prompted the current recession—perhaps the worst economic calamity since the Great Depression. (By the way, what’s the difference between a recession and depression? Simply put, a depression is a more dramatic version of a recession.)

Bottom line: All recessions are not created equal. Any number of events could trigger a recession.

How Gold Performs During Recessions

During a recession, a time of great economic uncertainty, many people flock to gold as a “safe haven” versus, say, stocks or currency. Because gold is a tangible asset with a track record of independent performance, the yellow metal often is seen as a smart method for preserving wealth when the economy is shaky.

As such, it’s safe to say that a rally in the price of gold is not unusual during a recession. (Silver, too, has historically seen price spikes during recessions.)

In the middle of the Great Recession (March 2008), for instance, gold soared past the $1,000/oz. mark for a couple of days before settling in the $900/oz. range. And during the dot.com recession of 2001, the price of gold saw a generally upward trajectory.

Gold’s Performance During the 2020 Recession

This year, the price of gold also has enjoyed a lift amid recessionary conditions. In fact, gold broke a record in August, surpassing $2,000/oz. It climbed to a record high of $2,072.49/oz.

Some market watchers forecast gold could keep posting solid gains as a result of low U.S. interest rates, a weakened U.S. dollar, fears of inflation, and lingering trade tensions between the U.S. and China. Michael Cuggino, CEO of the Permanent Portfolio Family of Funds, believes it would “not be unreasonable” for gold to fly past $4,000/oz.

Results of a mid-September survey by Kitco News show that half of the Wall Street professionals who participated are bullish on gold. At the same time, 43% are essentially neutral, and just one analyst thinks gold prices would go down.

Analysts at Canadian bank CIBC forecast that gold prices could average $2,300/oz. in 2021.

“The outlook for continued low real interest rates, increasing government debt burdens coupled with geopolitical uncertainty arising from the upcoming U.S. election are all supportive of further significant price appreciation,” the analysts said in a report cited by Kitco News.

At U.S. Money Reserve, we’re always watching gold prices to better understand the gold market and serve our clients. You can watch and learn, too. Bookmark our Gold Price Chart and call U.S. Money Reserve when you’re ready to add gold to your portfolio.

A New Fiscal Year, a New Record High for the National Debt

I often write about how important I feel it is to plan ahead. When you know you have a bill due or a can’t-miss deadline coming, preparation is key to avoid rushing at the last minute. At the stroke of midnight on October 1, 2022, government funding for U.S. federal...