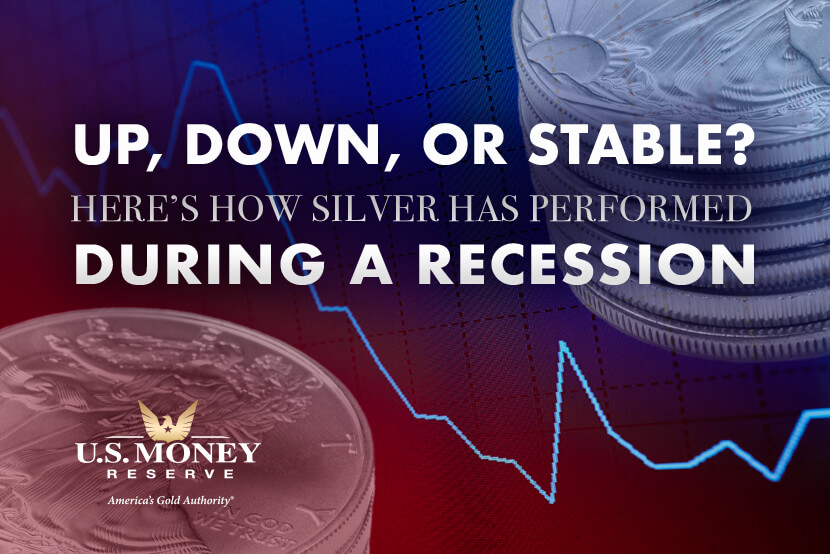 Up, Down, or Stable? Here’s How Silver Has Performed During a Recession

Precious metals have proven to be a timeless safe haven in times of uncertainty and especially downturns. That said, you’re more likely to hear market analysts talking about gold—not silver—when times get tough. Learn more about this often-overlooked precious metal and its historical performance before, during, and after a recession.

To get a sense of how silver performs, let’s look at a recent period of economic turbulence. You’ll see that recessions have historically been a ramp up period for silver prices and tend to set the precious metal up for solid price gains post-recession.

Silver During the Great Recession

Before March 2020, one of the steepest economic declines in the U.S. was the Great Recession. This economic fall-off officially started in December 2007 and lasted until June 2009.

The price of silver went through several swings during the Great Recession, with a roughly $10/oz. gap between the high and low prices.

Therefore, if you had purchased one ounce of silver at its lowest price ($9.09/oz.) during the Great Recession, its market price tag would have shot up 435.8 percent by the time it reached its post-recession high of $48.70/oz.

Could silver surpass a high of $48.70/oz. following another recession? The precedent has been set. That means it could be an opportunity to buy silver now—while the price sits around $15/oz.

There’s a silver lining for both silver buyers and owners when it comes to silver prices before, during, and after a recession.

If you’re looking to increase your position in silver, consider buying in bulk. Buying bulk silver is a way to achieve large-scale financial diversification, fast. Bulk silver purchases also afford buyers “economies of scale” benefits. The more you buy at one time, the more you save.

If you’re already well-positioned with silver when a recession strikes, it could benefit you to maintain your course. Silver prices have a documented history of bouncing back and hitting new highs following a recession. And silver isn’t going anywhere anytime soon. It’s played a role as a trading metal in nearly every ancient and modern culture, notes The Silver Institute, and continues to earn its place in the portfolios of different types of people for that very reason.

A Note on the Gold-to-Silver Ratio

No one knows precisely how silver will perform during the current economic crunch—or any economic slump. However, tracking the gold-to-silver ratio can help you determine when it might be a good time to buy silver (or to buy gold instead).

The gold-to-silver ratio measures how many ounces of silver it takes to buy one ounce of gold. A smaller number signals that silver is outperforming gold, while a larger number indicates that gold is outperforming silver.

Theoretically, the bigger the number, the more silver you’d need to buy one ounce of gold. If you keep your eye on the prices of these two precious metals, you can easily calculate the ratio by dividing the price of gold by the price of silver.

What’s a typical gold-to-silver ratio? Historical patterns show that it’s about 50:1. During a recession, though, the ratio often shifts dramatically. A rule of thumb is that if the ratio surpasses 80:1, it means the buying opportunity for silver might be particularly attractive.

In 2003, someone who purchased silver after the ratio reached 80:1 enjoyed returns of 390 percent in five years, according to U.S. News & World Report. And if someone had bought silver in November 2008, when the gold-to-silver ratio had increased to 80:1, and had then held off on selling the silver until April 2011, the gains would have been 350 percent, U.S. News & World Report notes.