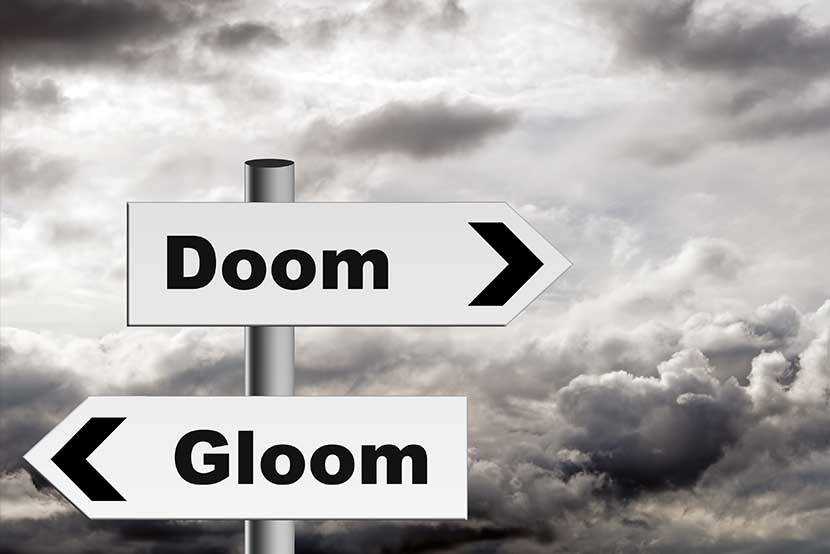 I was in New York last week to meet with reporters who cover the gold market. Twice I was asked about the “doom and gloom” messages commonly used to sell physical gold. I have two thoughts on that question.

Gold sellers know that many of their most reliable buyers view gold as the only secure foundation of a nation’s currency. They also know that gold buyers are pessimistic about the state of our economy, our country and our world — partly because the world has abandoned the gold standard. These buyers have a strong attachment to gold and see it as the most, if not the only, reliable hedge against economic and political turmoil.  Gold sellers stick with the same sales messages for the same customers because they work.

I’m an optimist by nature, but I look around these days and there’s no escaping the fact that it’s a pretty gloomy picture out there.  There are good reasons for pessimism often overlooked or forgotten in our attention span-shattered, headline-driven culture. Today, markets are hyper-focused on stronger corporate profits and stock prices, reassurance from the Fed about interest rates, stronger economic numbers and the apparent stabilization of Europe. But the fact is, nothing’s really changed to warrant our mood swing.

Unemployment is not improving

Despite the happy talk that the nation’s employment situation is improving, the numbers show no such thing. The Fed says it will end QE3 when the unemployment rate hits 6.5 percent. But, in June, the rate stood at 7.6 percent, down only .2 percent from nine months ago. At that rate it will be a very long time before we hit 6.5 percent.

The mainstream media has also overlooked the fact that the “real” unemployment rate, which includes those who want full-time work but have temporarily accepted part-time positions, increased from 13.8 percent to 14.3 percent in June, while long-term unemployment rose. Also, those jobs that were created in June were low-wage jobs. The number of high-wage manufacturing jobs fell.

Yet, the media focused on speculation that employment would continue to improve to the point the Fed could start ramping down QE3 in the fall. This response is all the more baffling because, since the Great Recession began, the Fed has repeatedly issued economic forecasts that proved to be too optimistic.

More disturbing is that we've utterly failed to address the causes of the 2008 financial meltdown. Too-big-to-fail banks are bigger than ever, and the too-big-to-jail bankers, never held accountable for their actions, have grown ever bolder in putting our economy at risk for their own personal gain. The world’s financial system is more vulnerable today than it was in 2007.

Looking beyond the U.S., economic conditions in Europe are deteriorating as unemployment worsens and popular resistance to austerity deepens. The Chinese economy, which has been the strongest driver of global economic growth in recent years, is slowing down, as are other emerging economies. No progress has been made in resolving the nuclear standoffs with Iran and North Korea, and the threat to world oil supplies posed by instability and conflict in the Middle East has only grown with time.

I happen to think global climate change is real. Many others do, too, but disagree on whether it’s attributable to man or to natural climate cycles. Whichever it is, the implications of climate change are profound. Will humans survive? Sure we will. But that’s not really the question — the real questions are: How many humans will a changed climate support and what will life be like for those who go through the transition? Not pretty, I suspect.

And in the face of all of these challenges, policy makers seem incapable of taking effective action.

One reason Americans are so productive and resilient is that they’re optimists. You might tend to look on the bright side like I do, but it’s hard not to concede the pessimists have a point, and research suggests they have a more realistic view of the world than optimists do.

The value of gold

From time immemorial, gold has been a reliable store of value in difficult times. Pessimists are more likely to own gold at such times and often they’re glad they do.

In my next post, I’ll discuss why gold should have a strategic role in the portfolios of investors who do not share this darker view of the future.