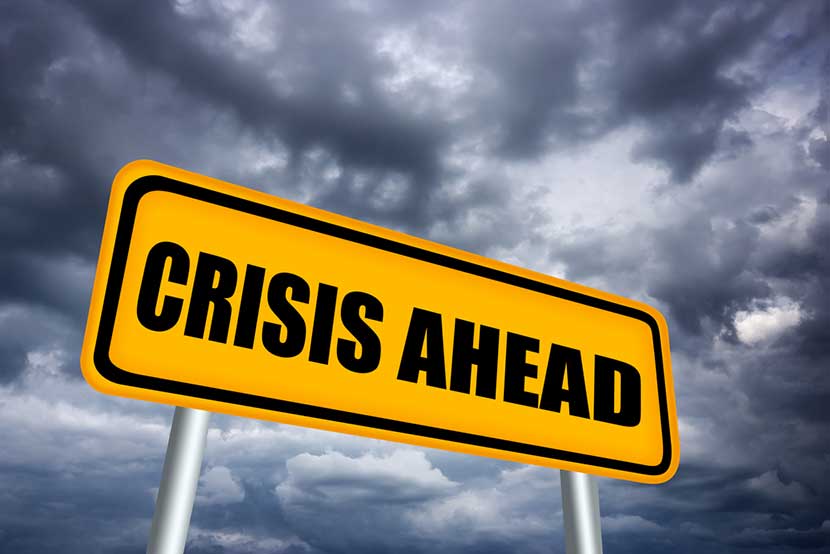 The City of London’s most vocal “bear” has warned that the world is heading for a financial crisis as severe as the crash of 2008-09 that could prompt the collapse of the eurozone.

Albert Edwards, strategist at the bank Société Générale, said the west was about to be hit by a wave of deflation from emerging market economies and that central banks were unaware of the disaster about to hit them. His comments came as analysts at Royal Bank of Scotland urged investors to “sell everything” ahead of an imminent stock market crash.

“Developments in the global economy will push the US back into recession,” Edwards told an investment conference in London. “The financial crisis will reawaken. It will be every bit as bad as in 2008-09 and it will turn very ugly indeed.”

Fears of a second serious financial crisis within a decade have been heightened by the turbulence in markets since the start of the year. Share prices have fallen rapidly and a slump in the cost of oil has left Brent crude trading at barely above $30 a barrel.

“Can it get any worse? Of course it can,” said Edwards, the most prominent of the stock market bears – the terms for analysts who think shares are overvalued and will fall in price. “Emerging market currencies are still in freefall. The US corporate sector is being crushed by the appreciation of the dollar.”

The Soc Gen strategist said the US economy was in far worse shape than the country’s central bank, the US Federal Reserve, realised. “We have seen massive credit expansion in the US. This is not for real economic activity; it is borrowing to finance share buybacks.”

Edwards attacked what he said was the “incredible conceit” of central bankers, who had failed to learn the lessons of the housing bubble that led to the financial crisis and slump of 2008-09.

“They didn’t understand the system then and they don’t understand how they are screwing up again. Deflation is upon us and the central banks can’t see it.”

Edwards said the dollar had risen by as much as the Japanese yen had in the 1990s, an upwards move that pushed Japan into deflation and caused solvency problems for the Asian country’s banks. He added that a sign of the crisis to come was the collapse in demand for credit in China.

“That happens when people lose confidence that policymakers know what they are doing. This is what is going to happen in Europe and the US.”

Europe has shown tentative signs of recovery in the past year, but Edwards said the efforts of the European Central Bank to push the euro lower and growth higher would come to nothing in the event of a fresh downturn. “If the global economy goes back into recession, it is curtains for the eurozone.”

Countries such as France, Spain and Italy would not accept the rising unemployment that would be associated with another recession, he said. “What a disaster the euro has been: it is a doomsday machine in favour of the German economy.”

e warning from Edwards came as stock markets had a respite from the wave of selling seen since the start of the year. The FTSE 100 index rose by 57 points to close at 5,929, while the Dow Jones Industrial Average was up by 10 points in early trading in New York.

The mood in equity markets was helped by intervention by the People’s Bank of China overnight to support the yuan, with the Chinese currency moving higher on foreign exchange markets.

Edwards joked that after years in which he has tended to be a lone voice, other institutions were also becoming a lot gloomier about global prospects.

He was referring to the RBS advice, which warned that investors face a “cataclysmic year” where stock markets could fall by up to 20% and oil could slump to $16 a barrel.

In a note to its clients the bank said: “Sell everything except high-quality bonds. This is about return of capital, not return on capital. In a crowded hall, exit doors are small.” It said the current situation was reminiscent of 2008, when the collapse of the Lehman Brothers investment bank led to the global financial crisis. This time China could be the crisis point, RBS said.

This story originally appeared in The Guardian by Larry Elliott on January 12, 2016. View article here.