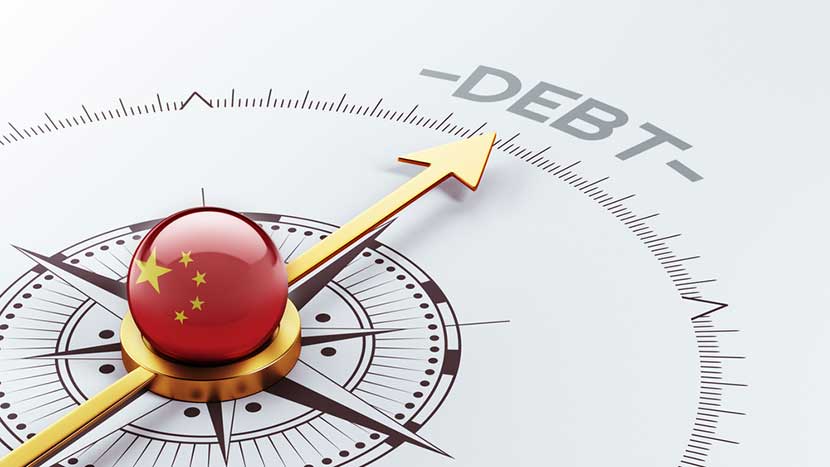 China’s total debt rose to a record 237 per cent of gross domestic product in the first quarter, far above emerging-market counterparts, raising the risk of a financial crisis or a prolonged slowdown in growth, economists warn.

Beijing has turned to massive lending to boost economic growth, bringing total net debt to Rmb163tn ($25tn) at the end of March, including both domestic and foreign borrowing, according to Financial Times calculations.

Such levels of debt are much higher as a proportion of national income than in other developing economies, although they are comparable to levels in the US and the eurozone.

While the absolute size of China’s debt load is a concern, more worrying is the speed at which it has accumulated — Chinese debt was only 148 per cent of GDP at the end of 2007.

“Every major country with a rapid increase in debt has experienced either a financial crisis or a prolonged slowdown in GDP growth,” Ha Jiming, Goldman Sachs chief investment strategist, wrote in a report this year.

Economists say it is difficult for any economy to deploy productively such a large amount of capital within a short period, given the limited number of profitable projects available at any given time. With returns spiralling downwards, more loans are at risk of turning sour.

According to data from the Bank for International Settlements for the third quarter last year, emerging markets as a group have much lower levels of debt, at 175 per cent of GDP.

The BIS data, which is based on similar methodology to the FT, put Chinese debt at 249 per cent of GDP, which was broadly comparable with the eurozone’s figure of 270 per cent and the US level of 248 per cent.

Beijing is juggling spending to support short-term growth and deleveraging to ward off long-term financial risk. Recently, however, as fears of a hard landing have intensified, it has shifted decisively towards stimulus.

New borrowing increased by Rmb6.2tn in the first three months of 2016, the biggest three-month surge on record and more than 50 per cent ahead of last year’s pace, according to central bank data and FT calculations.

Economists widely agree that the health of the country’s economy is at risk. Where opinion is divided is on how this will play out.

At one end of the spectrum is acute financial crisis — a “Lehman moment” reminiscent of the US in 2008, when banks failed and paralysed credit markets. Other economists predict a chronic, Japan-style malaise in which growth slows for years or even decades.

Jonathan Anderson, principal at Emerging Advisors Group, belongs to the first camp. He warns that banks driving the huge credit expansion since 2008 rely increasingly on volatile short-term funding through sales of high-yielding wealth management products, rather than stable deposits. As Lehman and Bear Stearns proved in 2008, this kind of funding can quickly evaporate when defaults rise and nerves fray.

“At the current rate of expansion, it is only a matter of time before some banks find themselves unable to fund all their assets safely,” Mr Anderson wrote last month. “And at that point, a financial crisis is likely.”

Others believe the People’s Bank of China will retain its ability to ward off crisis. By flooding the banking system with cash, the PBoC can ensure that banks remain liquid, even if non-performing loans rise sharply. The greater risk from excess debt, they argue, is the Japan scenario: a “lost decade” of slow growth and deflation.

“It is wrong to assume that ‘too much debt’ is bad only if it causes a crisis, and this is a typical assumption made by almost every economist,” Prof Pettis wrote in a draft of an forthcoming paper shared with the Financial Times.

“The most obvious example is Japan after 1990. It had too much debt, all of which was domestic, and as a consequence its growth collapsed.”

Distress costs include increased labour churn as employees migrate to financially stronger companies; higher financing costs to compensate for increased default risk; demands for immediate payment from jittery suppliers; and loss of customers who worry a company may not survive to provide aftersales service.

Many are now concerned that China’s debt could lead to a so-called balance-sheet recession — a term coined by Richard Koo of Nomura to describe Japan’s stagnation in the 1990s and 2000s. When corporate debt reaches very high levels, he observed, conventional monetary policy loses its effectiveness because companies focus on paying down debt and refuse to borrow even at rock-bottom interest rates.

“A financial crisis is by no means preordained but in our view, if losses don’t manifest on financial institution balance sheets, they will do so via slowing growth and deflation, à la Japan, a path China arguably already is on,” Charlene Chu, senior partner at Autonomous Research Asia, wrote recently.