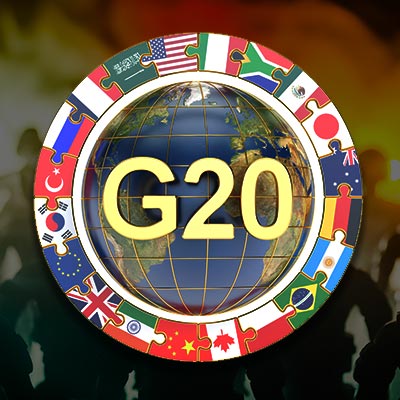 The G20 Summit? Breakthrough or Breakdown?

Each year we watch various heads of state assemble for a power yearbook photo at prominent locations like Washington, London, Toronto, Seoul, Cannes, Brisbane, Hangzhou and Hamburg. There are global round tables, strategic side meetings and broad announcements of international cooperation. The G20 (Group of 20) summit brings together the world’s largest economies and most influential governments with the overriding goal of promoting global financial stability.

German Chancellor Angela Merkel, host of this year’s summit, put forth the theme a “networked world.” This implies interconnections and alliances. President Trump, however, stood alone in opposition to climate change. He had previously pulled out of the Paris Climate Agreement to which the remaining G20 members reaffirmed via an “irreversible accord.” Similarly, while attendees signed reciprocal trade deals, Trump threatened new tariffs on steel imports due to Chinese price fixing. The U.S. president was also at odds with summit members on what he deemed to be an unsustainable open-door refugee policy. There was common ground, however, on working to prevent worldwide terror attacks and to confront the immediate danger posed by Kim Jong-un and North Korea.

Merkel also had to contend with violent protestors. In Hamburg, rioters set fires in the street and looted local businesses. Some staged sit-ins, others tossed smoke bombs. They carried signs that read, “Welcome to Hell” and “Capitalism Kills,” and attempted to breach restricted areas with the express purpose of disrupting the distinguished gathering. There were 186 arrests and over 400 police officers injured. Unfortunately, the 2017 G20 will be forever tainted by images of cops in riot gear, armored water cannon tanks, and streams of pepper spray erupting from riot lines.

So, who are these protestors that seem to make their way to every high profile gathering of world leaders?

Some of these protestors are anti-fascist activists, others are anti-globalists, and still others are radical climate crusaders. At a press conference at the conclusion of the summit, Merkel stated, “I wholeheartedly condemn the unfettered violence and uninhibited brutality against police during the days of the G20 summit.”.

For Trump’s part, he deemed the G20 a “great success.” He had his much anticipated mini-summit with Vladimir Putin where he pressed the Russian president on election meddling. He again pressured Chinese President Xi Jingping on North Korea’s nuclear threats and reached a ceasefire deal with Russia on Syria. To the relief of many in Europe, Trump reconfirmed America’s allegiance to Article 5, embracing the long-held creed that “an attack on one is an attack on all” as the United States vowed to defend its allies in the event of a provocation or war. Trump also announced a $50M commitment to a women’s entrepreneurial initiative spearheaded by his daughter, Ivanka.

The media, however, has been less than enthusiastic about Trump’s latest foray onto the world stage. An Australian journalist deemed Trump as “isolated and friendless” in Hamburg. USA Today said Trump wasn’t really part of the summit. The Financial Times called the president a threat to American security. And, according to CNN, the entire G20 gathering was a rebuke of Trump’s decision to withdraw from the Paris Climate Accord. As climate talks broke down, French President Emmanuel Macron declared, “Our world has never been so divided.”

So, whether Trump was successful in Hamburg, very much depends upon who you ask. Was it a productive gathering that highlighted the opportunities for international cooperation and strategic global alliance? Or, is Trump’s “America First” policy simply at odds with the G20 style of globalism? Perhaps the new French president summarized it best when he said, “Centrifugal forces have never been so powerful. Our common goods have never been so threatened.” In reflecting on the summit’s successes, stalemates and protests, Merkel added, “When we meet here, many, many people out there expect us to come up with results.” Results, however, have proven elusive as key issues of global cooperation were still unresolved as the summit came to a close.