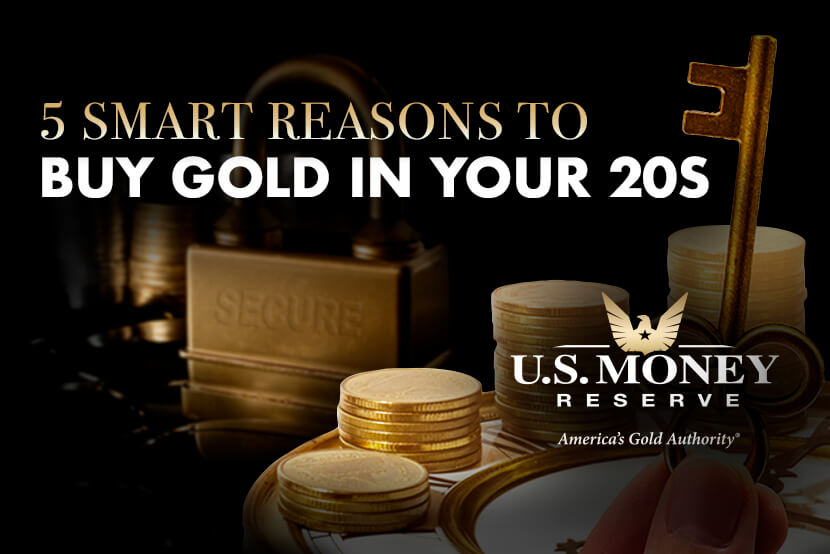 You might be striving to pay off student loans and save up for a house. Or you might still be trying to master the art of monthly budgeting.

Either way, you probably know you should save something for later in life. Gold can help with that, as well as other financial goals. The same advice applies if you’re buying gold for someone else who’s in their 20s. As America’s Gold Authority®, U.S. Money Reserve is here to explain why.

1. Historically, gold prices have gone up over the long term.

If only your pizza budget had gone up that much when you were in school.

The surge in gold prices has proven to shine at the one-year, three-year, and ten-year intervals, too.

You don’t need to be a math genius to see that, over time, buying and holding onto gold can add up to a smart decision.

Overall, millennials tend to be more financially cautious than folks from other generations. In some cases, that’s because their parents were hammered during the Great Recession. As such, many millennials are looking for—and buying—safe-harbor assets like gold.

Conversely, a 2018 study by Legg Mason showed millennials have less money tied up in equities (20 percent) than their 71-and-over counterparts (31 percent).

So unlike those who are in their golden years, millennials might see more financial advantage to holding gold before equities. After all, the earlier you buy gold and the longer you hold on to it, the more you stand to potentially gain!

3. Gold is not a cryptocurrency.

While some millennials may be buzzing about cryptocurrency, just 22 percent of people ages 18 to 34 surveyed in an April 2019 Harris Poll indicated they’d prefer allocations in bitcoin (the most popular type of cryptocurrency) over gold. In that age group, only 18 percent owned bitcoin.

Why are millennials less than enthusiastic about bitcoin? Perhaps it’s because bitcoin and other kinds of cryptocurrency, or digital currency, are “very risky,” according to investment giant Charles Schwab. “The industry is not regulated, and the currency is not backed up by any kind of government or central bank.”

In fact, one millionaire who’s interested in both gold and cryptocurrency told Forbes.com that the one thing everybody should own is precious metals, and these should comprise five to ten percent of a portfolio. It’s worth noting that he didn’t say the same thing about cryptocurrency.

Diversity in society and diversity in the workplace are important to millennials. Portfolio diversification should also be.

You’d be hard-pressed to find a financial advisor who’d recommend putting your entire nest egg in one retirement basket, whether that basket is equities or real estate. Instead, many experts recommend that alternative assets, like gold and other precious metals, be part of the mix.

As noted by the financial website TheStreet.com, the first rule of thumb when buying gold is a concept known as dollar-cost averaging. Dollar-cost averaging refers to putting a fixed amount of money toward gold every month, no matter what the price is. For the typical asset holder, this strategy spreads risk over time and could decrease any downsides.

Where do you find the money for gold? For one, you could consider cutting expenses elsewhere and putting the savings in gold. Think about it: Kicking your five-day-a-week mocha latte habit could produce roughly $100 a month for buying gold. That daily coffee concoction might give you a caffeine boost in the short term, but gold will likely supply a longer-lasting financial boost. Which boost would you rather have in the long run?

5. A long-term commitment to gold can pay off.

The price of gold has enjoyed a track record of increases. If you commit to steady purchases of gold over time, you can probably experience yields from years and years of buying and holding those assets—especially if you start buying gold in your 20s, decades before you’re ready to retire. This style of asset building makes far more sense than merely buying one gold coin and stashing it in a desk drawer next to your overflowing collection of old pens and pencils.