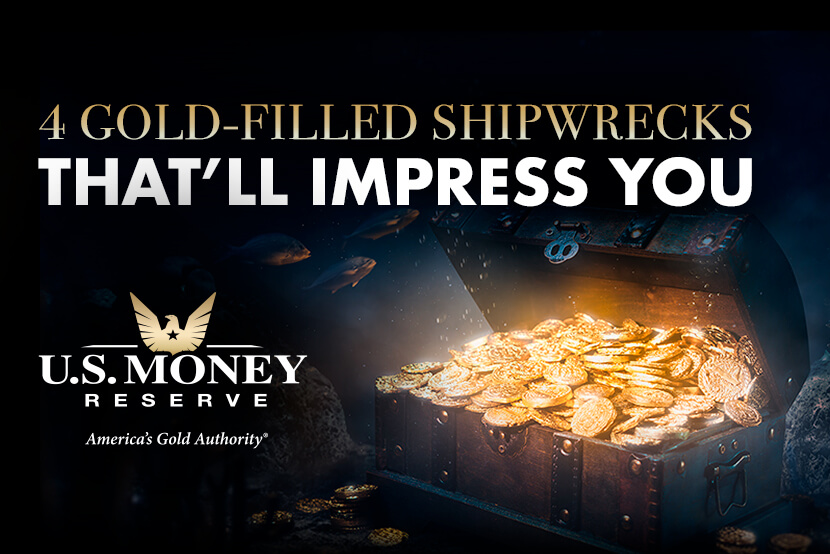 The sea holds many mysteries. Few of them are as captivating as the final resting places of vessels transporting gold coins, bullion, and bars.
Sometimes, enterprising treasure hunters solve one of these mysteries—and the sunken treasure they find is amazing. Here are four gold-filled shipwrecks you need to see to believe!

The Vessel: S.S. Republic
The Value: $75 million (with potentially $140 million remaining unsalvaged)
The Narrative: A hurricane cut short this ship’s trip to New Orleans, causing it to go down in the waters off the Georgia coast in 1865.
The good news: Everyone on board survived. The bad news: All of the gold coins intended for use as hard currency after the Civil War went down with the ship, and they stayed with the sunken ship until 2003. In 2003, an archaeology firm located the S.S. Republic about 100 miles off Savannah’s coast.
The S.S. Republic is the first of two gold-laden wartime shipwrecks on our list. Warring nations placed a lot of importance on the precious metal, underscoring the fact that physical gold has long been a sought-after form of currency and an asset of extreme interest.

The Shipwreck Gold of the Pirates

The Vessel: Whydah Gally
The Value: $400 million
The Narrative: The most precious cargo aboard the uniquely named Whydah Gally was her 146-member crew. Sadly, only two crew members survived the ship’s collision with a sandbar in 1717. Also lost was the gold and silver treasure the ship held, allegedly collected from more than 50 other ships and gathered in 180 bags. With that much treasure aboard, the Whydah Gally can safely be dubbed a bonafide pirate ship.
An underwater explorer found the wreckage in 1984. Artifacts and more are now on display in the Whydah Pirate Museum of Massachusetts. There aren’t any shipwreck gold bars there, though. Rather, the wreckage of the Whydah Gally included shipwreck gold coins—a large cache of them.

The Vessel: San Jose
The Value: $17 billion
The Narrative: Just as war informed the fate of the S.S. Republic, so too did war play a role in the fate of the San Jose. The ship hosted a crew of 600 people, 62 guns, and a treasure made up of gold, silver, and more—valued today at a whopping $17 billion.
The British sank the Spanish vessel off the coast of Cartagena during the War of the Spanish Succession (1701–1714). The Colombian city’s waters held the wreckage until an oceanographic institution located it in 2015.

The Vessel: Multiple Spanish ships (names unknown) that sank in 1715
The Value: $5.5 million recovered
The Narrative: The dollar amount might not be significant compared to that of other shipwrecks listed here. However, a collection of sunken ships off the coast of the Florida city Vero Beach wields a compelling twist. The twist? The odds are good that plenty of Vero Beach residents and guests swam above this treasure for centuries.
In 2015, modern treasure hunters recovered millions of dollars worth of gold coins in shallow water—just six feet deep. For comparison, the San Jose’s final resting spot was 2,000 feet underwater. Next time you swim at the beach, you might be far closer to untold riches than you can imagine!

An Alternative to Shipwreck Gold

Every week, network television shows feature detectives looking to solve whodunits. But there are other real-life detectives at work solving different sorts of mysteries—mysteries of shipwrecks with gold coins, bullion, and bars the world over.
If your interest in gold extends beyond these true-life tales, America’s Gold Authority® is here for you. Thanks to U.S. Money Reserve, you can browse gold and silver coins and bars online from the comfort of your home. Shop online or contact an Account Executive at 1-844-307-1589 today.