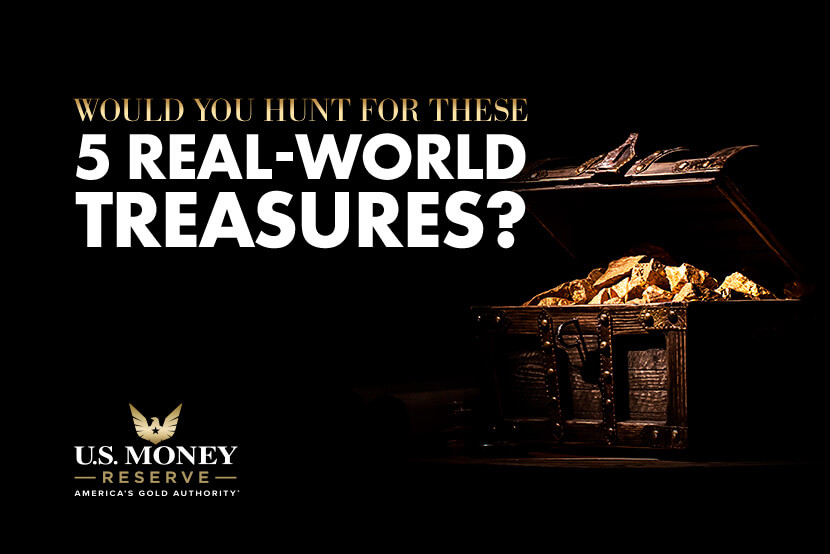 Would You Hunt for These 5 Real-World Treasures?

Is there buried treasure where you live? Hidden treasure still exists. It could be in your backyard or buried at a nearby beach. Take a trip around the world with us to learn more about five lost treasures that might be waiting for you—if only you can find them!

Ark of the Covenant

This legendary artifact is the ornate, gold-plated case that Israelites built about 3,000 years ago to house the stone tablets bearing the Ten Commandments, according to National Geographic.

No one knows whether the Ark of the Covenant actually exists and, if so, where it is. The ark did have a starring role in the 1981 movie Raiders of the Lost Ark, though.

“There is only one man alive who has seen the alleged ark in all its biblical glory. According to Ethiopian lore, it is hidden in a church in Aksum—a small city in the northern highlands—and guarded by a single monk. Nobody else enters the room, and only after his death will the monk leave the grounds,” The Daily Beast reports.

Eighteenth-century pirate Edward “Blackbeard” Teach supposedly buried treasure during his heyday. But all these years later, people still wonder whether it exists and where it might be.

“Most historians suspect that Teach (like most pirates) didn’t get around to making desert-island deposits of gold and jewels during his reign, but there are still several places where, given what we’ve learned about him in the past three centuries, the treasure could have ended up,” the Mental Floss website observes.

For instance, Blackbeard’s treasure may be somewhere along the coast of North Carolina or in the Caribbean. However, you don’t have to bank your future on finding this treasure (or any other treasure). If you’re interested in accumulating your own “treasure,” you might consider gold and silver coins or bars.

The notorious Jesse James and his gang of outlaws made a name for themselves in the 19th century. Today, some Americans still have James on their minds.

Tales of James’s lost riches, said to be worth more than $1 million, continue to fascinate history buffs and fans of the Wild West. While nobody has discovered the stash, it’s most likely somewhere near Robbers Cave in Oklahoma’s Wichita Mountains, according to Reader’s Digest.

Nazi Loot in the Catskill Mountains

Is there money in “them thar mountains”? Maybe.

In 1942, two Nazi spies hijacked the plane of the German immigrant and aviation aficionado Otto Hillig. The hijacking ended in a midair struggle that left the Nazi soldiers dead, according to PBS.

Hillig then stole the money the soldiers had but didn’t want to keep it, PBS reports, so he hid it somewhere in the Catskill Mountains of New York and left clues for others to find the money via his trusted assistant. The money still hasn’t been found.

The mystery surrounding the whereabouts of a 220-pound Maple Leaf gold coin is perhaps even bigger than the coin itself.

In 2020, three men were sent to jail for stealing this coin from a museum in Berlin in 2017, according to Courthouse News Service. Yet the coin remains missing.

“Prosecutors assume the nearly pure-gold treasure, which bears a profile image of Queen Elizabeth II, was either cut up, melted down, or taken abroad,” the News Service notes. “The coin has a…value of $750,000, but the gold itself is worth considerably more.”

You can purchase Maple Leaf gold coins for your precious metals portfolio at a fraction of that cost, though. Unlike the lost 220-pound Maple Leaf coin, they’re easily within reach and can be delivered straight to your door.

While fun to think about, these stories of lost loot and buried treasure don’t make for a solid financial foundation. Jesse James, Blackbeard, and others learned that the hard way. Don’t bank your financial future on buried treasure. Learn how you can strengthen it with precious metals from U.S. Money Reserve.

END_OF_DOCUMENT_TOKEN_TO_BE_REPLACED

There are a lot of unknowns in this world, but they shouldn’t frighten us into inaction. As of this writing, we’re still waiting on a potential declaration of whether or not we are in a recession while the Federal Reserve continues to fight high inflation. Back in...