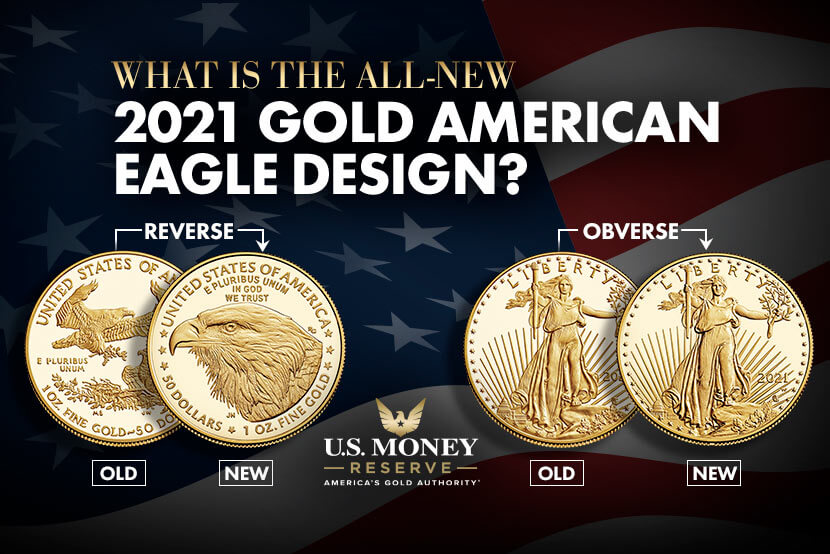 Have You Seen the All-New 2021 Gold American Eagle Design?

In honor of the series’ 35th anniversary, the U.S. Mint introduced new reverse designs for the first time in the history of the American Eagle coin. See what has changed, what hasn’t, and why there’s so much more to love about American Eagle coins.

To mark the 35th anniversary of the American Eagle Coin Program, the Mint announced in 2020 that it would roll out a redesign of the reverse (tails side) of American Eagle coins. The redesigned coins became available in July of 2021.

The new design of the bullion and proof versions of the Gold American Eagle depicts a portrait of an eagle. Inscriptions include “United States of America,” “E Pluribus Unum,” and “In God We Trust.”

Arizona artist Jennie Norris, a former raptor handler, created the design, and Mint artist Renata Gordon sculpted it. Norris says she drew inspiration for the design from her deep connection with wildlife.

“The American eagle is such a noble bird,” Norris explains. “I was hoping to capture the intensity of his stare through the close cropping. His gaze speaks of pride and wisdom passed down through generations of time.”

The original reverse side of the Gold American Eagle features a design created by sculptor Miley Busiek Frost and sculpted by painter and sculptor Sherl J. Winter. In this design, a male eagle carrying an olive branch flies above a nest occupied by a female eagle and hatchlings.

While the reverse of the Gold American Eagle has changed, the obverse (heads side) has been updated with a fresh perspective of Lady Liberty.

The obverse of the revamped Gold American Eagle continues to bear versions of historic designs that have been featured on these coins since 1986. The coin’s obverse displays a refreshed depiction of a 1907 design by renowned sculptor Augustus Saint-Gaudens.

Saint-Gaudens initially produced his likeness of Lady Liberty at the invitation of President Theodore Roosevelt. The coin’s full-length figure of Lady Liberty with flowing hair shows her holding a torch in her right hand and an olive branch in her left hand.

The Birth of the American Eagle Coin Program

The American Eagle Coin Program is one of the U.S. Mint’s most popular coin programs. The Gold Bullion Coin Act of 1985, signed into law by President Ronald Reagan, paved the way for the program. The Mint introduced the coins a year after the law’s passage.

The Gold Bullion Coin Act authorized the Mint to produce gold coins in $50, $25, $10, and $5 denominations. The law was aimed at helping the U.S. capture a share of the global market for gold coins.

Why Should You Buy Gold American Eagle Coins?

The Gold American Eagle coin is a solid addition to a precious metals portfolio thanks to gold’s history as a store of wealth, hedge against inflation, protector against the weakness of the U.S. dollar, and asset that can help weather geopolitical uncertainty.

The U.S. government guarantees the weight, content, and purity of these coins. They can even be added to a self-directed precious metals IRA. Gold American Eagle coins can be bought through trusted dealers like U.S. Money Reserve. They are not available directly from the U.S. Mint.