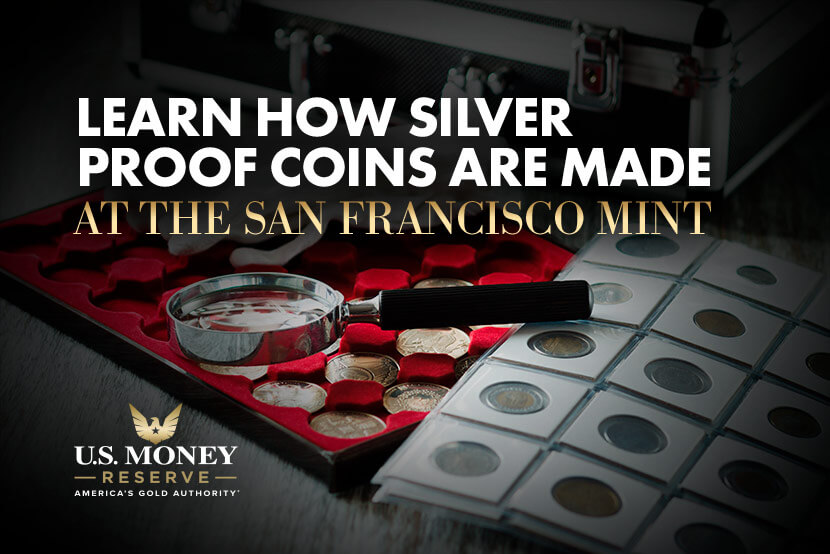 You like to know a company’s history before you buy its stock, where your accountant went to school, and what inspired your favorite author’s new novel. You’re curious and thoughtful, especially when it comes to how you spend your time and money. Why not get to the bottom of where your silver coins come from, too? Learn how some of the most beautiful and time-honored Silver American Eagle Proof coins are made at the San Francisco Mint and how you can secure some for yourself.

The San Francisco Mint, which opened in 1854 in response to the California Gold Rush, produces our country’s clad and silver proof coin sets, as well as commemorative coins as instructed by Congress. That includes the newly redesigned Silver American Eagle Proof coins. The San Francisco facility no longer mints circulating coins.

Proof coins made of silver or any other metal are the highest-quality coins produced by the Mint. “Proof” refers to the coin’s finish.

Proof blanks are specially treated, hand-polished, and cleaned to ensure high-quality strikes. The blanks are then fed into presses fitted with specially polished dies and struck at least twice. Striking a coin at least twice gives it a frosted, sculpted foreground to generate a “glamorous” shine, according to the U.S. Mint, as well as an intricate design and a mirror-like background.

Finally, proof coins are packaged in a protective capsule to showcase and preserve their finish.

The Newest Silver Proof Coins Made in San Francisco

Minted since 1986, these coins have been updated with a refreshed obverse and a completely redesigned reverse (tails side) to mark this year’s 35th anniversary of the American Eagle Coin Program.

Like its West Point–minted counterpart, the obverse of the San Francisco–minted coin features a refreshed depiction of Adolph A. Weinman’s full-length figure of Lady Liberty in full stride, enveloped in folds of the flag, with her right hand extended and branches of laurel and oak in her left hand. The Mint uses advanced technology to create a design that now more closely reflects Weinman’s original vision and includes his traditional artist’s mark. Inscriptions are “LIBERTY,” “IN GOD WE TRUST,” and “2021.”

The redesigned reverse depicts a branch-carrying eagle as it prepares to land. Inscriptions are “UNITED STATES OF AMERICA,” “E PLURIBUS UNUM,” “1 OZ. FINE SILVER,” and “ONE DOLLAR.”

In addition to a redesigned reverse and enhanced design details on the obverse, the redesigned American Silver Eagle coins have been minted in high detail using new technology. The Mint says this new technology helps prevent the coins from being counterfeited.

U.S. Money Reserve specializes in government-issued gold and silver coins, including Proof Silver Eagles. Call now to learn more about American Eagle coins and to see how silver could play a pivotal role in diversifying your portfolio.