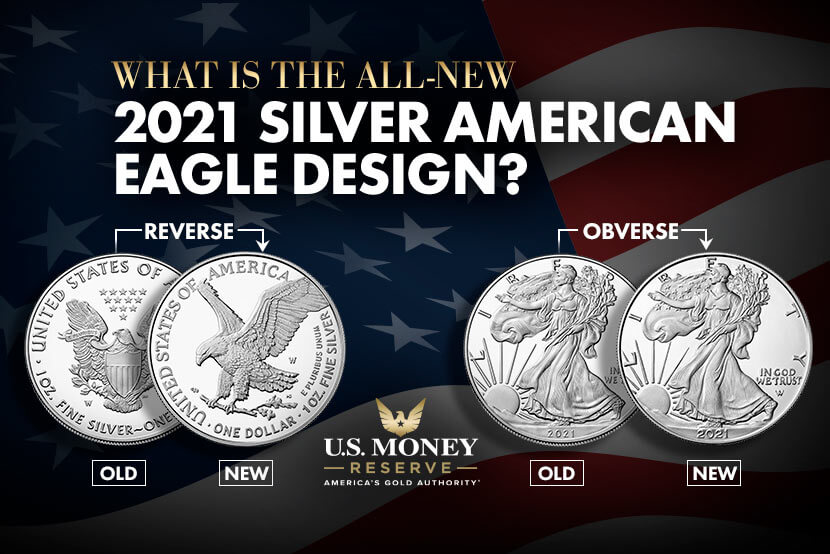 The 2021 Type 2 Silver Eagle Has Landed at U.S. Money Reserve

The American Silver Eagle coin has undergone its first major facelift in 35 years with the 2021 Type 2 coin release. And U.S. Money Reserve has all the details. See what’s changed, what hasn’t, and why there’s so much to love about American Eagle coins—especially the Silver Eagle.

Since being introduced in 1986, the design of the U.S. Mint’s American Silver Eagle coin had stayed the same until this year. The Mint decided to change the design of the reverse (tails side) of the coin to mark its 35th anniversary.

Even today, the obverse (heads side) of the coin features “Walking Liberty,” designed by sculptor Adolph A. Weinman and appearing on the 1916 half-dollar. “Liberty walks in profile, draped in the folds of the American flag. Her right arm is extended, and she carries laurel and oak branches in her left,” the Mint notes.

The reverse of the original American Silver Eagle previously showed John Mercanti’s “Heraldic Eagle” in flight. The eagle grasped an olive branch in one talon and arrows in the other. Thirteen stars hovered above the eagle’s head, signifying the 13 original American colonies.

Now, the reverse of the American Silver Eagle depicts a bald eagle carrying an oak branch and coming in for a landing as it prepares to land in a nest.

Freelance natural science illustrator Emily Damstra developed the new design for the reverse. Michael Gaudioso, who recently retired from the U.S. Mint as a sculptor-engraver, sculpted the design.

“My inspiration for this design grew from a desire to show our national bird—with all of the values it embodies—in a unique way that could also convey traits such as diligence, cooperation, care, and protection,” Damstra explains.

Aside from the new design, the American Silver Eagle also boasts new technology.

The Mint explains that the redesigned coin has “been minted in high detail using new technology and includes a reed pattern variation. The Mint benchmarked its efforts against anti-counterfeiting programs implemented by major mints around the world. These new features will make the coins more difficult to counterfeit.”

Why Should You Buy American Silver Eagle Coins?

Regardless of its design, the American Silver Eagle provides a cost-effective, time-honored way to include physical silver in your portfolio. Silver is seen, among other benefits, as a hedge against inflation and a safe haven amid market volatility.

The coins were authorized by the Liberty Coin Act of 1985, which was signed into law by President Ronald Reagan. Each Silver American Eagle coin contains 1 oz. of 99.9% pure silver, plus small amounts of copper, and has a legal-tender face value of $1.

At the coin’s peak of production, 47 million bullion versions of the coin were minted in 2015. The Mint’s facility in West Point, New York, produces most of the Silver American Eagle coins.

You can purchase Silver American Eagles through trusted precious metals dealers like U.S. Money Reserve. Call today! Knowledgeable Account Executives are standing by to assist you.