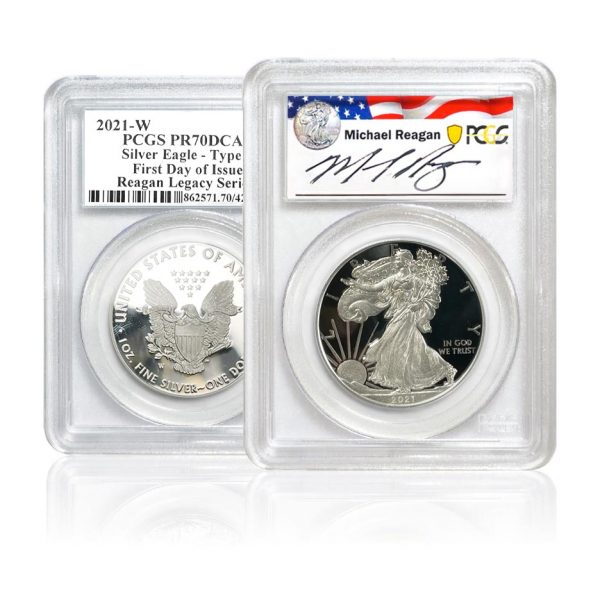 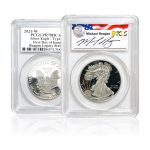 EXCLUSIVE OFFER
Since 1986, the Proof Silver American Eagle has featured one of the most popular designs ever produced by the U.S. Mint—the heraldic eagle reverse. In 2021, for the coin’s 35th anniversary, the U.S. Mint is retiring this classic design and replacing it with a brand-new reverse. This special release features some of the final 2021 Proof Silver American Eagles minted with the original design, designated as Type 1. In addition, each coin is certified museum-quality PR-70 by PCGS and sealed with an exclusive hand-signed Reagan Legacy label.

For 35 years, the Proof Silver American Eagle coin has featured the now-classic heraldic eagle design crafted by John Mercanti, 12th chief engraver of the U.S. Mint. In 2021, for the first time ever, the U.S. Mint is replacing the coin’s design with an all-new eagle reverse. As 2021 will feature releases featuring both the old and new designs, those coins struck with the heraldic eagle have been designated as Type 1, and coins struck with the new release will be designated Type 2. This release features Type 1 2021 Proof Silver American Eagle coins.

Each coin has been certified by Professional Coin Grading Service (PCGS), one of the industry’s leading third-party grading services, as Proof-70 (PR-70) condition. Coins are graded on a 70-point scale, with a 70 grade representing perfection. In addition, this coin has been certified by PCGS as First Day of Issue—a designation reserved only for coins that are received for grading by PCGS within 24 hours of their mint’s official release.

As a proof coin, the Proof Silver American Eagle features sharp, frosty devices that appear to hover over highly polished fields. In flawless PR70 condition, these coins are museum-quality pieces, free from any nicks, scratches, smudges, or other imperfections. To protect this flawless condition, each coin is sonically sealed in a protective acrylic case.

For this special release, each coin additionally features an exclusive Reagan Legacy label hand-signed by Michael Reagan, son of President Ronald Reagan. President Reagan was instrumental in the creation of the Proof Silver American Eagle, having authorized the coin’s production by signing the Liberty Coin Act in 1985.

Struck from 1 oz. of 99.9% pure silver, the Proof Silver American Eagle is official U.S. legal tender. Its creation was authorized by the U.S. Congress, and it has been government-guaranteed for weight, contents, and purity.

Proof Silver American Eagles are also notable in that they are traditionally struck in far lower mintages than their bullion counterpart. Proof Silver American Eagles are not struck for circulation. Coins certified by PCGS in museum-quality PR-70 condition can be even harder to find, as not all coins are certified with a flawless grade. Populations get even smaller when considering special designations or exclusive labels.

This special release is exclusively available from U.S. Money Reserve.

The obverse, or front of the coin, depicts one of the most beloved U.S. coin designs of all time: Adolph A. Weinman’s “Walking Liberty,” struck as the U.S. Half-Dollar from 1916 to 1947. In Weinman’s vision of Liberty, the female personification of America, draped in her nation’s flag, strides towards a rising sun. One arm is stretched out to the future, while the other carries branches of oak and laurel. On her head she wears the Phrygian or “freedom” cap, worn as a symbol of liberty during the American Revolution.

Crafted by John Mercanti, 12th Chief Engraver of the U.S. Mint, the reverse of the Proof Silver American Eagle features a powerful Heraldic Eagle design. Beneath 13 stars, an American eagle spreads its wings, guarded by a shield. In its beak it holds a banner reading E Pluribus Unum, and in its left and right talons it holds the arrows of war and an olive branch of peace, respectively. This now-classic design will be retired in 2021 and replaced with an all-new eagle design. This release marks the final time the 1 oz. Proof Silver American Eagle will feature the Heraldic Eagle design.

How Much Does the 2021 1 oz. Proof Silver American Eagle Type 1 Coin Cost?

Fortunately, this Proof Silver American Eagle comes certified by PCGS. While certified coins are still impacted by the factors listed above, they are also influenced by additional qualities such as relative scarcity and graded condition.

Where Can I Buy 2021 Type 1 Proof Silver American Eagles?

You can buy your 2021 1 oz. Proof Silver American Eagle PCGS PR-70 FDI Type 1 coins online by clicking the “Add to cart” button above, or by utilizing our Client-Connect Advantage and using the phone number below to call your U.S. Money Reserve Account Executive.

Our supply of these exclusive coins is extremely limited, so don’t wait—hurry and order yours now!