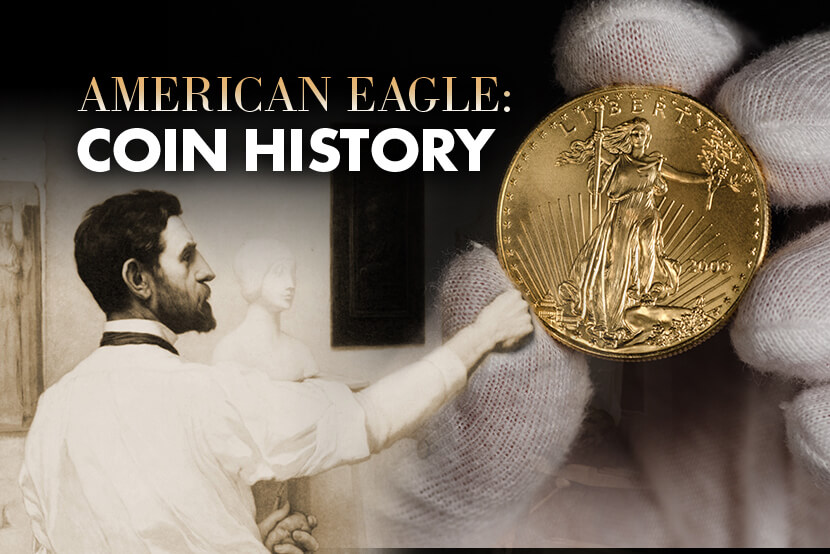 The Gold and Silver American Eagle Coin Program is one of the U.S. Mint’s most popular coin programs to date. The Mint is even required by legislation to issue enough bullion American Eagles to satisfy public demand, and in satisfying this requirement, often sells out of Proof American Eagles. So what makes American Eagle coins so popular, and how long have they been around? Discover the interesting history behind this celebrated gold and silver coin series.

Gold and Silver American Eagle coins date back to 1986. The federal Gold Bullion Act of 1985, signed into law by President Ronald Reagan, set the stage for these revered coins.

As depicted by sculptor Augustus Saint-Gaudens, Lady Liberty was chosen as the design that would grace the front of American Eagle Gold coins. The Saint-Gaudens design first appeared on the U.S. $20 (Double Eagle) gold piece in 1907, where it remained until 1933. Over the years, Gold Eagles have been minted in proof, bullion, and burnished formats.

American Eagle Silver coins also have been minted in 1986 and available in both proof, bullion, and burnished formats. They feature a rendition of sculptor Adolph A. Weinman’s Walking Liberty design, initially created for the half-dollar coin in 1916.

The U.S. Mint does not sell American Eagle bullion coins to the public. Instead, these coins must be purchased from precious metals companies like U.S. Money Reserve.

New Coin Designs on the Horizon

On October 1, 2020, the Mint unveiled new reverse (tails side) designs for select American Eagle Gold and Silver coins. The new designs—the first since 1986—will start appearing on these coins in mid-2021 but the “Mint will continue to strike and sell bullion coins that feature the original designs until the coins with the new reverse designs are released,” reports CoinWorld.

Next year marks the 35th anniversary of the American Eagle Coin Program.

CoinWorld reports the new designs issued mid-year will be featured on the following American Eagle coins:

“These beautiful designs build on the United States Mint’s heritage of artistic excellence and fortify the American Eagle Coin Program’s status as an icon in the numismatic and art worlds,” Mint Director David J. Ryder says.

The redesigned reverse side of the American Eagle Gold coin depicts a portrait of an eagle that was designed by Jennie Norris and sculpted by Renata Gordon.

“The American eagle is such a noble bird. I was hoping to capture the intensity of his stare through the close cropping. His gaze speaks of pride and wisdom passed down through generations of time,” Norris says.

The redesigned reverse side of the American Eagle Silver coin depicts a single eagle coming in for a landing, carrying an oak branch as if to add it to a nest. Emily Damstra created the design, which was sculpted by Michael Gaudioso.

“My inspiration for this design grew from a desire to show our national bird—with all of the values it embodies—in a unique way that could also convey traits such as diligence, cooperation, care, and protection,” Damstra says.

The obverse (heads side) of the redesigned American Eagle Gold and Silver coins will continue to bear versions of the designs that have been featured on these coins for more than three decades, the Mint explains. However, the Mint adds, both coins will display “refreshed” obverse designs (the Saint-Gaudens design for the gold coin and the Weinman design for the silver coin).

American Eagle coins have new designs on their way, so make sure your portfolio includes current American Eagles before they’re gone! Order online or call U.S. Money Reserve to complete your purchase today.