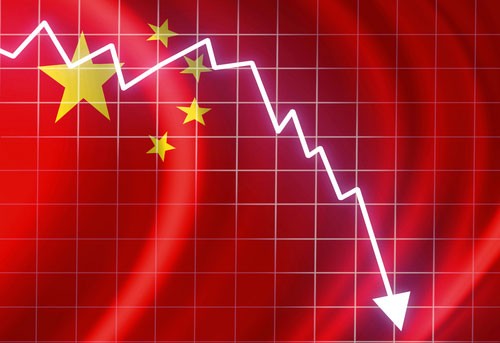 China's volatile shares tumbled again on Thursday, taking losses this month to about 25 percent or 13 trillion yuan ($2 trillion), while state media insisted that the market ructions did not reflect the real economy.

The benchmark Shanghai Composite Index ended down 2.9 percent, and the CSI300 index of the largest listed companies in Shanghai and Shenzhen shed 2.6 percent, both indexes having tumbled this week to levels not seen since 2014.

Trading was very light, as many investors have given up on Chinese stocks, burnt by last summer's 40 percent crash and a hair-raising January that has taken indexes back to late 2014 levels.

“The majority of equity investors we met over a four-day marketing trip in ASEAN last week had trimmed exposure to China equities by varying degrees and were waiting for signs of stabilisation for potential re-entry,” said Japanese broker Nomura.

January began with sharp falls in Chinese stocks and a depreciation in the yuan currency, and the sell-off hasn't abated as economic data confirmed slowing growth and deteriorating business conditions.

As the markets keep falling, the prospect of investors being forced to sell stocks bought with borrowed money to cover margin calls has hurt sentiment further.

“Margin calls and delveraging is being talked about more and more in a market extremely bearish about China's economy and the yuan's value,” said Wang Yu, analyst at Pacific Securities.

China's woes and plummeting oil prices have damaged risk appetite across the world's financial markets, and are complicating the policy calculations of leading central banks.

The U.S. Federal Reserve left interest rates unchanged late on Wednesday and said it was keeping a wary eye on global markets and their impact on the labour market and inflation, but didn't signal it was ready to abandon its plan to tighten monetary policy this year.

It raised interest rates in December for the first time in almost a decade, and the prospect of more hikes has given the People's Bank of China (PBOC) an unenviable task of finding a level for the yuan that slows capital outflows without punishing the country's struggling exporters.

An editorial on Thursday in the People's Daily, the official mouthpiece of China's Communist Party, laid in to “groundless fears” about the economy, which it said was still propelling global growth, and enjoying rising foreign investment, moderate inflation and prudent monetary policy.

Market volatility, it said, was not a reflection of the economy but rather showed that the market, regulatory environment and investors still needed to mature.

Nomura said equity investors' top concern was the possibility of a one-off 10-15 percent devaluation of the yuan, though the PBOC has kept the currency's daily midpoint fixing little changed since spooking the markets with a sharply weaker fix in early January.

That was the second time in six months that the bank allowed a sharp slide in the currency, which has depreciated more than 5 percent over the past year, only to step in aggressively to stabilise it and deter speculation.

Spot yuan was at 6.5772 on Thursday, having hardly budged from Wednesday's close, while offshore it had firmed a little to 6.6129, a 0.5 percent discount to the onshore rate.

State media have warned investors including billionaire George Soros, dubbed “the man who broke the bank of England” for betting against sterling in 1992, not to speculate against the currency.

The central bank has been making ample liquidity available to the banking system to avoid any cash squeeze ahead of long Lunar New Year celebrations beginning in early February.

But those funds are largely short term, and the big injections may have dashed some investors' hopes that the PBOC would cut banks' reserve requirements (RRR) soon to free up more money for longer-term lending which could boost economic activity.

The decline in the yuan and concerns about growth have fuelled a flight of capital out of the world's second-largest economy which policymakers are struggling to contain.