The Metals & Meanings Behind 7 Military Medals 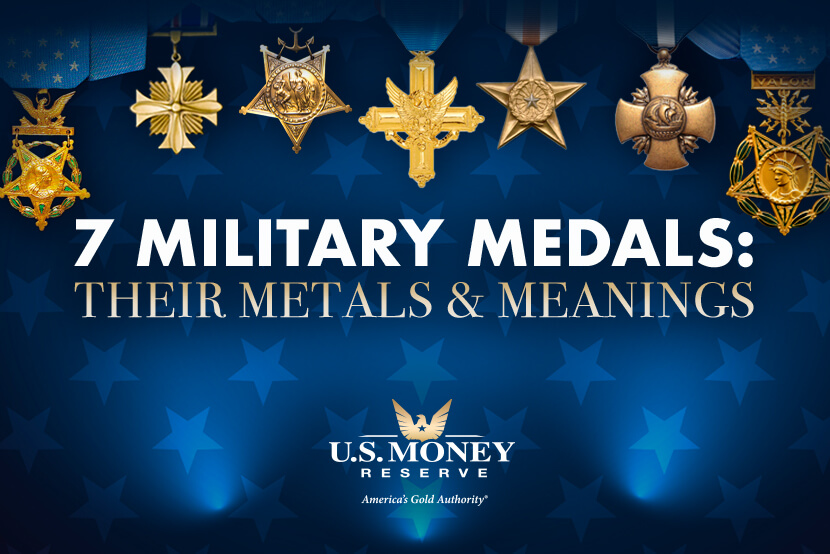 Is a Bronze Star really bronze? Is a Silver Star really silver? The precious metals content and meaning behind many of America’s military medals and awards might surprise you.

“Few inventions could be more happily calculated to diffuse the knowledge and preserve the memory of illustrious characters and splendid events than medals,” Col. David Humphreys, who served in the Revolutionary War, wrote in 1787.

Here, we highlight seven of today’s most important military medals and their meanings—medals that every patriotic American should feel empowered to recognize and honor.

The Bronze Star is, appropriately, made of bronze.

Dating back to World War II, the Bronze Star is awarded to members of all branches of the U.S. military, according to the Hall of Valor Project. It’s given either for meritorious service or combat action. Civilians also are eligible to receive the Bronze Star.

This medal is a five-point star with a laurel wreath in the body of a gold star and a smaller star in the center. Even though this medal is called the Silver Star, it’s actually made primarily of gold.

Originating in 1918, the Silver Star is the third-highest military combat decoration that can be awarded to a member of the U.S. Armed Forces.

The metal content of the Medal of Honor varies.

The Medal of Honor, sometimes called the Congressional Medal of Honor, is the highest military decoration that can be bestowed upon anyone. It’s “awarded to soldiers who risk their own lives and go above and beyond the call of duty while engaged with an enemy of the United States,” according to the Pearl Harbor Visitors Bureau.

The U.S. president hands out this award, which was introduced in December 1861. It initially went to members of the Navy, with the Army adding the distinction in 1862 and the Air Force (and Marines and Coast Guard) in 1965.

In March 2020, Hershel “Woody” Williams, the last surviving Medal of Honor recipient from the Battle of Iwo Jima, witnessed the commissioning of a naval ship that’s named in his honor.

This award’s heart-shaped medallion is gold in color, but it’s actually made of copper and zinc.

Decades and decades later, Gen. Douglas MacArthur repositioned the Purple Heart as an award for those wounded or killed in combat while fighting an enemy.

The Distinguished Service Cross, Navy Cross, and Air Force Cross are made of bronze.

The three crosses represent the second-highest military medal for valor, just behind the Medal of Honor. The crosses honor “extraordinary heroism” demonstrated while in combat with an enemy.

One way to honor the legacy of American heroes is by raising awareness for their sacrifices. U.S. Money Reserve’s Gold and Silver Iwo Jima 75th anniversary coins do just that. Secure yours today.