Our Gold & Silver Price Forecast for the Remainder of 2019 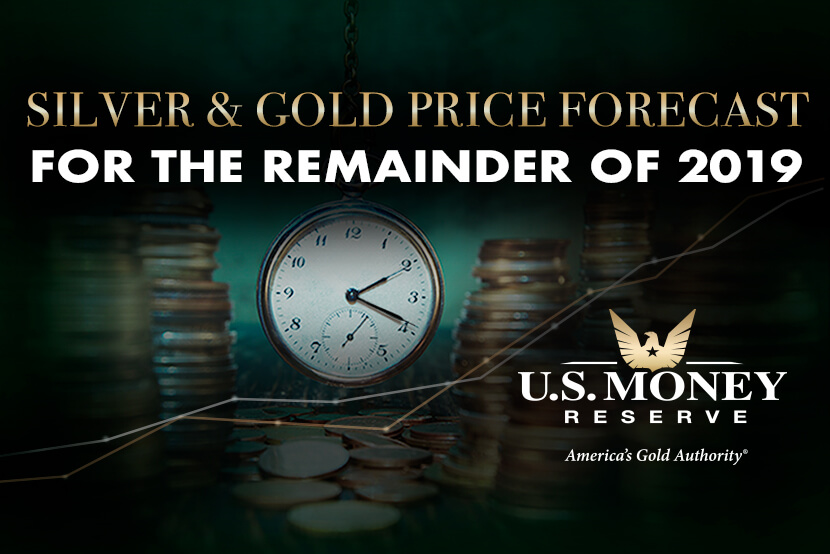 Gold checked in as a top-performing asset in the first half of 2019, according to the World Gold Council. But what does this store of wealth have in store for the rest of the year?

And what about silver, which sometimes seems like it’s hiding in gold’s shadow? How will it fare in the second half of 2019?

The prices of both of these precious metals are predicted to climb throughout the remainder of 2019, some analysts say, as U.S. and European interest rates appear to be ticking downward and global political and trade tensions are looming.

We've gathered the top insights from industry leaders to help you fully understand market movements in the months to come. It’s up to you to decide: Will gold prices peak? Will silver price predictions become price realities?

Some analysts predict gold prices of $2,000 per ounce.

Germany’s Commerzbank predicts the price of gold will jump to $1,500 per ounce by the end of this year, up from around $1,400 per ounce in early July.

David Roche, president and global strategist at London-based Independent Strategy, is even more bullish with his gold predictions. He foresees gold prices soaring to a record-busting $2,000 per ounce by the end of 2019, according to CNBC.

“Even if some short-term setbacks cannot be ruled out following the recent steep price rise, the environment for gold remains positive,” Commerzbank says. “The still-low interest rates and numerous political risks are likely to generate further investment demand and thus counterbalance the weaker physical demand in Asia.”

In July, Evy Hambro, global head of thematic and sector investing at global investment manager BlackRock, told Bloomberg TV that gold prices “should remain well supported” in the near term.

Hambro cited the continued trend of gold buying among central banks as one of the reasons for that assessment.

Another, he said, is that gold offers a “safe place” for individuals to put capital as lower interest rates chip away at returns on cash. In that environment, the competitiveness of gold becomes “much, much better,” Hambro said.

Jonathan Barratt, chief investment officer at financial services provider Probis Securities, told Bloomberg TV that he thinks the outlook for gold is “very bullish,” based on the technical merits of the precious metal.

“Having gold in your portfolio is a great thing,” Barratt said.

In a new forecast, the Council says it expects demand for gold to “remain robust” among asset holders throughout the rest of 2019—and it anticipates central banks will maintain their torrid gold-purchasing pace.

“Gold is finally gaining the traction needed to boost prices to a level not seen since 2013 as concern mounts over increased trade war tensions and the global growth outlook,” the Bloomberg news service reported in June.

Forecasters anticipate silver prices as high as $16.50 per ounce

What about the silver market forecast? While gold garners considerable buzz, silver is an asset that can't be overlooked, particularly since Commerzbank forecasts silver will reach $16.50 per ounce by the end of 2019. That’s up from around $15 per ounce in early July. Capital Economics foresees a more modest increase in silver prices, landing at $16 per ounce by the end of this year.

According to BMO Global Commodities Research, demand for silver has picked up as the metal’s inflow into ETFs has grown over the past year, Kitco News reported.

“If the price of gold continues to increase, it may only be a matter of time before the silver market catches bullish fire,” commodities and futures trader Andrew Hecht wrote in July.