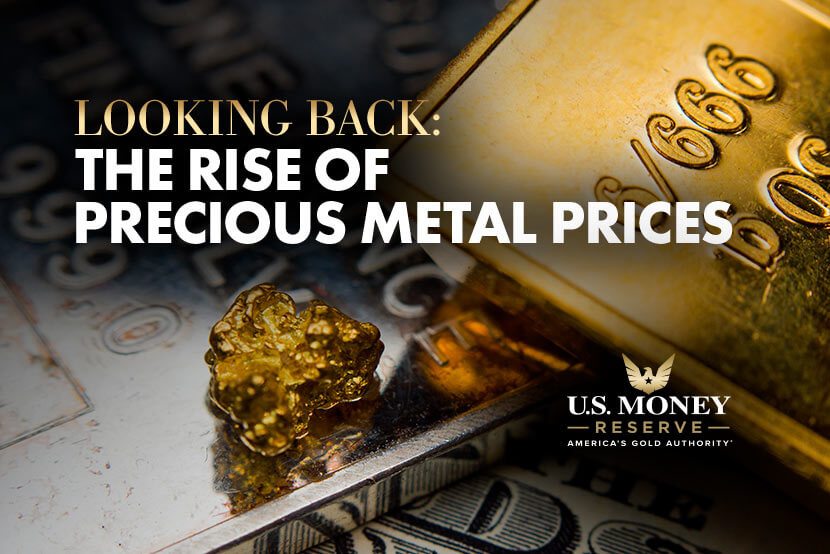 Looking Back: The Rise of Precious Metals Prices

Although each precious metal has experienced peaks and valleys, all four—gold, silver, platinum, and palladium—are trading at much higher prices than they were 20 years ago. We’ve covered the 20-year history of gold prices. Now, we dig into the three other precious metals by exploring their 20-year price histories and the paths forward for silver, platinum, and palladium.

Since 2001, the highest one-day price of silver was $49.21/oz. on April 29, 2011. The spike happened because of heightened demand from asset holders, prompted in large part by concerns over inflation and geopolitical turbulence.

Other factors that may affect the price of silver include:

“The [price] of silver is strongly driven by the laws of supply and demand,” according to Capital.com. “Its ties to the U.S. dollar can also create additional volatility for the commodity. A strong dollar pushes the price of silver lower, which is a good opportunity to buy in.”

Some experts believe the bull market for silver began in 2001. The price of silver started taking off that year thanks to uncertainty about the economy and the growing demand for silver in the manufacturing of solar panels.

What follows is a year-by-year look at the average price of silver per ounce:

What does the future hold for silver prices?

Keith Neumeyer, CEO of First Majestic Silver, told Kitco News in May 2021 that he believes the price of silver could break the $100/oz. mark in the future. Such a considerable uptick means owners of silver could see a significant gain in the performance of their holdings.

In spring 2008, the price of platinum pushed toward $2,250/oz.—its highest level over the past 20 years. Within six months, however, the price bottomed out at close to $777/oz. The price fluctuated so much during that time because of the volatility of platinum mining in South Africa, by far the world’s biggest producer of platinum.

Since then, the price of platinum has seen smaller swings. In September 2021, the price of platinum hovered around $960/oz. The impact of the COVID-19 pandemic caused the price to drop in 2020 and stay relatively low for several months, but pricing has picked up considerably in the meantime. Prices have remained below $1,000/oz. partly because of a chip shortage in auto manufacturing; platinum is a key component of catalytic converters for vehicles.

Looking ahead, some analysts are bullish on platinum prices. In fact, TD Securities envisions the price surging to $1,375/oz. in 2022. It attributes that forecast to expectations of the pandemic subsiding, chips becoming more available to automakers, government spending continuing to grow, and China’s economy maintaining its robust pace. For similar reasons, Credit Suisse foresees the price of platinum crossing the $1,500/oz. threshold.

And did you know? Philip Diehl, president of U.S. Money Reserve, helped spur greater interest in platinum during his tenure as 35th director of the U.S. Mint. How? Diehl launched the first platinum coin ever minted by the U.S. government.

As pointed out by Capital.com, the price of palladium has soared nearly 400% since 2016, outperforming gold, silver, and platinum during the same period.

While the price saw extreme dips in 2003 (down to around $150/oz.) and 2009 (down to around $160/oz.), palladium has enjoyed a largely upward trajectory since then. In 2003 and 2009, palladium suffered from weaker demand among large-scale users, such as the automotive (pollution-reducing catalytic converters), dental, and electronics sectors.

In September 2021, the price of palladium exceeded $2,100/oz., down from an all-time high of a little over $3,017/oz. five months earlier. As such, it reigns as the priciest of the four precious metals.

“Supply has lagged [behind] demand for almost a decade. Usage is increasing as governments, especially China’s, tighten regulations to crack down on pollution from vehicles, forcing automakers to increase the amount of precious metal they consume,” reports the Bloomberg news service.

Continued demand amid the ongoing supply shortage should keep palladium prices reasonably high, experts say, although a recent chip shortage in the automotive industry has depressed the price of palladium. Until the supply increases or demand wanes, palladium prices should stay elevated, according to market observers.

In a recent poll by the Reuters news service, analysts and traders predicted the average price of palladium would be $2,552/oz. this year and $2,450/oz. in 2022.

So which precious metal should you buy? For many people, the answer is all of them. Download our free Gold Kit to learn how precious metals can all work together for your financial benefit.