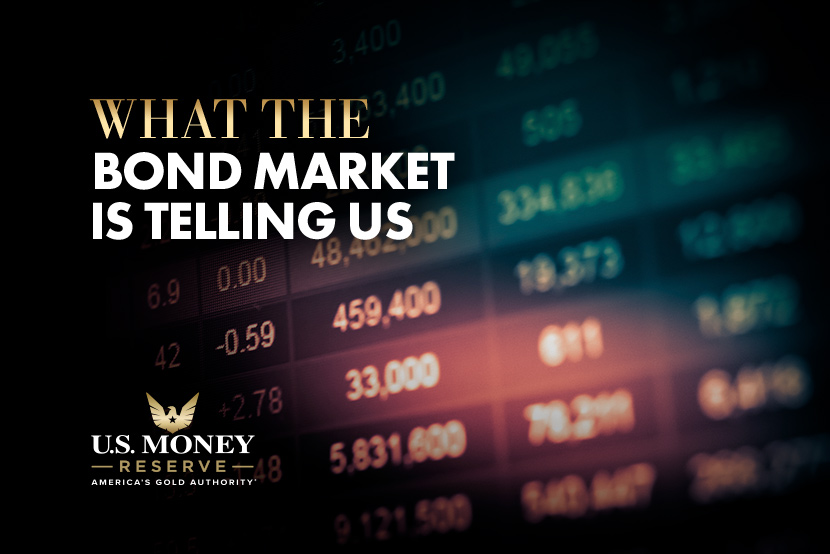 Is a Market Crash Coming? What the Bond Market Is Telling Us.

There have been recent discussions about the sell-off of U.S. bonds and what the bond market is telling us about the potential of a major crash ahead for the American economy. Is this business as usual? Is it a sign that the bottom is about to drop out? Or is it something in between?

Given the rise in inflation and the current rate of bonds being sold, it might be easy to assume a major economic crash is inevitable. But like most things, the market is more complicated than that. Before throwing our hands in the air and accepting that a crash is inevitable, let’s look deeper at the what the bond market is actually telling us about the economy.

What Is Happening with Bonds and Inflation?

The Federal Reserve is also responsible for the safety and soundness of financial institutions. It regulates them and acts as the lender of last resort if there’s no other way to help them. Over the last few years, we’ve seen the Fed attempt to use its powers to steer the financial system through the turbulent waters of:

The Federal Reserve has always owned U.S. bonds, which it uses to help regulate and stabilize the economy. When it wants to put more cash into the economy, the central bank will buy back U.S. bonds from financial institutions, companies, and individuals in a strategy called “quantitative easing.” This strategy is sometimes referred to as the Federal Reserve “printing money.”

We saw a spike in quantitative easing during the COVID-19 pandemic, as well as during the Great Recession. By buying billions of dollars in U.S. bonds every month from financial institutions, the central bank injected liquidity into the financial markets from March 2020 to March 2022. Correspondingly, M2 (a measure of money supply) skyrocketed 39%—from $16 trillion to $21.9 trillion, the largest jump in history as well as the highest number of U.S. dollars in history. But with the faster than expected rise in inflation, the Fed has ended its policy of quantitative easing, paring down its U.S. bond holdings and raising interest rates to start taking excess money out of our financial system.

U.S. Bond Holdings Are Being Sold to Inject Liquidity Into the Economy.

Right now, a number of foreign countries, U.S. financial institutions, and individuals are selling their U.S. bond holdings. Many analysts attribute this to fears over the U.S. economy and a belief by some (tech companies in particular) that the stock market will have a drastic correction. Although there’s some truth to these assumptions, the issue is more complicated.

Foreign countries’ central banks are selling U.S. bonds to get cash. Most want to boost their finances as they try to help their economies recover from the economic impact of the COVID-19 pandemic, so they are using that cash to boost their weak currencies and fund their government’s fiscal stimulus spending. This shows that the international community has changed their tactics in how they use U.S. bonds to help their own economies. But the sell-offs are more tempered than they initially come across. For example, Japan sold $60 billion in U.S. bond holdings, which seems like a staggering number. But when you compare that number with the $1.3 trillion they still own, $60 billion looks less like a panicked reaction and more like a strategic maneuver to help support their economy or buy stocks “on the dip.”

U.S. financial institutions and other large financial firms are also paring down their U.S. bond portfolios because they, too, want more cash to buy the dip as the stock market goes down. This puts the Federal Reserve in a position where it must buy back more U.S. bonds—the volume of bonds sold by such financial institutions is large enough to destabilize the market for U.S. Treasurys, so the Fed has stepped in to pick up the slack. However, it will most likely balance out in the long run between low-yield and high-yield bonds—as rising returns accelerate the selling of low-yield U.S. bonds, they also accelerate the buying of higher-yield U.S. bonds.

At the beginning of the COVID-19 pandemic, the Federal Reserve used quantitative easing (buying up bonds) to stimulate the economy. For an economy that ground to a halt overnight, this was seen as an essential stabilizing action. However, because of excess cash in the economy, supply lagging, and high demand, inflation began to rise quickly.

In order to curb inflation, the Federal Reserve is now enacting a policy of quantitative tightening (QT)—selling bonds and raising interest rates to remove excess cash from the economy. This policy is meant to dampen demand so supply can catch up, thus bringing balance and slowing inflation.

For many economists, this is not a surprise. But it still makes them uncomfortable since it’s essentially a different way for the Federal Reserve to loan large amounts of money to banks and other large institutions.

Is The Federal Reserve Really Loaning Banks $1.6 Trillion Per Week?

The short answer is yes. The Federal Reserve is essentially loaning banks and other institutions $1.6 trillion per week by buying back U.S. bonds. This is extraordinary and would certainly put the economy into a tailspin if banks and institutions ever defaulted on these loans.

The long-term effects of this strategy are yet to be seen, but it’s important to remember that every loan ever issued by the Federal Reserve since its creation has been paid back in full. That includes loans given during the Great Recession.

So What Is the Bond Market Outlook?

Something must be done to tamp down on inflation. For the federal government, this may include new or updated federal spending, taxing, and/or regulatory policies. In addition to raising interest rates, the Federal Reserve can be expected to pull the bond buy-back lever.

Some financial institutions and individuals will continue to sell bonds to build up cash they may then use to buy the dip in the stock market. The bond market is telling us something we already know: Inflation is a problem, and the Federal Reserve is using all of its tools to fight it.

The question is not whether quantitative tightening will become the Fed’s bond market strategy. It’s how long will they have to use QT and how effective will it be.

Bond prices and inflation risk go hand in hand. But they can affect each other differently in the near term and the long term.

The Federal Reserve’s two main tools are raising interest rates and selling bond holdings to curb inflation. So far this year, we’ve seen the Fed use both tools to try to slow rising inflation.

We’re already experiencing near-term inflation, so the real question is whether or not the new strategy the Fed is applying to the U.S. bond market will alleviate long-term inflation.

The question of long-term inflation is dependent on what happens to the economy as a whole over the next few years. Will we enter a recession, and if so, how will that recession play out?

But regardless of the exact rate of inflation, the U.S. dollar has historically lost its purchasing power over time. This means that some long-term inflation will likely remain a constant in our lives. It’s official government policy to have inflation, and the Federal Reserve’s goal is to maintain 2% inflation, which it considers to be a sign of a healthy economy—one where demand exceeds supply but just by enough to drive economic growth.

As we’ve seen historically, some long-term inflation is likely no matter what happens. The bigger question is whether or not we are heading into a recession.

Are We Headed for a Recession?

Given what we’re seeing, I believe that the likelihood of a recession is very high. That doesn’t mean, however, that we should expect it to look like past recessions. A stock market crash like Black Friday, as well as a depression, is unlikely. The probability of runaway inflation is also unlikely. You may have heard of the hyperinflation happening in Venezuela, where inflation hit a recent high of 344.509% per month. This is an extreme example—hyperinflation is defined as 50% per month. For context, the United States is currently experiencing an inflation rate of around 9% per month.

The question isn’t whether we’ll have a recession, but instead, will it be deep (unlikely but possible), long (likely), and a hard or soft landing when it’s done (I think somewhere in between).

Is Gold a Hedge Against Inflation?

You may be wondering, what can I do to protect my wealth right now? As stocks, cash, and cryptocurrencies have taken hits this year, gold has not decreased by nearly as much. Overall, despite huge losses by other assets, gold has retained its relatively high purchasing power.

Historically, gold has performed well despite recessions and volatile markets. This is why many see purchasing gold and other precious metals as a hedge against inflation.

In light of what the bond market is telling us about inflation and the probable recession soon to come, you may want to speak with a dedicated U.S. Money Reserve Account Executive and consider gold for your personal portfolio or retirement portfolio in the form of a precious metals IRA.

If you are ready to buy now, request a free Gold Information Kit.