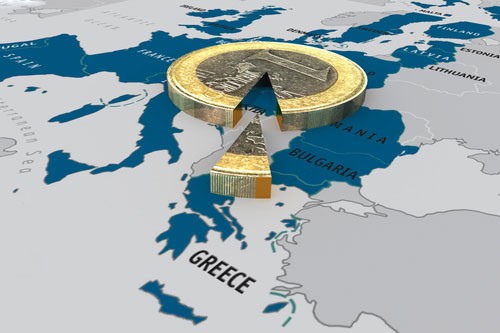 It was more or less impossible for Greek banks to open on Monday, once the European Central Bank announced it was turning off emergency lending to them.

Because in the absence of any increase in this so called Emergency Liquidity Assistance, the banks had no way to supply cash to Greek depositors who have been anxiously withdrawing their savings.

And, to state the obvious, banks that run out of cash are kaput.

So for banks to re-open, restrictions – known as capital controls – have to be put in place on the amount depositors can take out.

When these restrictions are announced, Greece will be half a step nearer to exit from the euro – since a core rule of the eurozone is that there should be no restrictions on the movement of money or capital.

But tumbling out of the euro would not be inevitable – as Cyprus shows: the Cypriot government introduced limits on how much cash could be taken out of banks in 2013, and has since taken steps to mend its finances while remaining in the euro.

The temporary closure of banks in Greece, and the expected introduction of capital controls, is however very bad news for Greece: Greek people will have less money to spend and business less to invest; so an already weak economy will probably return to deep recession.

As for the impact on the rest of the eurozone, corporate treasurers and wealthy individuals will wake up on Monday wondering if their money is safe in the banks of other weaker eurozone economies.

So in the coming weeks and months, capital may seep out of the likes of Portugal, Spain and Italy – at potentially significant long term cost to those economies.

Greek banking sources tell me that the banks have been instructed to close for at least a week and a day.

And during that period of closure the following capital controls will be imposed:

a) a maximum of 60 euros can be withdrawn per bank card per day or per account per day;

b) no cash can be moved abroad at all, except for vital commercial transactions that would have to be pre-approved.

The hope would be that banks could open their doors again some time after the result of the referendum is known next Sunday night, probably the Tuesday – so long as Greeks vote for a bailout on the terms demanded by the country's eurozone and IMF creditors.

But European finance ministers and the IMF have not guaranteed that the deal will still be available. So it is possible the emergency bank closures will continue beyond the current signaled end of next Monday night.