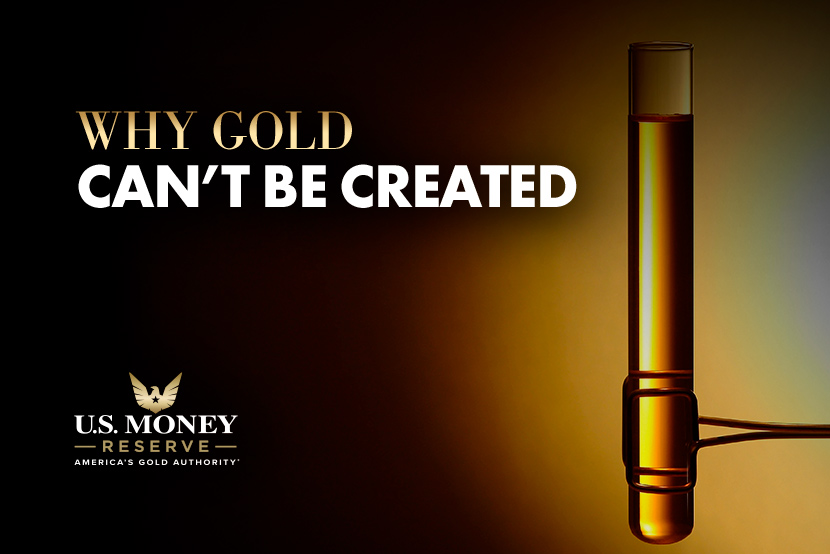 Why Gold Can’t Be Created

The U.S. government is a money-making machine. For the 2020 budget year, the U.S. government ordered the printing of nearly $146 billion in paper currency—a total of 5.2 billion notes ranging from $1 to $100 each.

The bottom line: Governments worldwide may print money, but none of them actually manufactures raw, physical gold.

Can Gold Be Created?

Technically, yes—gold can be created. But the effort required to make it isn’t worthwhile.

According to Christopher Baird, an assistant professor of physics at West Texas A&M University, gold—a chemical element—can be created from other elements. However, the process requires nuclear reactions and is so expensive that no one would profit from creating gold this way.

Instead, all of the gold we buy and sell occurs naturally. (Though gold can also be recycled—mostly from jewelry.)

The American Museum of Natural History explains that gold may show up as deposits in fractured rocks known as lodes or veins. Gold also can be found in the earth’s crust.

According to ThoughtCo, all of the gold found on Earth came from the debris of dead stars.

“The considerable energy required to make gold only occurs when stars explode in a supernova or when neutron stars collide,” ThoughtCo says.

Diamonds used to be similar to gold in that only a limited supply of gems could be found in the earth. Today, though, diamonds are frequently made in labs. The same can’t be said for gold; a finite amount of gold is available to be mined, but it isn’t created in labs.

For Comparison, How Is Cash Produced?

While the U.S. Mint produces coins from gold and other metals, the U.S. Bureau of Engraving and Printing produces paper currency at two facilities: one in Washington, D.C., and another in Fort Worth, Texas.

The Wonderopolis website explains that U.S. currency is printed on special paper manufactured by Crane & Co. paper company. This paper is made of 75% cotton and 25% linen. The Bureau’s presses churn out billions of bills every year.

It’s the responsibility of the seven-member Federal Reserve System Board of Governors—which controls the country’s supply of money—to ensure that enough cash is in circulation to meet U.S. and international demand. The Federal Reserve decides how much cash will be printed in a given year. As of December 2020, a little over $2 trillion in U.S. paper currency was in circulation.

It’s worth noting that although gold can be bought and stored, it’s typically not used as a payment method like cash. However, it can be converted to cash in almost any currency.

If you want to put more of your cash into gold, an asset that can’t be created out of thin air, then call U.S. Money Reserve. We specialize in stocking legal-tender gold products that are government-backed for their gold content, weight, and purity.