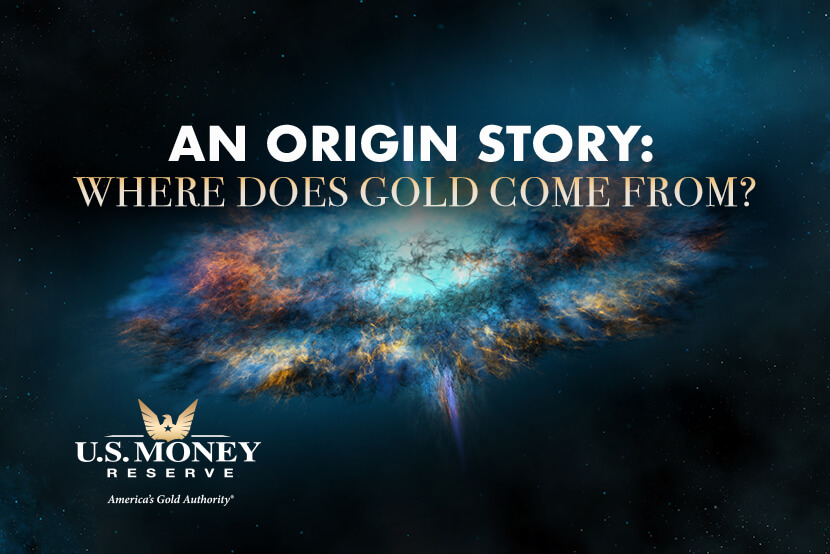 Where Does Gold Come From?

A rare and precious material crashes onto our planet from the far reaches of space. Its beauty inspires artists and leaders of nations alike, and millions of people hold on to it for generations.

It sounds like the plot of a summer blockbuster, right? But it isn’t. What we’re talking about here is physical gold.

Have you ever wondered what led to that meteoric crash? What happened immediately afterward? Where does gold come from?

One Theory of How Gold Came to Be

Here’s the presumed process behind the prevailing theory about gold’s origins:

The reason you’re not tripping over all of this meteor-deposited gold? Molten iron on the Earth’s surface sank inward to become our planet’s core, taking much of the planet’s precious metals—such as gold—with it.

Another theory suggests that the precious metal formed following a collision between two neutron stars.

According to NASA, a neutron star forms “[w]hen the core of a massive star undergoes gravitational collapse at the end of its life.” The result is a city-sized sphere so dense that it includes the solar mass of 1.3 to 2.5 solar bodies. “Matter is packed so tightly that a sugar-cube-sized amount of material would weigh more than 1 billion tons….”

With all this talk of space, you might ask yourself: Is there gold in space? The answer may surprise you.

More recently, NASA identified a giant asteroid—located between Mars and Jupiter—that contains enough gold and other metals to make everyone on Earth a multibillionaire.

Where Does Gold Come from in the World?

Since we cannot drill down to the planet’s core to access gold deposits—or hop aboard a spaceship (at least in the near future)—what’s the next best way to collect gold?

Mining, of course. Just not so deep.

The world’s most notable gold mines include those in:

Don’t let the word “prolific” in the video throw you. Some analysts argue that the world’s mineable reserves of gold could run out by 2035—and may have already hit their peak last year.

Fortunately, enough gold remains for those who want it—for now.

The Source of Gold

You know where your food comes from, how it’s grown, and how it makes its way onto your plate. You probably also know how your house came to be built from raw materials into a comfortable space you love.

Now you know where gold comes from. Finding “gold near you” is as easy as shopping the U.S. Money Reserve catalog online or calling 1-844-307-1589.