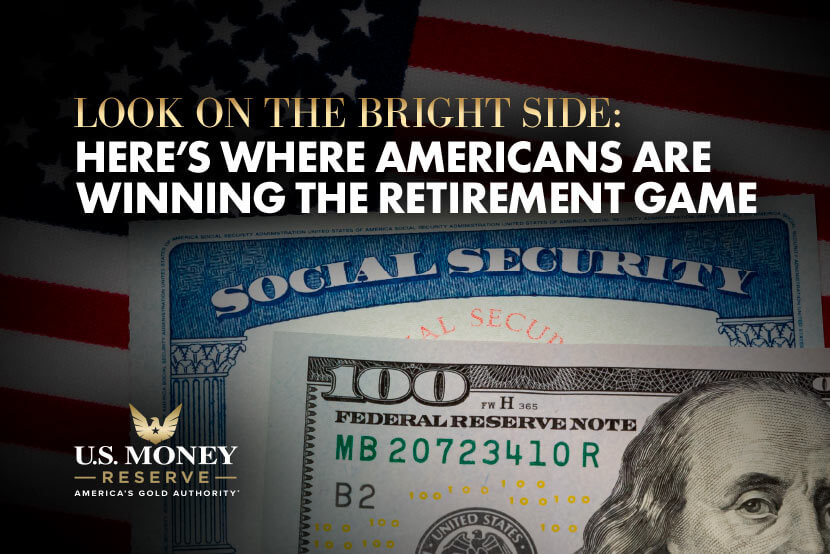 Look on the Bright Side: Here’s Where Americans Are Winning the Retirement Game.

You’ve probably heard that Americans on the whole aren’t saving enough for retirement. And while that may be true in general, plenty of folks are smartly setting aside money for the future.

Here’s a look at the bright side of retirement in America.

If you’re one of the people who have retirement savings, pat yourself on the back. But be sure to regularly review your retirement allocations to see whether they need to be adjusted.

Millennials Are Better at Retirement Savings Than You Might Think.

Citing the 2021 Planning & Progress Study from Northwestern Mutual, CNBC says millennials (25 to 40 years old) have an average retirement balance of $63,300. Gen Xers (41 to 56) are ahead of millennials in that category, but not by as much as you might imagine. The study indicates that Gen Xers have $98,900 put away for retirement.

Yes, that represents a gap of $35,600. Yet it would seem that Gen Xers, who are much closer to retirement, should be much further ahead of their millennial counterparts in terms of retirement savings.

No matter your age, it’s wise to continually assess your retirement savings and where you want to be.

Despite the challenges presented by the COVID-19 pandemic, younger Americans appear to be as committed as ever—and perhaps even more determined—to saving for retirement.

Reporting on a 2021 survey by the Transamerica Center for Retirement Studies, Forbes notes that more than 80% of Americans saved for retirement during the pandemic. Participation was especially strong among millennials and members of Generation Z. In particular, the survey found that members of Generation Z begin saving early for retirement—at age 19.

“People are doing an admirable job,” Catherine Collinson, president and CEO of the Transamerica Center for Retirement Studies, told Forbes. “With everything that they’ve had to face, it’s very impressive people are still planning about their future.”

Unfortunately, time isn’t always on your side when it comes to setting aside money for retirement. No matter your age, you’re better off doubling down on retirement savings sooner rather than later.

American workers who are approaching retirement look at IRAs as a way to exercise more control over their retirement assets.

In a survey conducted earlier this year by Pew Charitable Trusts, 63% of near-retirement workers cite greater control over their retirement assets as the biggest motivator for rolling their workplace savings into an IRA.

In the same survey, 54% of retirees report leaving money in their workplace retirement plans, and 46% report rolling their savings into an IRA. (Retirees in the survey could choose more than one option). One fifth of the retirees say their number-one motivator for rolling their savings into an IRA is gaining additional control over their retirement assets.

For Americans of any age, traditional and Roth IRAs—including self-directed IRAs that allow holding alternative assets like precious metals—can be an enticing avenue for strengthening control over retirement savings.

If you’re one of the people who feel financially ready for retirement, congratulate yourself. Do what you can to pass on your knowledge to future generations. And if you’re not so sure about your financial future in retirement, get started now. It’s never too late to start. Call U.S. Money Reserve to learn how a gold IRA could help achieve your retirement goals.