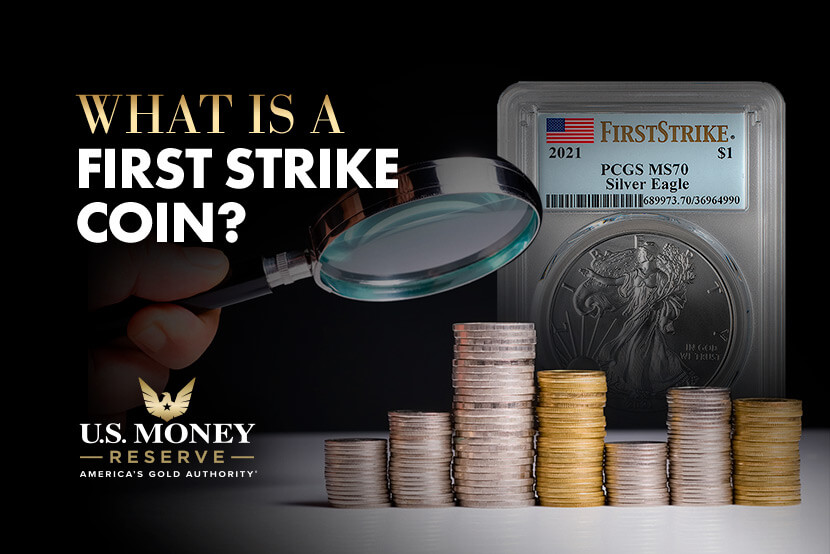 When shopping for new gold and silver coins to further diversify a precious metals portfolio, you might encounter the term “First Strike.” But what is a First Strike coin? Professional Coin Grading Service (PCGS), one of the world’s top third-party coin certification companies, generally uses this term as a special designation for new coins received for grading and certification within 30 days of the coin being released by the U.S. Mint.

The U.S. Mint does not itself designate coins as First Strike or Early/First Releases, nor does it track the minting order of its coins.

What Are the Benefits of a First Strike Coin?

First Strike coins benefit from being certified by an independent third party as authentic, expertly graded for their condition and luster, and protected by a sonically sealed, tamper-proof display holder. PCGS says the First Strike designation gives modern coins an increased appeal, and such coins are often in high demand.

For instance, a 2019-S Enhanced Proof Silver American Eagle released by the U.S. Mint originally sold for $65.95. The coin later reportedly fetched $14,001 at auction, according to Coin World. Ten bidders placed a total of 36 bids for the coin, which had been certified by PCGS.

Coin grading services rely on the 70-point, internationally accepted Sheldon Coin Grading Scale. The Sheldon Scale ranges from 1 to 70, and the final score indicates a coin’s condition and quality. The higher the grade, the better the condition of the coin (and often, the higher the coin’s price).

In this context, it’s important to know the difference between a mint state coin and a proof coin. Mint state coins are graded, while proof coins may or may not be graded. “Mint State” refers to a coin’s grade, whereas “proof” can refer to a coin’s manufacturing method, finish, type, quality, or graded condition.

What types of coins are designated as First Strike coins?

According to A Guide Book of United States Coins, certain types of U.S. coins are labeled “First Strike” more often than others. Among them are:

In terms of pricing, A Guide Book of United States Coins says the best-performing First Strike coins have been:

Where to Buy First Strike Coins

Call U.S. Money Reserve today for special pricing on First Strike gold and silver coins and to learn more about this unique designation. Many of our government-issued First Strike coins are available online, with many more options available over the phone. Even if you’re not ready to make a purchase, speaking with a knowledgeable Account Executive is one of the best ways to improve your precious metals knowledge.