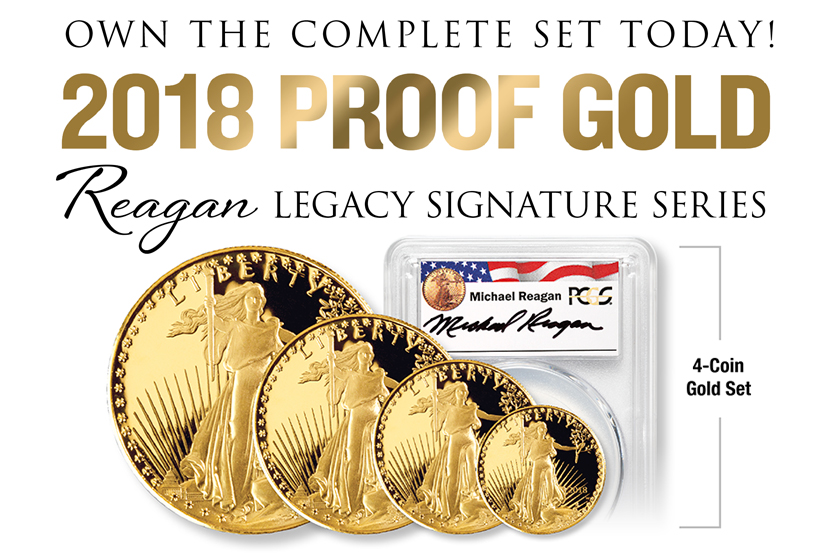 Rising global tensions. Looming trade wars. Market panic attacks! If there were ever a time to worry about your long-term financial security, the time is now. Experts anticipate gold prices in 2018 to top $1,400, if not $1,500 an ounce, due to geopolitical turbulence, supply constraints, and other factors. To help you prepare for what's ahead, we've released our 2018 Proof American Eagle Gold Coin earlier than ever before. Learn more about one of the most beautiful gold coins in the world and how you can buy this year's Proof American Eagle Gold Coin before it's gone.

Select Proof American Eagles are encapsulated and sonically sealed in impact-resistant, tamper-proof plastic cases by a third-party grading service to protect their condition and design.

If you already own the bullion version of the Gold American Eagle, you may be wondering if it's worth your time and money to buy Proof Gold American Eagles. Apart from the packaging and sheen, is there really a big difference between the two coins? The answer is a resounding, yes.

Proof Gold American Eagles are more than beautiful gold coins. They can work as a powerful means of wealth preservation, too.

When compared to bullion coins, certified proof gold coins can provide precious metals owners a way to minimize risk and maximize reward over a longer period of time. Unlike bullion coins, these proof coins are evaluated and graded for their condition and rarity by a third-party grading service, like Professional Coin Grading Service (PCGS). The higher the grade, the more perfect—and, often times, pricier—the coin.

Due to their rarity, grading, and insulation from spot market volatility, Proof American Eagle Gold Coins can achieve greater potential when held for longer periods of time. By nature, their scarcity allows for increased potential. 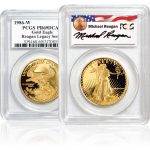 Proof coins are typically produced in lower numbers than their bullion counterparts, so they’re able to achieve a greater level of rarity and appreciation. For example, of the 1999 mintages of the Gold American Eagle coin, nearly 1.5 million 1 oz. bullion coins were issued, but less than 26,000 proof versions were made. This is your chance to bring home the beauty and rarity of Proof Gold American Eagle Coins. Call 1-844-307-1589 today!

Reasons to buy Proof American Eagle Gold Coins are almost too numerous to count. Owning this coin is like owning a piece of American history.

“The American Eagle Gold Proof Coin is 100% American—minted in America by American workers from gold mined in America,” says Diehl.

What's more, it honors President Ronald Reagan, a president who will forever be remembered as the gold standard of American leadership.

The first U.S. gold coin (the Olympic Gold Commemorative Coin) in 51 years was struck in 1984 during Reagan's time office. A year later, Reagan signed the Gold Bullion Act of 1985 and further changed modern American gold ownership forever. This landmark legislation launched the American Eagle Gold Coin Program, a program that has since become one of the most successful U.S. Mint coin programs ever produced. Thanks to Reagan, physical gold is within reach for so many Americans.

Where can I buy 2018 Proof American Eagle Coins?

You can buy 2018 Proof Gold American Eagle coins through U.S. Money Reserve, but only while inventory lasts. All coins are graded PCGS perfect PR-70 or near-flawless PR-69. Due to their highly coveted condition, they aren't expected to remain in stock for long.

Experienced gold owners know that ideally, you want to work toward owning all of the years and denominations of issue for a coin program, also known as a “date run,” and in the highest grade you can afford. The fewer coins in a grade, the more likely a coin could be highly sought after in the marketplace. It’s basic supply and demand.

Consider this: Less than 2 percent of all the $25 Gold American Eagle Proof Coins from 1990 every minted carried the highly desirable PCGS grade of PR-70. Given that fact, a very limited amount of PCGS-graded PR-70 Gold Eagle date runs exist in the world today.

Veteran gold owners also know that diversifying with multiple types of gold, like both bullion coins and proof coins, is a great place to start, but further diversifying with gold and silver coins can provide even more layers of security and peace of mind.

2018 Proof Silver Eagles are also available while inventory lasts. These silver coins are some of the most sought-after coins in the world. Each coin is made from .999 pure silver and struck at the renowned U.S. Mint at West Point. Like their gold counterparts, these limited-release 2018 Proof Silver Eagles feature an iconic American design and are certified by PCGS in the highest grades possible. Could there be a more perfect addition to your precious metals portfolio?

Call 1-844-307-1589 to secure a set of 2018 Proof Gold or Silver American Eagle Coins for yourself. There's never been a better time to better strengthen your financial future than today!