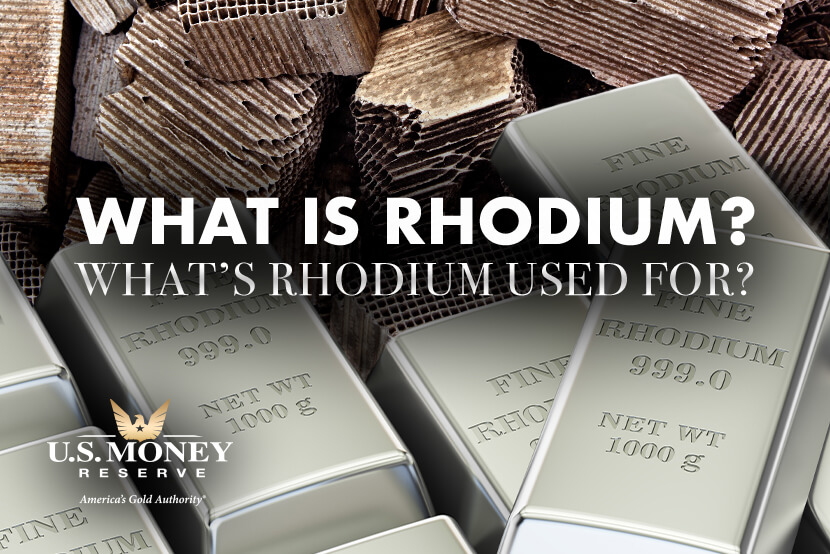 The price of rhodium has soared recently. What about this precious metal makes it so appealing, and what’s behind the recent rhodium frenzy? Learn more about this unique precious metal as we share various global insights.

According to the Live Science website, rhodium is a silver-white metallic element that’s highly reflective and resistant to corrosion. It’s the rarest and most expensive precious metal in the world.

Rhodium is one of six metals in the platinum group, according to Live Science. The others are platinum, palladium, osmium, iridium, and ruthenium.

What Is Rhodium Used for?

Rhodium is usually combined with other materials, such as platinum or palladium, as part of an alloy, according to the Thomas Jefferson National Accelerator Facility. These alloys appear in items such as furnace coils, aircraft engines, electrodes for aircraft spark plugs, and laboratory crucibles.

The most common use for rhodium, though, is in vehicles’ catalytic converters, either as a standalone element or in tandem with palladium or platinum. Rhodium catalysts help cut down on nitrous oxide in vehicle exhaust.

“Without rhodium catalysts, the air in our cities would be much worse due to vehicle exhausts,” Live Science points out.

More than 80% of the demand for rhodium comes from the automotive industry, S&P Global Platts reports.

Because rhodium “is quite brilliant and resistant to tarnishing,” it’s also used as a finish for jewelry, searchlights, and mirrors, Live Science adds.

Where Is Rhodium Found?

English chemist William Hyde Wollaston discovered rhodium in 1803, according to Live Science. He extracted rhodium from platinum ore that he found in South America.

Rhodium is stable enough to be found in its pure form, the Minerals Education Coalition says. It’s a byproduct of platinum, palladium, nickel, and copper mining in the U.S., Russia, and South Africa.

Seattle TV station KIRO reports that because rhodium is found only in small amounts, it’s challenging to mine. Mines in South Africa produce more than 80% of the world’s supply of rhodium.

How Much Does Rhodium Cost Per Ounce?

One South African mining executive expects rhodium to continue its upward price trajectory in 2020. Stepped-up production of environmentally friendly catalytic converters has been pushing up demand for the metal, leading to concerns about a supply shortage.

“Everyone needs this metal, and we are seeing speculators now entering the market,” Jonathan Butler, precious metals analyst and head of business development at Mitsubishi, told Kitco News.

Does all of this rhodium talk have you revved up about precious metals? Check out our top recommendations for tracking gold, silver, and other precious metals prices so you can stay informed.