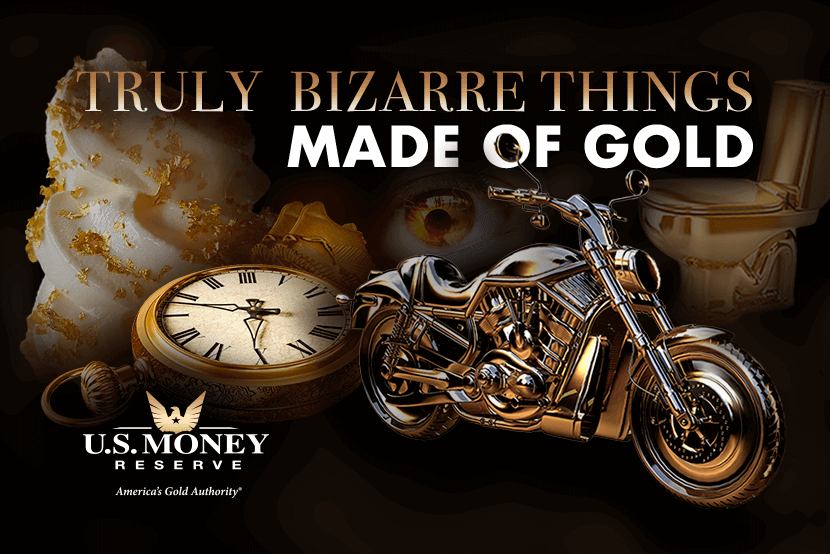 Genuinely Bizarre Things Made of Gold

Make no mistake: Gold is a serious business. As an asset, gold can influence markets, bolster retirement portfolios, and serve as a hedge against global economic uncertainty.

Despite that seriousness, however, visionaries around the world have created some unapologetically odd things made of gold.

Things Made of Gold

Time Is Money—Lots of Money

We’re talking about the gold Patek Philippe Supercomplication pocket watch, potentially the priciest watch on the planet. You’ll need more than $24 million to acquire the ultra-rare timepiece. It sold at auction in Geneva, Switzerland, on November 11, 2014, for $24 million, which is the most anyone has ever paid for a timepiece, reports Forbes.

Keep Your Eyes on the Prize

The limited-edition lenses cost $15,000—a bargain compared to what some gold pocket watches are going for nowadays.

And if some healthcare practitioners are right, gold compounds may even help you leave the contact lenses behind one day. Gold has been shown to have some medical healing benefits, and various gold compounds are currently being tested to treat multiple cancers, reduce rheumatoid arthritis pain, and detect HIV/AIDS.

Admit it: You never think about eating gold when the topic turns to things made of gold. But if you’re in the mood for a rich treat, here’s one for you! One New York eatery sprinkles gold flakes on top of their soft-serve ice cream.

If adding gold flakes to your ice cream doesn’t give you enough edible precious metal, think of how much gold bypassed your tummy when you missed out on the Wispa Gold chocolate bar.

Covered in edible gold leaf and wrapped in a gold wrapper, the Wispa Gold chocolate bar originally went on sale for more than $1,600 in London in 2009.

If you’re in the mood for a gold bar that won’t melt in your car, consider the one-ounce gold bar from the world-famous Perth Mint. You can’t eat it, but it will feed your appetite for fiscal responsibility.

Gold That Gets You Moving

One good exercise is playing basketball. Take your game up a notch with Dominic Chambrone. This sneaker builder created golden sneakers to celebrate one of LeBron James’s many pro basketball achievements.

Sneakers might not be the first thing that come to mind when you think of things made of gold, but here they are! The cost of this pair of gold sneakers? More than $100,000, notes CNBC.

You might have to skip a gold candy bar or two to afford them.

Born to Be (Fiscally) Wild

Not feeling any desire to lace up shiny new kicks and hit the court? Hop on a motorcycle and go for a ride instead. A 24-karat gold-plated bike—which comes with 250 diamonds and a crocodile leather seat—can be yours for $850,000. All 859 of the motorcycle’s components are individually gold-plated by hand.

If your two-wheeled ride finds you at a nice beach, you might happen upon the bikini made of 18k gold and worth nearly $20,000.

Not wild enough for you? Then check out a zoo’s worth of animals available on precious metal coins.

Call it “A Game of Throne,” one that the original owner hopes to eventually win back.

On September 14, 2019, thieves made off with a solid gold toilet installed as part of an art exhibit in the United Kingdom. A $124,000 reward was offered for the working toilet’s safe return, according to CNN.

The “royal throne” is valued at about $6 million.

“Luke, I Am Your Retirement Nest Egg.”

Maybe talking about retirement accounts and nest eggs doesn’t have the same dramatic impact as Darth Vader’s revelatory words to Luke, “No, I am your father.”

Still, owning a 33-pound 24-karat gold version of Darth Vader’s helmet priced at $1.4 million would take the sting out of most familial scandals.

The Further Adventures of Gold

The goose that laid the golden egg has nothing on some of these shiny oddities—and that’s from a fairy tale!

Once your brain recovers from all the strangeness surrounding these things made of gold, we’re here for you. Follow U.S. Money Reserve on Facebook and Twitter for more fun gold information!